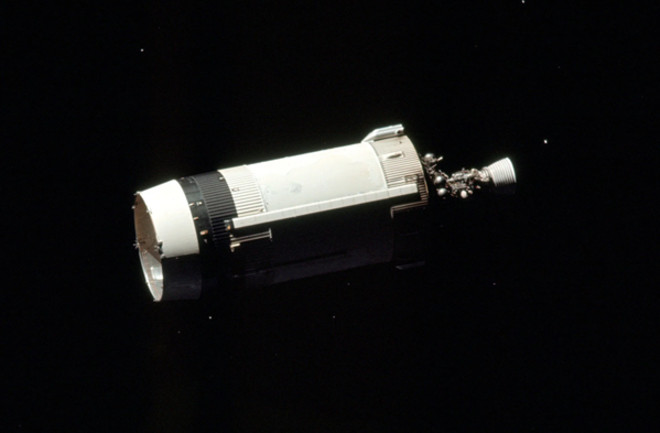 S-IVB, seen floating through space, was originally thought to be an asteroid. (Credit: NASA)

On September 3, 2002, amateur astronomer Bill Yeung discovered an object that he believed was a never-before-seen asteroid in a rapid orbit around Earth. While it’s easy for massive planets such as Jupiter to frequently capture objects like asteroids and comets, Earth is smaller and has less gravitational oomph with which to influence interplanetary passersby.

Yeung’s discovery, formally named J002E3, became the focus of an intense analysis with a unique result. The object was not an asteroid captured by Earth in a cosmic game of coincidence. This was a relic of humanity’s space race: an Apollo-era rocket that had been placed in orbit around the sun — and then returned to Earth.

Yeung was already well known in astronomy circles for his prolific discovery of other asteroids — J002E3 was simply one more to add to his collection. But astronomers at the Minor Planet Center quickly realized that J002E3 was not an asteroid. Its unusual orbit made some suspect that it was, in fact, human-made — a leftover piece of space hardware.

But an analysis of recent launches did not identify any possible candidates for the source of the object. Scientists at the Jet Propulsion Laboratory (JPL) in Pasadena, California, tracing back the object’s trajectory, discovered that it had been captured in April 2002 into Earth orbit from an orbit around the sun that was similar to Earth’s. Backtracking even further, the object appeared to have gotten into its sun-circling orbit after originally escaping Earth orbit all the way back in February 1971.

This gave researchers some potential clues as to the origin of J002E3.

Another team of scientists from the University of Arizona and MIT performed a spectroscopic analysis of J002E3, looking at the light it reflected to search for chemical fingerprints to determine what it was made of. They made a startling discovery: J002E3 appeared to be covered in paint — specifically, white, titaniumoxide (TiO2) paint. According to Kira Jorgensen Abercromby at California Polytechnic State University, who also studied J002E3 while at the Air Force Maui Optical & Supercomputing observatory, “What we saw were features in the spectral data that matched other upper-stage rocket bodies launched during a similar time frame [to the Apollo missions] and the data also matched typical features found in organic paints that looked like TiO2.”

This information pointed toward a very specific object as the identity of J002E3: a spent third stage from an Apollo-era Saturn V rocket, which were historically covered in this specific kind of paint.

The massive Saturn V propelled the Apollo astronauts to the moon and later lofted the Skylab Space Station into orbit around Earth. While 18 complete Saturn V rockets were built, only 13 were ever launched (the rest were built for testing or never used once Apollo’s funding dried up). The Saturn V was a three-stage rocket. The first and second stages of the Saturn V fell back to Earth once they were spent. The third stage, known as the S-IVB, was just under 60 feet (18 meters) in length and, once released, temporarily orbited Earth along with the Apollo spacecraft before being reignited to send its hardware into lunar orbit. Of note, the Apollo 7 mission used the smaller Saturn IB rocket, which also used an S-IVB as a second stage. According to Amy Shira Teitel, host of YouTube’s The Vintage Space, “Without the S-IVB, the Apollo moon landings couldn't have happened.”

If J002E3 was, in fact, a spent S-IVB, the next question researchers asked was, “Which one was it?”

Early test flights with the S-IVB all ended with the third stage splashing into the ocean or disintegrating during reentry. This was also true for the S-IVBs from the Apollo 4, 5, 6, and 7 missions and the Saturn IB flights that carried astronauts to Skylab. The Apollo lunar landing missions numbered 13 through 17 all intentionally crashed their S-IVBs onto the lunar surface to create artificial moonquakes that could be measured by seismic instruments placed by prior landings. But it was the middle Apollo missions (numbered 8 through 12), however, that all intentionally placed their S-IVBs into heliocentric orbits. Any of these missions could have given rise to J002E3.

Further analysis of J002E3 suggested it first left Earth orbit in 1969, narrowing things down to Apollo 9 through 12 (Apollo 8 orbited the moon in December 1968).

This animation, which has the Sun to the left, shows J002E3 being captured into a chaotic orbit around the Earth. (Credit: Paul Chodas and Ron Baalke)

Gone Again, But Not Lost

Many people find the notion of discovering an intact piece of Apollo-era hardware appealing, and these feelings are amplified by the large size of the Apollo S-IVB. “Flown Apollo hardware will always be significant,” says Teitel. “We've been to the moon nine times and most of the hardware that enabled those missions was destroyed — the Saturn V stages crashed into the ocean or were smashed into the moon, most of the lunar module ascent stages were smashed into the moon, and the service modules didn't return. That leaves nine command modules, all of which are on display in museums. Flown hardware has an allure simulators and non-flown items just don't have.”

In the case of J002E3, the hardware is still flying. Shortly after its discovery, the object left Earth orbit in 2003, returning to a heliocentric orbit. But researchers suggest that it may yet be recaptured by our planet, with the first opportunity for recapture coming up in the mid-2040s.