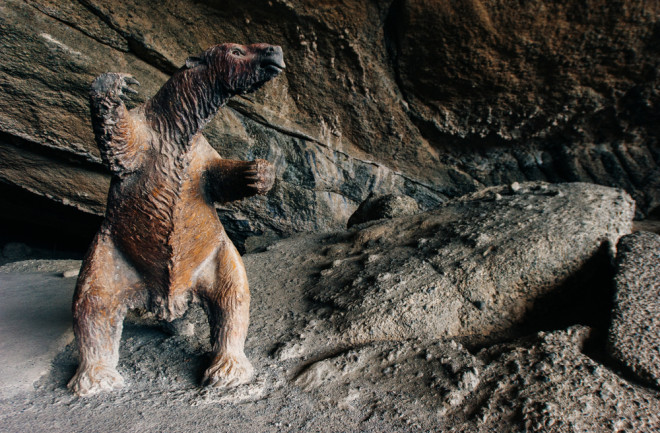 During Charles Darwin’s famous trip on the HMS Beagle between 1831 and 1836, he sailed around the globe and often stepped on land to gather samples and take note of flora and fauna — starting his job as the Beagle’s resident naturalist at just 22 years old. These stops included various South American locales, including Argentina, Uruguay and, of course, the Galápagos Islands.

To his fortune, plenty of eccentric mammals evolved in isolation in South America, since the continent broke off from West Antarctica about 30 million years ago and only joined North America when a land bridge formed about 3 million years ago. As he observed those wonders for himself, Darwin pocketed thousands of specimens. His assemblage of fossils and rocks, along with animal and plant samples, included those of 13 mammal species.

He then passed the objects and observations on to a group of naturalists, including biologist Richard Owen, who designated several new species and helped spark important discourse around natural selection and evolution. Today, around 100 mammal bones and fragments remain from Darwin’s journey, and they range between 10,000 and 500,000 years old. Centuries later, researchers still grapple with these unusual mammals’ complex evolutionary histories.

An 1880 illustration from The Natural History of Animals. (Credit: IgorGolovniov/Shutterstock)

Darwin’s finds included fossils of a glyptodont, a relative of today’s armadillos that was covered in a shell of bony armor. The animals have puzzled evolutionary biologists because they have uniquely adapted skeletons and differ significantly from other species within their order. The Glyptodon doedicurus species wielded a spiked tail, which likely served as a fierce weapon.

Glyptodonts evolved around 35 million years ago in South America, and seemed to gradually balloon in size before their extinction at the conclusion of the last last ice age. One species was considered midsized during the Miocene, at around 180 pounds, but a particularly beefy variety reached over 4,000 pounds by the Pleistocene.

A modern reconstruction of the Megatherium (Credit: Catmando/Shutterstock)

The inquisitive naturalist also encountered Megatherium and Mylodon darwinii, two giant ground sloths. The former claims the title of the largest bipedal mammal in existence. Megatherium reached elephant size in adulthood, weighing around 6 tons (around the size of a small delivery truck). Darwin spotted a Megatherium skull in a cliff face in Argentina in 1832. The creature had been described by a French anatomist in 1796, but scientists lacked meaningful specimens to inspect — until Darwin’s miraculous discovery. He even kept a section of the skull in his home, which wasn’t publicized until 2017.

He came upon evidence of M. darwinii, later named by Owen in honor of Darwin, the same year. The sloth would have measured between roughly 2,000 and 4,000 pounds. A nearly 13,000 year-old M. darwinii bone fragment that popped up in a cave in southern Chile has remained in great shape thanks to the cold and dry surroundings. Work on the bone fragment has suggested that M. darwinii diverged from the modern-day two-fingered sloths around 22 million years ago. They were herbivores, like their sloth relatives, but didn’t scale trees or dig underground.

M. darwinii went extinct approximately 10,000 years ago, and Megatherium disappeared around 12,000 years ago. Some paleontologists claim that human hunting significantly contributed to the decline of giant ground sloths and other South American megafauna, but others contend that it’s mostly climate-related.

These elephant ancestors may have cropped up during the Miocene epoch in Africa around 22 million years ago. Gomphotheres made their way to South America (where Darwin happened upon them), along with North America and Eurasia, and hung out in marshes, forests and grasslands. South American Gomphotheres are thought to have died out in the late Pleistocene or early Holocene.

Like today’s elephants, Gomphotheres had tusks. They also shared with elephants humongous molar teeth that moved like a conveyor belt system (bigger teeth moved from the back of the mouth to replace worn-down chompers throughout their lives).

Darwin perceived this bizarre mammal as elephant-sized with rodent-like teeth and the face of a manatee. For that reason, he called it “perhaps one of the strangest animals, ever discovered.” The bewildered geologist was one of the first to collect fossils from the Toxodon species called platensis. T. platensis probably grubbed on a diverse mix of foods like grasses and, surprisingly, avocados.

Only relatively recently have scientists determined that T. platensis likely shares a common ancestor with rhinos, horses and tapirs, thanks to protein analysis of bone collagen. Like its giant modern relatives, the creature was huge — the Toxodon was thought to weigh over a ton, comparable to the African black rhino. And like the black rhino, it was probably quite speedy for its size.

The Toxodon presented itself to Darwin in the form of a skull in Uruguay, and he bought it for roughly $10.26 at today’s rate. Evidently, the price was worth it: Darwin claimed that the fossil was one of the most important finds from the South American journey.

A 1913 vision of the Macrauchenia patachonica. (Credit: Robert Bruce Horsfall/Wikipedia)

This peculiar mammal looked somewhat like a camel and weighed between 850 to 1,100 pounds. Darwin found Macrauchenia remains in Patagonia in 1834 and struggled to decipher its mysterious origins and extinction.

One of the oddest characteristics: The position of its nasal opening differed from the majority of mammals, which usually sits above the front teeth. In the Macrauchenia patachonica, the opening was located in the middle of the eye sockets. Like Darwin, Owen was also flummoxed, and initially proposed a connection to llamas that was later disproved. To his credit, it was hard to figure out with limited technology because they don’t have any close living kin.

It wasn’t until 2017 that we truly got to know M. patachonica. Scientists examined mitochondrial DNA from a fossil unearthed in a southern Chile cave and found that M. patachonica is related to the surviving Perissodactyla group, which T. platensis is also tied to. Like other lengthy paleontological debates, this revelation arrived after 180 years of squabbles between researchers — unfortunately, too late to satisfy Darwin’s curiosity.