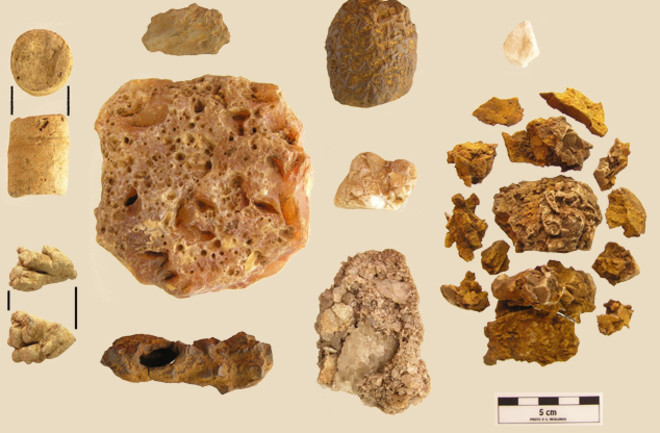 Stones from a pre-Colombian shaman's cache in Boquete, Panama. A stash of stones uncovered in a prehistoric dwelling in Panama could be the earliest evidence of traditional healing, or shamanic practice, in lower Central America. Archaeologists used radiocarbon dating of charcoal samples located directly above and below the stones to estimate that the stones were left in the dwelling sometime between 4,000 and 4,800 years ago. Since the stones were clustered together, the researchers say the collection was probably deposited in a container that has since decomposed. The twelve stones, unearthed by archaeologists from the Smithsonian Tropical Research Institute, included quartz and pyrite among other rocks, many of which had been fashioned into tools or showed signs of wear and tear from human use. Since these types of stones are not typically found in this region of Panama, researchers have suggested the collection was carefully curated for a specific purpose, such as shamanism. Today traditional healers in this area often use similar crystals for rituals and transformative experiences, which suggest that their prehistoric predecessors may have done the same. The prehistoric shelter has been studied on numerous occasions since it's discovery in 1970, but the stones weren't found until 2007. Their significance was described in a recent paper in Archaeological and Anthropological Sciences. The first occupants of the stone shelter made it their home more than 9,000 years ago, long before the supposed shaman and his crystals took up residence there. The effectiveness of the shaman's crystals, however, is not so apparent in the fossil record. Image courtesy of Ruth Dickau.