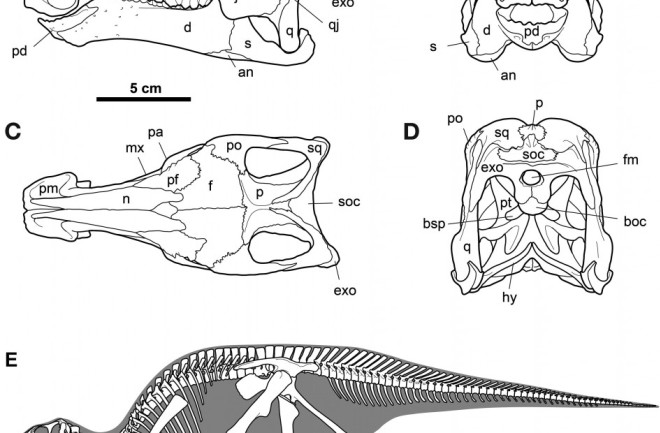 A skeletal reconstruction of new dinosaur Gobihadros mongoliensis, based on multiple individuals including a rare, virtually complete specimen. (Credit: Tsogtbaatar et al, 2019) Toothy tyrannosaurs and enormous titanosaurs may be the most dramatic dinosaurs of the Late Cretaceous, but plant-eating hadrosaurs had the numbers. These widely-distributed animals, often called duck-billed dinosaurs, are among the most commonly found fossils from the period that stretched 66 million-100 million years ago. Yet the hadrosaur origin story remains a bit of a mystery. Today, a magnificent new find from Mongolia fills in some of the gaps. Paleontologists unearthed multiple specimens of newly described Gobihadros mongoliensis from southeastern Mongolia. The crown jewels of the discovery are a virtually complete skeleton of an individual that was about 10 feet long — the fossil includes a slightly crushed skull — and a pristine, complete skull from a second individual. All of the fossil material is about 85 million years old, dating to the Santonian, which falls in the middle of the Late Cretaceous. The Santonian appears to be a key time for hadrosaur diversity and dispersal, but paleontologist didn't have many high-quality fossils from certain branches of the duck-billed dino family tree. That made it tough to figure out what was going on with these populous plant-eaters — and it's why Gobihadros is important. Bills, Bills, Bills A brief refresher on duck-billed dinos: Your basic model of a hadrosaur was a large-bodied herbivore notable for its specialized jaws and teeth. The front of the snout was flattened (the whole duck bill thing) and behind it were teeth efficient at grinding the plant matter it ate. It had a bulky torso (gotta digest all that fibrous plant matter somewhere) and a stiff tail. Once thought to be bipedal, hadrosaurs are now believed to have walked on all fours, though some species may have taken the occasional awkward two-legged gambol. More evolved, or derived, hadrosaurs often had elaborate crests and other headgear, the purpose of which remains under debate. If you want to keep it simple, you can call all duck-billed dinos hadrosaurs, but that would skip over the nuance of why Gobihadros matters. The team behind the find describes the new dinosaur as a non-hadrosaurid hadrosauroid, and nested in that term is the animal's value to science. But I don't feel like typing that bulky term over and over, so I made a Venn diagram to explain it:

The first hadrosaurs on the scene, way back in the Early Cretaceous (100 million-145 million years ago), were your basic hadrosauroids. Some hadrosauroid lineages evolved enough distinctive traits, over millions of years, to form their group-within-a-group, the hadrosaurids. They were still hadrosauroids, just more evolved, or derived, from the original models. By the Late Cretaceous, including the Santonian, most of the hadrosaurs running around worldwide were hadrosaurids. Yet Gobihadros, which was not a fancy, highly derived hadrosaurid, was still around, apparently doing just fine despite being a less derived hadrosauroid. Having Gobihadros in East Asia at the time it lived is helpful because it establishes two things. First, that hadrosauroids were still around in that region. Second, the great preservation of the specimen allowed paleontologists to analyze the often-subtle differences in anatomical traits. They were able to determine that Gobihadros is not closely related to more evolved hadrosaurids that show up on the same landscape towards the end of the Late Cretaceous. These later species do have a great deal in common with North American hadrosaurs, however. That means, suggest the authors, that the later hadrosaurids did not descend from Gobihadros. More likely, they evolved in the Americas and meandered over into Asia via Beringia. You may know Beringia as the large region of land, now underwater between Siberia and Alaska, that was exposed during the last Ice Age, roughly 20,000 years ago. The First Americans travelled from Asia through Beringia to reach the Americas (though researchers still debate whether their initial route was through the interior or along the coast). The truth is, Beringia has come and gone many times over the last 100 million or so years, emerging whenever sea levels dropped. Just as it brought humans to the New World for the first time, it also served as a hadrosaur highway, in the opposite direction, more than 70 million years ago. The study appears today in PLOS ONE.