Today’s depictions of agile, often feathered animals are a far cry from the saggy tail-draggers of yesteryear. How did early research get it so wrong? 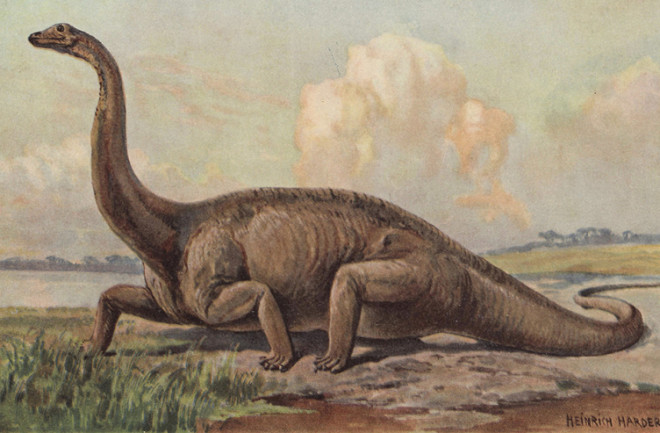 Scientific inaccuracies abound in this 1916 illustration of a tail-dragging, sprawled-posture Diplodocus by Heinrich Harder. A century later, we know better thanks to a richer fossil record and more rigorous research. (Credit: Florilegius/Alamy Stock Photo)

In 1842, English anatomist Richard Owen proposed the term dinosauria for the strange animal fossils he and colleagues had begun to study. Owen drew from ancient Greek to create the word: deinos, meaning “terrible” in the awesome-to-behold sense, and sauros, “reptile” or “lizard.”

The truth is, those early paleontologists — and generations of their successors — got those terrible lizards, well, terribly wrong: T. rex as a tail-dragging lunk, tank-like Iguanodon, long-necked sauropods submerged in water because surely they were too big to walk on land.

One problem early paleontologists faced was that they were limited to merely looking at a fossil and finding a living animal to compare it with visually.

“Dinosaurs were very alien, very different,” says University of Leicester paleontologist David Unwin. “[Paleontologists] tried to force them to fit into paradigms that didn’t exist then.”

Matthew Lamanna, assistant curator of vertebrate paleontology at Pittsburgh’s Carnegie Museum of Natural History, agrees that early paleontologists were restricted by what they could compare dinosaurs to — and how they understood the broader living world.

“Remember the origin of the word dinosaur predates the theory of evolution,” Lamanna says. “Ideas about animal [species] being transitional had yet to materialize. Now we know that dinosaurs are sort of bizarre croc-birds, but back then the concept would have been very hard to imagine.”

Early on, a few great minds did suspect that science might be getting dinosaurs wrong. Comparative anatomist Thomas Henry Huxley, for example, noticed similarities in the body plans of dinosaurs and birds as early as the 1860s. He thought there might be an indirect evolutionary relationship, though he never claimed birds descended from dinosaurs.

But Huxley — often called Darwin’s bulldog for his staunch support of evolution — couldn’t rally others to the idea. It would be more than a century before the dinosaur-bird connection gained traction.

And it was a long hundred-plus years. Interest in dinosaurs was growing in both academic and public spheres, and research standards were often less than rigorous. In lecture rooms and museum halls, the idea of dinosaurs as overgrown lazy lizards was so dominant that it verged on the absurd.

Consider the Diplodocus debate of the early 20th century. After acquiring a specimen of the massive sauropod, Carnegie Museum paleontologist William Holland and colleagues mounted it for display in an elephant-like posture. We now know this was the right approach: legs directly beneath the body, rather than the sprawled stance of a reptile.

The move brought howls of disapproval, most pointedly from two paleontologists, American Oliver Hay and German Gustav Tornier, who insisted that the 80-foot-plus animal had walked like a reptile.

“Holland had a spectacular rebuttal,” says Lamanna, referring to a withering 1910 paper by the Carnegie paleontologist, which included illustrations based on Tornier’s claims. “Holland articulated the skeletons in the sprawling posture, but their ribs were so damn deep that they projected below the body.”

As Holland drily pointed out in the retort, if his critics were right about the dinosaur’s stance, “the Diplodocus must have moved in a groove or a rut. This might perhaps account for his early extinction. It is physically and mentally bad to ‘get into a rut.’ ”

Paleontologist John Ostrom’s 1969 description of agile Deinonychus antirrhopus (shown here in an illustration by Bob Bakker, his student at the time) ushered in a new way of understanding dinosaurs. (Credit: Robert Bakker/J. Ostrom et al., Courtesy of the Bullletin of the Peabody Museum of Natural History 1969)

Research waned during and immediately after the world wars, but at the same time, dinosaurs’ sheer weirdness made for perfect escapist fare in movies such as 1933’s King Kong. In fact, Hollywood and pop culture’s embrace of dinosaurs may have set research back. According to veteran dinosaur illustrator Gregory Paul, writing in The Princeton Field Guide to Dinosaurs, “the very popularity of dinosaurs gave them a circus air that convinced many scientists they were beneath their scientific dignity and attention.”

While the idea of dinosaurs as lumbering lizards persisted, research didn’t come to a standstill. Postwar expeditions to Mongolia and China, mostly by Soviet and Polish scientists, unearthed many new species that couldn’t be forced into the traditional reptile stereotype, such as the monster-clawed enigmas Therizinosaurus and Deinocheirus.

It was a Yale University team in the mid-’60s, however, that ushered in a new era for the terrible lizards.

The team, based near Bridger, Mont., and led by John Ostrom, found numerous fossils of an animal he would later name Deinonychus antirrhopus. Some pieces had been discovered in 1931, but Ostrom was the first to grasp the dinosaur’s significance.

In 1969, he laid out a case for Deinonychus as an “active and very agile predator” that was potentially warmblooded. In subsequent research, Ostrom went a big step further: He compared his famous find with specimens of the earliest-known bird, Archaeopteryx, and made the link Huxley had stopped short of a century earlier: Birds evolved from dinosaurs.

Ostrom’s theory, bolstered by additional finds, reignited interest in the field. And if Huxley was Darwin’s bulldog, Ostrom had his own bold champion in former student Bob Bakker, whose larger-than-life personality was perfectly sized to take on the establishment.

“Bakker argued that even the least birdlike dinosaurs were more birdlike than we thought,” says Lamanna, who cites the paleontologist’s 1986 book The Dinosaur Heresies as personally influential.

Evidence mounted in support of Ostrom and his new school of thought. But stalwarts of the Old Lizard Guard remained — until another extraordinary discovery in the mid-1990s.

In 1995, a farmer in northeastern China found a feathered dinosaur. “It was the final piece of the puzzle,” Lamanna says. “The skeptics had to admit that dinosaurs were progenitors of birds because feathers are such a uniquely avian characteristic. It was one of those rare moments in science where the answer is so clear it’s like getting hit over the head with a two-by-four.”

“These dinosaurs had feathers with a central rachis, veined, barbed,” says Lamanna, referring to their advanced structure. “They were modern feathers for all intents and purposes.” The last holdouts to the dinosaur-bird connection caved.

Dinosaur feathers in amber from Myanmar are another link to the animals’ descendants: birds. (Credit: RSM/R.C. McKellar)

Additional feathered finds — both filamentous and fully developed — continue to emerge. In December 2016, for example, researchers described a fully feathered, partial tail of a dinosaur preserved in amber from Myanmar.

Myanmar, also known as Burma, is an emerging hotspot for fossil discoveries, illustrating another phenomenon changing our understanding of dinosaurs. More people looking in more places means more fossils are seeing the light of day. Some of the most stunning recent finds have come from Argentina, Morocco, Australia and Niger. Dinosaurs have now been found from the Arctic Circle to Antarctica.

Technology is also a driving force.

“We’ve got more fossils, which is great,” Unwin says. “But it’s laptops and mainframes that are the foundation of this field moving forward. Digitization has had the biggest impact on how we describe the past.”

Lamanna sees some of the biggest strides — no pun intended — being made in how dinosaurs moved. For starters, let’s nail the coffin shut on the whole tail-dragging thing. Dinosaurs did not walk like crocodiles.

“We’ve found a lot more skeletons, and we also have hundreds of fossil trackways, preserving dinosaur footprints,” says Lamanna. “If you watch a crocodile walking, you’ll see its tail leaves a significant furrow, something we don’t see very much with dinosaurs.”

Unwin agrees, adding that digitization allows paleontologists to model movement in a way that would have been impossible a few decades ago. “We might not be able to tell how T. rex moved yet, but increasingly we can tell you how T. rex didn’t move,” he says.

As passionate as paleontologists get about advances in their field, one imagines they’re no more excited than their predecessors once were about their theories. Might we one day find that our early 21st-century reconstructions are just as flawed as the reptilian beasts imagined in the Victorian era?

Unwin doubts it, noting modern paleontology’s methods: “Computers allow us to approach our research more like they do in astronomy and physics and other hard sciences. We’re moving away from the qualitative, subjective approach and toward quantitative modeling. We’re producing very rigorous work. Thirty years ago we never had anything like the datasets underpinning our research now.”

Lamanna is more cautious: “I’m sure we’re doing things now that we’ll regret one day, too.” Some things, after all, never change.

Read more: The Many Iterations of Iguanodon

Senior editor and dinosaur lover Gemma Tarlach cried through much of Jurassic World.