Even ginkgo trees that have been alive for centuries display little signs of old age. 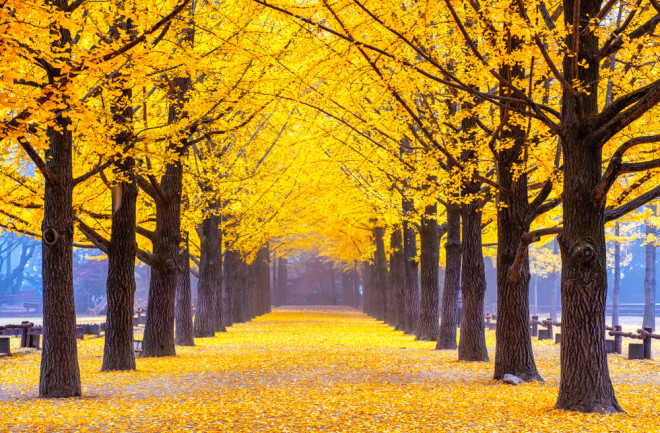 A single Ginkgo biloba tree might drop its distinct fan-shaped leaves every year for centuries, if not millennia. For perspective, one that’s about 1,300 years old — nearing the upper limits of documented ginkgo lifespan — first sprouted when the Byzantine empire was still young.

And as ginkgo age, they don’t just survive — they thrive. Though 600-year-old ginkgos grow thinner annual rings, they're likely to pump out just as much defensive and immune-supporting chemicals as their younger relatives, according to new research published in the Proceedings of the National Academy of Sciences.

From this data, it appears that Ginkgo biloba, native to China, don’t have a predetermined lifespan. Unlike annuals that die off every year, “there’s no end point in their ability to keep growing," says Rick Dixon, a biochemist at the University of North Texas and co-author of the paper.

Not only do individual ginkgos grow old, the entire species is prehistoric; some fossilized leaves date to 200 million years ago. Understanding aging in these long-lived, ancient species is difficult, however. Study co-author Jinxing Lin of the Beijing Forestry University was already deploying genome-sequencing technology to decode the ginkgo longevity techniques before Dixon entered the project.

The team focused on the cambium, or the surface layer that grows each year, creating trees' annual rings. DNA sequences and genome analysis from nine ginkgos — with ages around 20, 200 or 600 years old — showed that genes responsible for thickening each layer were less active in the older trees.

But other signs of aging didn’t appear. Most plants eventually reach senescence — or, as Dixon puts it, a period of “gradually croaking.” Genes responsible for that life phase weren’t any more active in the oldest ginkgo specimen.

Ginkgos, like other trees, produce antioxidants and antimicrobials to stay healthy, too — redwoods have such a high concentration of the latter, the molecules give the species its distinct hue, Dixon says. The various genes needed to produce those compounds appeared to be just as active in the old ginkgo trees as they were in the young ones, as were genes related to the ginkgo immune system.

With a strong immune system and no sign of senescence, “there’s no programmed mechanism for death that we could ascertain from [this] study,” Dixon says.

Secrets to a Long Life

As for how ginkgos have dodged clear signs of decay, Dixon says it’s not clear. If stressed or sick, many types of trees will devote more of their energy stores to immune defense instead of growth, he says. But it's unclear if ginkgos reallocate resources that way.

Dixon does think it’s possible similar mechanisms are at work in other long-lived species, such as redwoods (which have an average lifespan of 800 to 1,500 years) and English yew (which aren’t considered “old” until they’re 900 or so.)

Dixon points out that they didn’t measure actual levels of antioxidants or immunity boosters in the trees — just the genes indicating their presence. Also, the team only studied the cambium for signs of aging. The root system probably deserves some attention too, Dixon says.

Next up, the team might see if Ginkgo biloba DNA, like our own genetic code, gains mutations as the tree ages. But, who knows: The tree might have a way to prevent that, too.