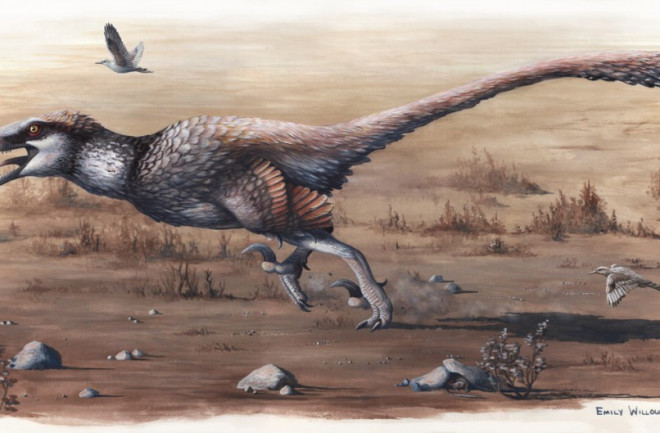 An artist's rendering of Dakotaraptor steini. (Credit: Emily Willoughby) Scientists have discovered the remains of one of the largest raptors known to man in the fossil graveyards of North America. A research team led by Robert DePalma, curator of vertebrate paleontology at the Palm Beach Museum of Natural History, discovered the partial skeleton in the Late Cretaceous (66 million years old) Hell Creek Formation of Harding County, South Dakota. They’ve named the raptor Dakotaraptor steini, and it is the second recently named raptor from Hell Creek. Known from a partial skeleton, it represents one of the largest known dromaeosaurids, the scientific name for what are popularly known as ‘raptors’, and close relatives of the first birds.

Sizing Up the Field

Popularized by “Jurassic Park” movies, ‘raptors’ are known for being fast, nimble, small dinosaurs with stiff tails and feet equipped with wicked sickle claws. Dakotaraptor is estimated to have been around 16 feet in length, so it’s still nowhere near the size of other gigantic predators around the same time, like Tyrannosaurus rex. But compared to Velociraptor, which was roughly the size of a turkey, Dakotaraptor is among the biggest (and most dangerous) raptors known. The only competitor would have been its close but much older cousin, Utahraptor, which the largest skeletons reveal could have grown up to 22 feet in length and weighed up to 1,100 pounds.

Skeletal reconstruction of Dakotaraptor based on available material for Utahraptor, Dromaeosaurus, Deinonychus, and Achillobator, demonstrating overall proportions and the large size of the creature. (Credit: Robert DePalma) The sickle claw on the middle toe of Dakotaraptor was used as a lethal weapon and measured 9.5 inches along the outer curve. Scientists are still not sure whether these claws were used for disembowelling prey, or clinging on to them like a crampon, but either way, having a claw that large stuck in you would be pretty painful. DePalma and colleagues published their work in the Kansas University Paleontological Contributions.

Whether or not Dakotaraptor would have hunted in packs, as popularly reconstructed, is still open for debate, as well. Some dromaeosaurids have been found with track evidence of moving together, and even feeding together, while some large tyrannosaurids like Yutyrannus definitely would have hunted in packs. “I think there is at least moderate evidence that some dromaeosaurids were pack hunters, but it's not a slam dunk that all of them were, or that they normally hunted this way,” says Steve Brusatte, a dinosaur researcher at the University of Edinburgh, and not associated with the study. The jury is still out on whether Dakotaraptor was a lone hunter, or roamed with a raptor pack.

While some dromaeosaurs like the notorious Velociraptor are known to have had at least feathers covering their arms, resembling superficial wings, the presence of feathers in larger dromaeosaurids remains controversial. Dakotaraptor possesses a row of ‘quill knobs’, or papilli, on the surface of its ulna, one of the lower arm bones. In modern birds, these reinforced knobs show where the feather quills would have attached, and is clear evidence that while Dakotaraptor would have been unable to fly due to its size, it would have had feathers on its arms. While other large dinosaurs, like Yutyrannus, show evidence of a bristle-like ‘protofeather’ coat along their body, Dakotaraptor is the largest dinosaur found with true wings. Brusatte thinks there are two main reasons why Dakotaraptor had feathers if it couldn’t fly: “Either it evolved from an ancestor that could fly but had lost the ability to fly, like an ostrich, or dinosaurs evolved big quill-pen feathers for another reason, such as display or egg brooding.” Under the second case, this means that only later on in the evolution of feathers did they become suitable for flight.

The discovery of Dakotaraptor raises some questions about where it would have fitted in the food chain in the Hell Creek ecosystem. Previously, different growth stages of T. rex were thought to have occupied every carnivorous niche, and out-competed any other possible large predators. Dakotaraptor might have avoided direct competition with T. rex by adopting a different style of hunting: while young T. rex had long legs built for pursuing prey over longer distances, Dakotaraptor seems to have been more lightly built, the perfect killing machine for ambushing and grappling with its prey. “Dakotaraptor very well may have been filling a similar niche as a pre-teen T. rex. That's a chilling thought on Halloween...” says Brusatte.