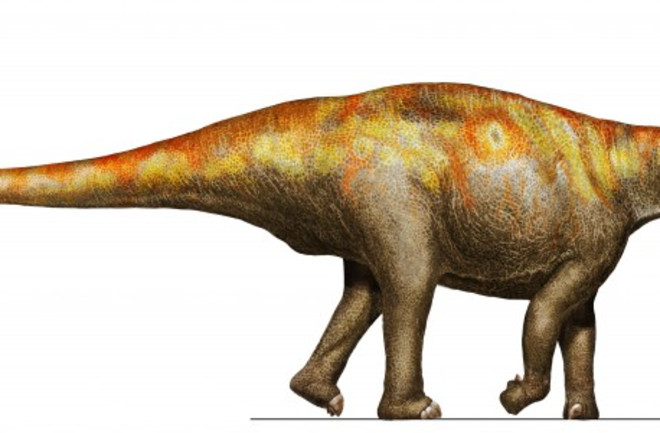 Paleontologists Emanuel Tschopp and Octávio Mateus, authors of the new study, contemplate G. pabsti's noggin in an artsy shot I rather like. (Credit Octávio Mateus) If you want to sum up the sauropods, the group of herbivorous dinosaurs that include the largest land animals ever to stomp across our world, it's easy: little head, long neck, cow-like body and a whip-like tail. Or even more simply, as the exacting Anne Elk once put it, brontosaurus and other sauropods are "thin at one end, much, much thicker in the middle and then thin again at the far end." While those tidy summaries are true, they obscure the curious diversity among sauropods: differences in body proportion, skull shape, robustness of frame and other features have long puzzled paleontologists, because many of these similar-but-not quite-the-same animals shared territories with each other. And now along comes Galeamopus pabsti, a sauropod from the Late Jurassic of about 155 million years ago. G. pabsti was actually unearthed more than 20 years ago, but its status as a distinct species is only now being recognized. Hiding In Plain Sight The blue-ribbon dinosaur is named not after the beer but after Ben Pabst, one of the paleontologists who found it in northern Wyoming in 1995. Pabst also prepared the partial skeleton for display at the Aathal Dinosaur Museum outside Zurich, Switzerland, where visitors marveled at the dinosaur without quite knowing what they were looking at until now. The site where G. pabsti was found has yielded a pile of other fossils as well, including the partial remains of several other sauropods, a couple other dinosaurs, a bunch of bitey theropod teeth and even freshwater shells. Several of these finds have yet to be studied closely enough for classification. More broadly speaking, the Morrison Formation, the general deposit running through north-central Wyoming, has more than a dozen sauropod species that apparently shared the space. It's actually the richest area in the world to find these big-in-the-middle-but-little-at-both-ends animals. Old Bones, New Stories But back to G. pabsti, also known as "Max." According to a new study published today in PeerJ, paleontologists Emanuel Tschopp and Octávio Mateus took a good look at the museum mainstay and realized it was a previously undescribed species, most closely related to Galeamopus hayi — another specimen which the duo re-examined and renamed in 2015. I know what you're thinking: wait a minute, how can these guys go around looking at dinosaurs already hauled out of the ground, decades ago, and declare they're new species? Well, more and more in paleontology, as methods for collecting and processing data become more advanced, researchers are going back and re-examining previous finds, sometimes refining and sometimes overturning conclusions. It might not seem as exciting as taking a chisel to sun-baked dirt in the field, but tapping away at a keyboard is fast becoming the main way paleontology advances. One interesting point that emerged in the paper was discovering that Max was a young adult. Previous study of the fossil suggested it might be a juvenile, but the latest look shows it had reached sexual maturity but not yet finished growing — impressive, considering that some estimates put Max at about 14 tons when alive. The often-subtle differences between G. pabsti and G. hayi, as well as what separates them from close relatives such as the better-known diplodocus, are all detailed in today's open-access paper — all 126 pages of it — so feel free to give it a read. You might recall Tschopp as the man who brought brontosaurus back to life (with help from Mateus and another researcher). The iconic dinosaur, beloved by many but dissed for decades by researchers as nothing but a misidentified apatosaurus, was re-established as a legitimate species in 2015 thanks to the paleontologists' sophisticated data analysis.

Epic dino reconstruction of one G. pabsti gazing inscrutably at the carcass of another of its kind being devoured by a trio of therapods. (Credit Davide Bonadonna)