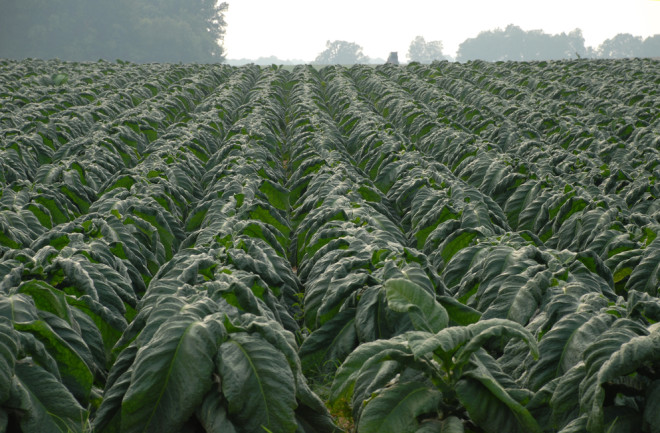 (Credit: Raymond Gregory/Shutterstock) It is notorious for its role in the expansion and continuation of American slavery, and for its adverse health effects. The latter includes cardiovascular disease and various cancers, including lung cancer, the most common malignancy, underlying millions of deaths each year. Health officials, attorneys, and activists have spent decades targeting its industrial cultivators in an effort to limit its advertising and sale, particularly to minors. We are talking about tobacco. If at a frustratingly slow pace, tobacco use has been declining over the past 40 years in the United States, because health awareness programs are having a significant effect. A typical first-grader could explain why it is bad to smoke. So could the CEO of a tobacco company, and so could any farmer cultivating tobacco in places like Virginia, Kentucky, Tennessee, or the Carolinas, where the crop still plays a major role in the economy. Many such farmers might rationalize that they remain in business to satisfy people who are already addicted, but others have turned over a new leaf — pun intended — in recent years. Some farmers have replaced the “filthy weed” altogether with something that grows in the same kind of environment, such as chickpeas — a crop change that takes advantage of the nation’s growing palate for hummus and falafel. But biotechnology is facilitating an additional pathway: utilization and redirection of the tobacco plant toward applications other than delivering nicotine and carcinogens into the human body. An increasing number of non-traditional applications of tobacco are emerging and range from growing medicines to synthesizing jet fuel. If the fuel is energetic enough for at least some of these ideas to take off, it won’t make tobacco less addictive, but it could enable the industry to remain aloft without continuous need for new generations of children to become nicotine addicts.Tobacco Ban on Passengers Does Not Apply to the Aircraft Itself As cultivation of tobacco started decreasing in North America in the late 20^th century, it started ramping up in Africa and Asia. To support world consumption of cigarettes, cigars, and other unhealthy products, the plant is produced in mass quantities that are challenging to redirect to other ends. But another product that humans do use is in mass quantities is fuel, especially when it comes to flying. A Boeing 747 burns more than 10 tons of fuel per hour while cruising, or nearly 4 liters (one gallon) each second.

A Solaris tobacco plant. (Credit: Solaris) That’s a lot of petroleum to pull out of the Earth, but, with Boeing’s help, South African Airways is working to produce its own biofuel with the tobacco plant as the top candidate. It makes sense if you recall that one of the hundreds of categories of carcinogens in tobacco is tar — hydrocarbon compounds, like those in coal and petroleum, which release energy when burned. Specifically, it’s Solaris tobacco, which is cultivated in the Limpopo Province and genetically engineered to produce almost no nicotine, but loads of oil, particularly in the plant seeds. In fact, the first biofuel-powered commercial planes in Africa transported 300 passengers from Johannesburg to Cape Town on July 15. The Boeing jets were, in part, fueled with Solaris tobacco plants, and the airline aims to use biofuel in routine flights by next year.

So if you fly to South Africa any time from 2017 onward, fear not that prohibition of smoking in the air or at the airport is harming is depriving tobacco farmers of income. Pharmers and Plantibodies The past several years have seen the emergence of a new field called plant molecular farming (PMF) — those working in the area sometimes refer to themselves as “pharmers”. PMF is based on the idea that plants offer several advantages over other bacteria or animals as recipients of genes transferred to make quantities of particular proteins. The classic example of a genetically engineered medical product is the hormone insulin. For many decades, diabetics depended on insulin from cows and pigs, but today they receive human insulin, produced in bacteria using the human insulin gene. Researchers have been genetically modifying goats to produce a variety of pharmaceuticals, including insulin, in their milk, with hopes of boosting the quantities that can be synthesized. Genes have also been engineered into yeast and other categories of organisms.

But plants have several advantages. For one, they are fairly easy and cheap to utilize in early tinkering. Whereas you need a sophisticated lab to crank out new drugs from bacteria and yeast, genetically modified plants can be cultivated in a small greenhouse. Being eukaryotes, like animals, plant cells are capable of doing to gene products all of the things that usually happen after an animal cells translates a gene into a sequence of amino acids that becomes a protein. These are called post-transcriptional changes and they’re different in a bacterium. When it comes to producing a protein such as an antibody, which is complicated by folding of the amino acid chains in specific locations, the capabilities of plant cells really shine. Add to this the fact that, in contrast to using animals, plants modified to produce human or mouse antibodies — known increasingly as “plantibodies” — do not carry the risk of contaminants that cause disease in humans. As with the tinkering stage, when an antibody drug is ready for mass production, plants make for cheaper factories compared with animals. Using a tobacco strain called Nicotiana benthamiana, pharmers in Kentucky have been producing plantibodies that constitute the drug ZMapp, which has shown promise against Ebola virus in clinical trials. Another tobacco species, Nicotiana tobaccum, has been modified to grow protein and glycoprotein (protein-carbohydrate) agents useful as drugs against cancer and HIV/AIDS. So while we may look back at the last 400 years of tobacco history and sigh at the thought of all the lives that the plant has taken, at least we can do so with hopes that an new age now beckons, both for human health and the notorious weed.