Compelling Images captured from orbit revealed our planet in all its beauty and fury during the year just gone by. 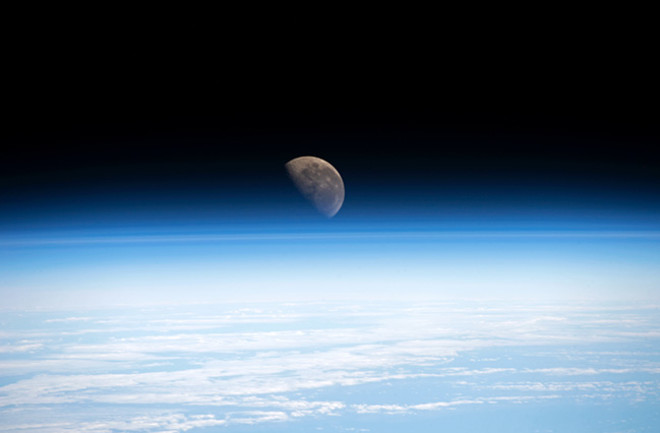 A crew member aboard the International Space Station took this photo on May 2022. (Credit: NASA Earth Observatory)

In my original conception, this column was going to emphasize compelling images of our planet, many of them acquired from space. Thus, the name: ImaGeo, a mashup of Image and Geo, as well as the tagline for the column: the intersection of imagery, imagination and Earth.

With that in mind as 2022 was drawing to a close, I sorted through multiple sources of remote sensing imagery to select ten particularly compelling examples from the year now gone by. This article features five of those images. I'll follow up soon with a second article featuring the other five of my favorite images of the year.

Let's start with the photograph above. It was taken by a crew member aboard the International Space Station while orbiting more than 250 miles above the South Pacific Ocean. The oblique view features Earth’s horizon, known as the limb. It enables us to see layer upon layer of atmosphere, along with the waning-gibbous Moon shining through the thinnest layers. (The photograph was first featured by NASA's Earth Observatory in their "Image of the Day" feature. For a full-size version, check out their story, "An Atmosphere of Exploration.")

Oblique views of Earth as seen from space can be particularly dramatic, as this next image also demonstrates:

Hurricane Ian, as seen by the GOES-18 satellite on Sept. 28, 2022 just after it made landfall near Cayo Costa, Florida. With maximum sustained winds of 150 miles per hour as it blasted ashore, Ian tied the record for fifth-strongest hurricane on record to strike the United States. (Source: Satellite Liaison Blog.)

This sprawling cyclone is Hurricane Ian, just as its eye was making landfall near Cayo Costa, Florida on Sept. 28, 2022. Born of a tropical wave over the west coast of Africa, the storm spun up rapidly into a hurricane that first thrashed Cuba before blasting ashore in Florida. With maximum sustained winds at landfall of 150 mph, Ian pushed up inundating storm surges that caused enormous devastation along the state's Gulf coast.

Ian's portrait at landfall seen above is called a “sandwich’ satellite product. It combines light gathered in the visible and infrared portions of the electromagnetic spectrum, providing meteorologists with valuable information for analyzing the evolution of storms. (Note that this is a screenshot from an animation featured by the Satellite Liaison Blog. I've done a little processing to help clarify features of the storm.)

The eye of Hurricane Ian is seen in this Landsat 8 image just prior to landfall on Florida's southwestern coast on Sept. 28. (Credit: NASA Landsat Image Gallery)

As Ian was churning toward Florida, the Landsat 8 satellite was in an ideal position to view it — as this dramatic closeup of the storm's eye three hours before landfall shows.

The turquoise waters of the Gulf of Mexico peak through the relatively fair weather at the storm’s center, which is surrounded by a towering ring of powerful thunderstorms that make up Ian's eyewall. (For a clickable, full-sized version of the image featuring amazing detail, check it out here at NASA's Landsat Image Gallery.)

After landfall, Ian crossed Florida, headed out over the Atlantic, and finally crashed ashore again, this time in South Carolina. Ultimately, the storm was responsible for an estimated $50 billion to $65 billion in damages. For the United States, it was the second-costliest insured loss on record, after 2005's Hurricane Katrina, according to reinsurer Swiss Re.

A Different Kind of Storm

Bands of blowing snow across a large portion of the U.S. midsection are seen in this image acquired by the GOES-16 satellite on Dec. 22, 2022. (Credit: Satellite Liaison Blog)

The effects of a storm of a very different kind are visible in this image (a screenshot from an animation) acquired by the GOES-16 satellite. Consisting of image data in the visible and infrared portions of the spectrum, it highlights bands of fresh snowfall being blown by strong winds accompanying the brutal Arctic outbreak of late December across a broad swath of the U.S. mid-section. The bands show up as long, gold-colored strands. Within the plumes of blowing snow, visibility was reduced to less than a half mile.

I chose this image over others that zoom in more closely on the bands of snow because, to my eye at least, it looks a bit like abstract art. Call it Earth art, or "eARTh..." To appreciate this even more fully, check out this post at the Satellite Liaison Blog, where you'll find the animation from which I took the screenshot, along with other imagery.

The track of a snowstorm in February of 2022 across the U.S. Midwest is seen in this nighttime image acquired by the NOAA-20 satellite. The track is revealed by a band of snowfall culminating at Lake Michigan. (Credit: CIMSS Satellite Blog)

The after-effects of another winter storm are seen in this NOAA-20 satellite image. It shows a swath of snowfall left by the storm across the midwestern United States.

Although the black and white rendering may not be as immediately captivating as a colorful, art-like, remote-sensing image, for me it's just as dazzling. That's because the satellite was able to see the swath of snow at night, with just the faint illumination of moonlight to reveal its presence — from 22,000 miles away.

Seeing in the night from space is made possible by a special sensor aboard the NOAA-20 satellite called the "Day/Night Band." It's designed to capture relatively faint light from natural and artificial sources, such as city lights, ships, fires, flaring from energy operations, and lightning — as well as features illuminated by moonlight.

In the image, the winter storm track, as revealed by the swath of snow, culminates in the glowing metropolitan area of Chicago along Lake Michigan. Lights from other cities, and roads linking them, also stand out, as do lake-effect clouds over the Great Lakes.

This image was originally published by the CIMSS Satellite Blog, as part of their own 2022 highlights post. Click here to see all of those marvelous images. Over the years, they've graciously let me use many of their satellite images and animations, and I'm very grateful for that.

In the next installment of this two-part series, I'll include another example of dramatic nighttime imagery made possible by the Day/Night Band sensor, along with more "eARTh," and imagery featuring an erupting volcano, wildfire, and evidence of drought in the southwestern United States.