Currency has come a long way since the days our ancestors primarily exchanged goods and services. But where did the idea of money come from? 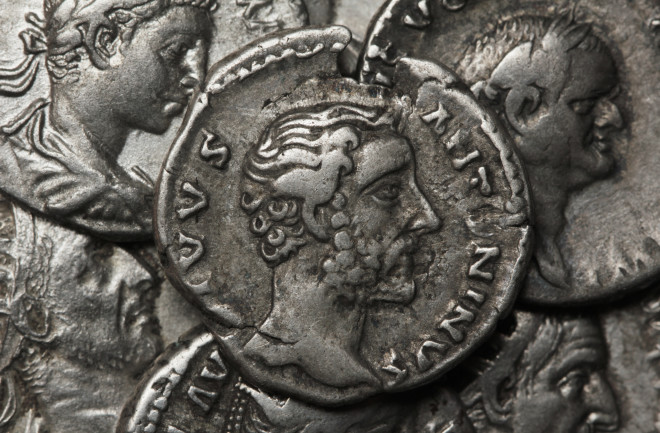 Human transactions have come far since the Stone Age. The commodity trading of our ancestors eventually gave way to money, which in the past few thousand years has cycled through different forms, from wampum beads and metal to paper. In the 21st century, it often manifests as intangible electronic transfers and even cryptocurrencies.

Money is one of humanity’s most momentous inventions. For millennia, it's made the world go round, and that’s no new sentiment: As the Latin writer Publilius Syrus put it in the first century B.C., “Money alone sets all the world in motion.” But what is this shape-shifting source of prosperity, anyway? For Americans, the word calls to mind pennies, nickels, dimes, quarters and dollars. Of course, these constitute the currency of just one nation, at one moment in time. The United Nations recognizes another 179 current world currencies, and hundreds or thousands more have long since gone the way of the shilling.

Besides, money is far more complex than the bills and coins we carry in our purses and wallets. Formal definitions typically note that it serves many purposes: a convenient unit of exchange, a way to store wealth long-term and a standardized measurement of value. This list only scratches the surface of money's uses.

The physicality of money might be its least important property. In fact, most economists agree it doesn’t even need a physical form, especially in the modern age. David Orrell and Roman Chlupatý, in The Evolution of Money, write that “The concept of currency has become increasingly abstract, to the point where actual coins and notes form only a small portion of the money in existence.” That, however, is the end of the story — at least, so far. Let’s turn to the beginning.

The Birth of Money

Most thinkers on the subject, from Aristotle to today’s mainstream economists, have speculated that money emerged from a prehistoric barter economy, in which people traded goods and services directly.

Such a system requires that both parties want what the other has to offer, and that they can settle on the relative value of each item. Do 30 bananas equate to one fishing net? Three nets to an ox? Money, on the other hand, is what everyone wants, and it is the unit by which all else is measured. That means I can sell my bananas to someone else for money, the economical common denominator, and use it to buy your ox.

Money also frees us from lugging around our wealth in all its cumbersome bulk. Imagine wheeling a bushel of barley into the coffee shop to pay for your latte. How many goats might it take to rent a SoHo studio? Certainly more than you can keep in 800 square feet. Ancient societies obviously weren’t this complex, but as they grew, the economist Glyn Davies writes in The History of Money, “the demands of trade exceeded the scope of barter.” Money came to the rescue.

Just about anything can serve as money, so long as it's durable and scarce. Throughout much of Asia and Africa, cowry shells — the spent homes of sea snails small and large — did the job well into modern times. On the Micronesian island of Yap, enormous donut-shaped limestones famously fulfilled the role of currency, despite being immobile. In other cases, the best option was some kind of “commodity money,” like cattle, salt or grain, which has intrinsic value agreed upon by most everyone in a given society.

Lumps of precious metals, like gold and silver, are commodities, too, with the added benefit of malleability. The first uniform metal money dates to China’s Zhou Dynasty, which forged tiny replicas to represent cowry shells, along with knives, spades and other tools. But the first coins we would recognize as such were minted in Lydia, a kingdom in present-day Turkey, during the 7th century B.C. Its last king, with his legendary wealth, lives on in the expression “rich as Croesus.”

Banking and the Gold Standard

Coinage was far easier to transport and value — as opposed to weighing crude bits of metal — and it soon spread throughout the Greek city states and beyond. In the meantime, though, back in China, an even more convenient method was evolving.

Instead of constantly moving coins from place to place, the Chinese government kept the coins all in one place and issued pieces of paper in their stead. This was the start of representative money, in which the money objects themselves are not valuable. From his travels in the East, Marco Polo brought this concept back to Europe, where it gave rise to banking.

First in Italy, and later in England, people began to deposit their bullion with goldsmiths and notaries, which effectively acted as what we now call banks. Those establishments gave receipts for the deposits, and over time the receipts became a currency unto themselves — though they could always be redeemed for actual coins, people just as often circulated the banknotes as payments in their own right.

In this arrangement, the representative paper money is still backed by commodity money in the form of precious materials. Centuries later, gold and silver still remain the most universal symbols of wealth. To this day, the U.S. government stores roughly 5,000 tons of gold at Fort Knox. A few hundred miles east, the Federal Reserve Bank of New York guards the world’s largest depository of gold — 6,190 tons, owned by clients around the world, as of 2019 — in a vault 80 feet beneath the streets of Manhattan.

The Gold Standard dominated international economics for centuries, tying the value of currencies to the value of the rare yellow metal. But in the past hundred years, governments have decoupled the two. The norm now is fiat money, which has no intrinsic value and is not backed by anything that does. You cannot walk to the bank, hand over a stack of hundred-dollar bills, and ask for a troy ounce of gold. These slips of paper are valuable only because the government says they are, and only so long as the citizens have faith in their government.

Wealth on the Web

Even hard currency is getting harder to come by. As Orrell and Chlupatý write, we are now “in a virtual regime, where most money is created at the whim of private banks, simply by entering a number into a computer account.” Today, cash incarnate rarely needs to change hands. For decades, credit cards have allowed bits and bytes to stand in for greenbacks, and in the past few years cryptocurrencies have sparked what may be the next financial revolution.

Bitcoin — the best known in a growing constellation of cryptocurrencies — is an increasingly popular virtual money, created in 2009 by an anonymous person or group known only as Satoshi Nakamoto. Even more abstract than digital dollars, it is simply a series of balances in a decentralized online ledger, known as a blockchain. There are no physical bitcoins.

Using what's called peer-to-peer technology, cryptocurrencies remove middlemen like banks and the government, allowing direct transactions between a vast community of users. Because so many people are independently keeping track of the transactions, it is all but impossible for anyone to cheat. This format removes the problem of trusting millions of people — you need only trust the system.

Economists still debate to what extent cryptocurrencies will change the world, and whether for better or worse. But the digital transformation of currency in general is well underway, with far-reaching implications. Money’s migration into cyberspace means that it is “no longer tethered to the fortunes of one government or a single country,” as the cultural anthropologist Jack Weatherford wrote in 1997. “The newly emerging system will change the very meaning of money.” Perhaps in a century, cash will seem as antiquated as cowry shells.