Found: Dino-Munching Crocodiles Who Swam in the Sahara 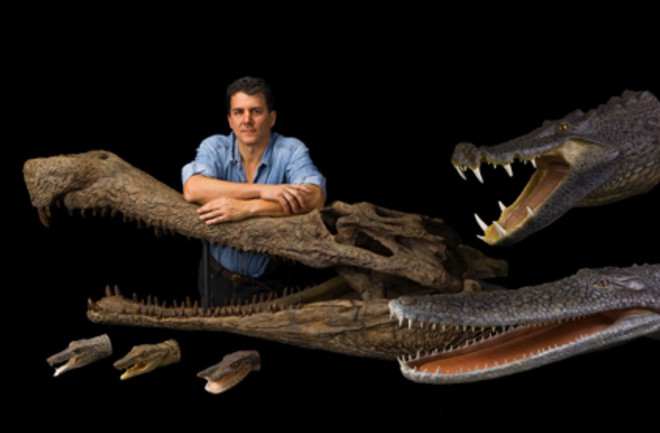 A thrilling set of ancient crocodile fossils have been unearthed in northern Africa. A

"saber-toothed cat in armor" and a pancake-shaped predator are among the strange crocodile cousins whose bones have been found beneath the windswept dunes of the Sahara, archaeologists say [National Geographic News].

At a news conference organized by the National Geographic Society, which sponsored the research, scientists announced that

the fossils represent 5 species; 3 new species and 2 that were previously known. These ancient croc ancestors, known as

crocodilyforms, are unlike any crocodiles encountered in the Northern Hemisphere, according to the research team. Their findings are detailed in the journal ZooKeys. The crocs were spectacularly diverse, and included a species that ate dinosaurs, two that grew up to 20 feet long, and two that had long legs for quick movement on land but also had long tails for swimming. The three new species are: • BoarCroc (Kaprosuchus saharicus), a 20-foot meat-eater. It used its snout for ramming and three sets of dagger-shaped fangs for slicing dinosaurs it ate.• PancakeCroc (Laganosuchus thaumastos): a 20-foot-long, squat fish-eater with a 3-foot long flat head with spike-shaped teeth.

The two previously known species are nicknamed DuckCroc, a three-foot long, long-legged croc that feasted on fish and frogs, and DogCroc, another small and lanky croc that mostly ate plants and grubs.

"These species open a window on a croc world completely foreign to what was living on northern continents," [researcher Paul] Sereno said of the unusual animals that lived 100 million years ago on the southern continent known as Gondwana [AP].

They roamed what is now Morocco and Niger at a time when the landscape was covered with lush plains and broad rivers. The crocs included meat eaters that could have devoured man—

From the fossils, researchers believe that at least some of these crocs were equally at home on land and in the water.

if any humans had existed at the time.

From studying the fossil skulls, the researchers made predictions about the crocs' brain power.

The scientists studied the animals' brains by creating digital and physical casts from CT-scans, 3D X-rays. Both DogCroc and DuckCroc had broad, spade-shaped forebrains that looked different from those of living crocodiles [Telegraph]. Researcher Hans Larsson, who discovered the fossils of

BoarCroc and PancakeCroc, said the brain models suggest these crocs had superior brain power compared to their modern ancestors, possibly because chasing after your meals on land requires more energy than milling around in the water waiting for your food to arrive.

Serano, the team leader, has a penchant for discovering the ancient crocs. He discovered SuperCroc

—the largest of them all—

nine years ago in the same region. His latest findings are the subject of "When

Crocs Ate Dinosaurs," which airs on the evening of Saturday, November 21, on the National Geographic Channel. Related Content: 80beats: Miniature T. Rex Was a Man-Sized Monster 80beats: Baby Crocs Call Mom From Inside Their Eggs 80beats: T. Rex May Have Been a Hot-Blooded, Sweaty BeastImage: Mike Hettwer, courtesy National Geographic