Fossil Shark Teeth Found With Sue The T. Rex Are Clues To Ecosystem 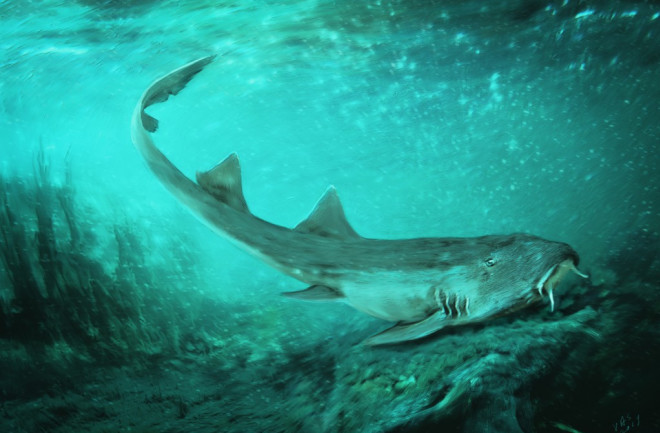 Tiny fossil shark teeth trapped in the matrix — that’s the matrix of rock and other material that once encased the world’s most famous T. rex — represent a new species. The find is helping researchers recreate a Cretaceous environment that might not be what you’d expect.

Sue the T. rex has called The Field Museum in Chicago home for nearly 20 years, and the iconic fossil is a huge draw for tourists and paleontologists alike. With more than 90 percent of it recovered, it’s the most complete T. rex skeleton known, and the largest. Sue holds a wealth of scientific value, but the fossil’s significance goes beyond the bones themselves.

Sue the T. rex, pride of Chicago's Field Museum, was relocated in 2018 to a better show off the animal's impressive 40-foot-plus length. (Credit: The Field Museum)

Sue the T. rex, pride of Chicago’s Field Museum, was relocated in 2018 to a better show off the animal’s impressive 40-foot-plus length. (Credit: The Field Museum)

Prepping the specimen for display required thousands of hours of careful work separating the dinosaur from about two tons of surrounding sedimentary rock, known as matrix. And in that rock were other fossils, perhaps not as impressive as Sue but important for understanding the stomping grounds of the massive predator roughly 66 million years ago.

Field Museum volunteer Karen Nordquist, patiently picking through matrix leftover from preparing Sue, found more than two dozen tiny fossil shark teeth, each about as wide as the head of a pin. Paleontologists identified the teensy teeth as belonging to a new species, Galagadon nordquisti. In addition to honoring Nordquist, the name is a nod to the old school arcade game Galaga, which featured spaceships with a shape similar to the shark teeth.

Because shark skeletons are made of cartilage, nothing of the animal remained other than its teeth. By their size, however, the team was able to determine that Galagadon would have been about two feet long — a mere fun-size snack for Sue, if the carnivorous dinosaur had ever developed a hankering for fish.

Requiem For A Tooth

In addition to new shark Galagadon, the matrix surrounding Sue also yielded fossils of other, previously known sharks, plus a single tooth from an undetermined species of requiem shark.

What’s exciting about that tooth is that it’s the first solid evidence of requiem sharks going all the way back to the Cretaceous Period. The requiem sharks are one of the largest shark families and today include bull sharks, tiger sharks and lemon sharks (plus about 50 other species), though the timing of their origin has long been debated.

All of these sharks would have been swimming in a river where Sue may have stopped for a drink. Finding such a diverse collection of the fish suggests that the animals occupied more diverse ecosystems than they do today: Only a handful of modern sharks spend time in freshwater environments.

During the Late Cretaceous, much of the middle of North America — including the part of South Dakota where Sue and Galagadon were found — was intermittently flooded with an interior seaway. The water would have provided a rich environment for sharks and related species.

The research appears today in the Journal of Paleontology.