For This Goose Couple, Love Knows No Boundaries

Geese are famously loyal and mate for life. Could a life-threatening injury put that partnership at risk? 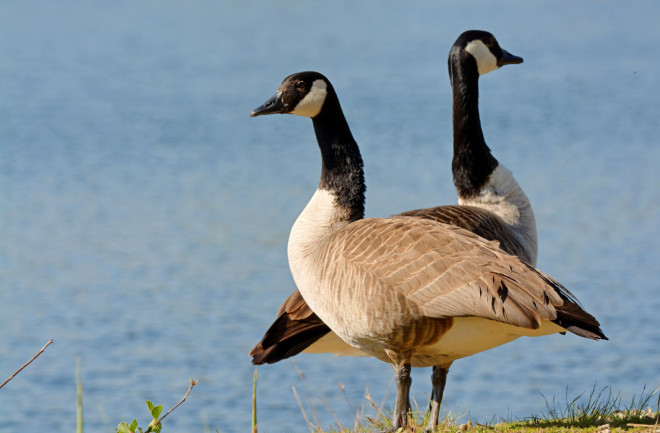 Arnold and Amelia lived near the Birdsey Cape Wildlife Center in Barnstable, Massachusetts. The employees at the center often noticed them walking together near a pond, though they kept their distance and rarely interacted with others. It’s the typical picture of a young couple in love, right? Except in this case, Arnold and Amelia are wild Canada geese — not twenty-something humans.

It’s not uncommon. An estimated 90 percent of all bird species form pair bonds, often leading to the co-parenting of offspring and sometimes lifelong partnerships. On top of this, geese are social animals that travel together and even enjoy higher social rankings than their fellows after finding “the one.”

But for Arnold and Amelia, this past summer tested the strength of that partnership. “We were sitting at a large table and across the lawn we noticed that one of the geese [Arnold] was limping pretty significantly,” says Zak Mertz, executive director of the Birdsey Cape Wildlife Center. After examining Arnold, he discovered the goose had an open fracture. The injury wouldn’t heal on its own in the wild and, if left untreated, would likely spell out Arnold’s eventual demise.

In Sickness and in Health

Greg Mertz, a veterinarian and chairman at the New England Wildlife Center, explains that this is a common injury for Canada geese. “Snapping turtles come up from below and grab the goose by the foot. If it's a baby, the baby will often succumb, but an adult can probably struggle enough to get away,” he says.

While observing the surgery to repair Arnold’s foot, Zak Mertz heard a tapping sound on the clinic’s sliding glass door. When he went to investigate the source of the sound, he found none other than Amelia, taking advantage of a clear view of the table where Arnold was anesthetized.

“She was angrily pecking at the glass, and it was obviously Arnold’s mate. She could tell that we were messing with Arnold, and she wasn't happy about it,” says Zak Mertz, adding that they still don’t know how Amelia found Arnold. “It's a big facility, about six acres with lots of buildings. I don't know how she knew exactly where he was but it’s possible that he was being really noisy in the morning.”

After Arnold awoke from surgery, the staff allowed Amelia into the room. She immediately began preening him when she saw him, using her beak to straighten and clean his feathers. The activity can also be a form of communication between bird mates.

For the next 14 days, Arnold recuperated from his surgery at the wildlife center. During this time, every day, Amelia was there — sharing his meals and spending time with him. Sometimes she waddled down to the pond, but she always returned. And when Arnold was well enough, he was allowed outside too. “We'd open the playpen door and Amelia would come in and they'd hang out. That's pretty much how it went for the remainder, she didn't lose interest,” says Zak Mertz.

After Arnold was released, the staff continued to spot the pair together for about two weeks. Then a flock of geese landed in the pond and since that time, no one has seen Arnold or Amelia. “My guess would be that they took up with the flock and moved on,” says Zak Mertz.

Greg Mertz explains that because the couple didn’t have any babies, they were most likely young. “If a Canada goose goes for some time, without having contact or repaid interest by the other mate, then they will separate as a mated pair,” he says. “It’s a little dramatic but about 10 percent of geese end up getting divorced.” Indeed, a recent study found that the most common reason geese get “divorced” is a low number of hatchlings.

But surely Amelia visiting Arnold while he was injured cemented their bond — does this mean they were in love? “Part of the reason we take such a vested interest in animals is because we draw similarities between their behaviors and our behaviors,” says Zak Mertz. “A lot of the same tenets apply, meaning they protect each other, they reproduce together, they depend on each other, but whether there's an intrinsic sense of love, I don't know.”

Greg Mertz adds that there’s biological influences that keep a goose couple together, something that humans experience as well. “There has to be some internal motivating force that allows that animal to behave in a particular way and we call it love — that internal driving force.”

Although Arnold and Amelia haven’t been seen around the pond in a while, the wildlife center’s staff is keeping an eye out for the lovers. “Arnold has a distinct injury, so if he does show back up then we will know,” says Zak Mertz.