Do Animals Fall in Love?

We know animals mate, form emotional bonds and co-parent. But determining whether they feel intangible emotions is much more difficult. 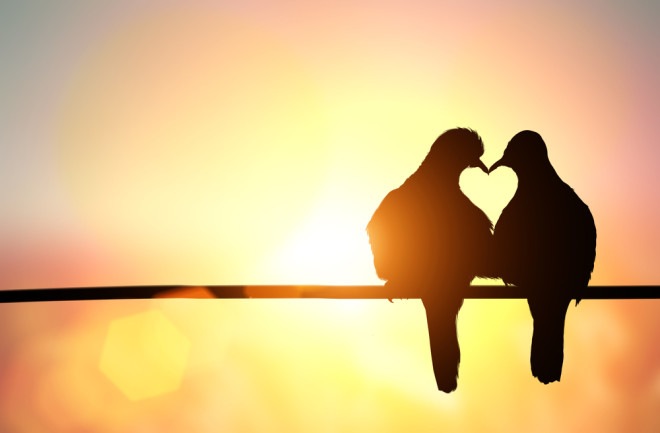 If love is life’s greatest mystery, then perhaps its second-greatest mystery is whether humans are alone in experiencing it. We talk about lovebirds and puppy love, but biologists are cautioned against anthropomorphizing their animal subjects and assigning human traits and meaning where they don’t belong. Instead, scientists scan brains, measure hormone production and conduct “speed dating for pandas,” all of which could help answer the question, “Do animals fall in love?” And if so, how, and why?

Understanding love in animals requires a solid grounding in how scientists define and measure love in humans. “There are different theories about how to slice up the pie for this thing that we call love,” says Bianca Acevedo, a psychologist at the University of California, Santa Barbara. “One widely accepted perspective is that you can slice it up in terms of passionate/romantic love, and then companionate love” – the way we feel about a sibling, child, parent, or friend. Romantic love, on the other hand, “is the intense desire for union with a specific other person. And not just physical union, but emotional union, cognitive union,” she explains.

The animal kingdom is full of examples of close bonds. Our pets sure seem to love us. Elephants appear to mourn their dead. These examples make a case for animals having emotional attachments, not unlike companionate love in humans. But there are also examples that seem like romantic love. For instance, albatrosses keep coming back to the same partner for their whole lives, sometimes over 60 years. “The whole year they are flying over the oceans, and then once a year, they come to an island and see each other and greet each other, and there are rituals [that] really look like love,” says Claudia Vinke, an animal behavior biologist at Utrecht University in the Netherlands. “If you see those rituals, then you must say, ’There must be more than only an attachment bond.’”

Monogamy has been observed in all kinds of animals, from birds to beetles. (Some species are sexually monogamous, never mating with another individual besides their partner, while others are socially monogamous, meaning they can have some fun on the side, but in terms of attachment behavior, they just have one ride-or-die.) There’s not a perfect pattern to which species will be monogamous and which won’t, but it’s typically related to the way those species reproduce. For instance, if an animal’s babies need a lot of care, it’s beneficial for both parents to help out – think of helpless baby birds who require round-the-clock feeding, which both the male and female parent can provide. The benefits of co-parenting may have led these species to evolve monogamous mating systems.

In other cases, the path to monogamy is a little more convoluted.

“The typical mammal system is, a male will mate with multiple females,” says Alexander Ophir, a behavioral neuroscientist and professor of psychology at Cornell University. But some female mammals, like big cats, can have multiple fathers for the same litter of cubs. “The response to that from a male point of view is, ‘OK, well, I’m going to stick with this one female and keep all the other guys away,’” he says. At that point, the males might as well help care for the offspring and pick a mate that they “don’t hate being around.” Voilà, a potential evolutionary pathway for mammalian love.

Ophir notes that this “falling in love” behavior is fairly uncommon in mammals: “We humans are one of these weirdo mammals that do have this experience. We are socially monogamous depending on your culture.”

Love’s intangibility makes it challenging to study in humans, let alone in animals. At least with people, psychologists can give their subjects a questionnaire rating the intensity of their feelings. But in addition to self-reported attachment, researchers like Acevedo can analyze the brain activity associated with love. Using functional magnetic resonance imaging, scientists can measure blood flow within the brain when people look at pictures of their partner or think of experiences they’ve had with them. When thinking about their partner, there’s a flurry of activity in the amygdala, the brain’s emotional center, as well as in areas associated with memory and intense focus.

There are also chemical signs of love, like increased production of certain hormones. Oxytocin has been called the “love hormone,” but that’s not quite right, according to Ophir. “Things like oxytocin and vasopressin are working to modulate a lot of the reward circuitry, the things that make you feel good,” he explains. When something “good” happens to you, like finding $5 on the street, eating sugar or having sex, your brain rewards that behavior by making you feel good, too. This chemical prodding can condition our behavior. It’s hypothesized that this conditioning leads us to conclude that “not only does it feel good to mate, it feels good to mate specifically with this individual,” Ophir explains. “That’s a very sterile way of looking at love, but that could be an underlying part of it.”

Scientists observe similar physiological reactions in animals, but we can’t know for sure that they correlate with feelings of love. But, Vinke notes, the same is true for our ability to prove the depth of emotion experienced by our fellow humans: “I can ask you, but I cannot prove if we feel the same.”

While it’s sweet to think about animals falling in love (just ask the authors of best-selling children’s book And Tango Makes Three, the true story of two male penguin partners who raised a chick together), learning how animals form attachments to their mates can be critically important for scientists working to preserve endangered species.

When creating breeding programs for endangered animals, scientists “need to figure out how to make them fall in love, and it’s not as easy as turning on Marvin Gaye,” says Meghan Martin, an adjunct biology professor at Washington State University-Vancouver and director of the nonprofit PDX Wildlife. “We have to break their specific code.”

Martin’s work focuses on giant panda reproduction; she describes her research as “speed-dating for pandas.” In the experimental set-up, Martin and her team create a “lover’s lane” where a female panda walks down a hallway of potential mates. The scientists record positive and negative behaviors, and these behaviors can inform which pandas are selected to mate with each other.

“The general assumption is that if given the chance to breed with the last panda on Earth, which is theoretically what’s happening, that all animals would do that,” says Martin. “But that is not the case. I have seen species go almost into extinction in the conservation breeding world” because the researchers tried to pair uninterested animals together.

Taking mate choice and attachment into consideration is increasingly important “as animals become more and more threatened and we’re having to make these insurance populations,” says Martin. “Love isn’t that simple for us, so we can’t rely on it being that simple for animals.”