For polar bears, the price of rapid evolution is a weaker skull 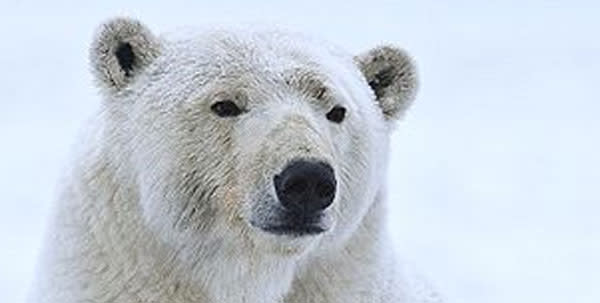 Polar bears have become a poster child for the impacts of climate change on wildlife. Their future may be bleak but their past is altogether more glorious. Polar bears are an evolutionary success story. They’re a recent addition to life’s repertoire, splitting off from their closest relatives – the brown bears – as recently as 150,000 years ago. Within just 20,000 years, they accumulated many adaptations that have made them the masters of their icy realm. But some of these same adaptations could now be their undoing. The polar bear is the only bear that eats nothing but meat. It is wonderfully adapted to live off the flesh of seals. Graham Slater from the University of California Los Angeles has found that the shape of the polar bear’s skull has evolved at around twice the rate of the bear family as a whole. It’s flatter and more slender than those of other bears, all the better for thrusting into the dens and breathing holes of seals. Their eyes sit high up on their skulls, as is often the case for animals that spend a lot of time swimming. But this rapid change has come at a cost for this specialist seal-killing skull turns out to be surprisingly weak. Slater used a technique called finite element analysis to put the skulls of a polar bear and a brown bear through a ‘digital crash-test’. He used a medical scanner to create virtual models of real skulls and then subjected them to different forces in his computer. The resulting images are a riot of colour. Parts of the skull that experience high levels of stress light up with a vibrant red, while cooler blues indicate areas that are more structurally sound. Engineers commonly use this method to look for weaknesses in structures and vehicles when they’re put under stress; Slater wanted to do the same for bear skulls.

The simulations showed that both bears have the same amount of bone in their skulls, and both can bite with similar strength (with the polar bear having a slight edge). However, the polar bear’s skull is structurally weaker. On every bite, the virtual skull bent to a greater extent than that of the brown bear, and it lit up with more extensive red and white areas. The polar molars, in particular, suffer up to 5 times as much stress as those of a brown bear. Slater warns that he hasn’t confirmed these results in real bears, but for the moment, his models show that the evolutionary path of the polar bear has ended in a skull that’s weaker and less efficient than that of its brown cousins. That’s a bit surprising, given that among other carnivores, those that exclusively eat meat tend to have stronger skulls. But unlike these other hunters, the polar bear kills prey that are much smaller than itself – seals, and typically young ones at that. To kill a 100-200kg seal pup, a 500kg bear hardly needs a specially reinforced skull, not like a wolf or lion that goes after much larger quarry. A polar bear’s teeth are also unusual, and again, their diet is to blame. Their menu consists almost entirely of blubbery flesh, which doesn’t need much done to it before it is swallowed. Other bears with more varied diets have to chew through tough plant matter; polar bears don’t, so their molars are smaller. Other carnivores need to shear flesh from bone, so they have specialised blade-like teeth for the job; polar bears don’t, so they lack these well-developed secateurs. None of this is a problem for the polar bear. It has evolved the right combination of features it needs to thrive among the Arctic ice, making use of some of the most nourishing food around. It has adapted to a particular diet, while becoming less suited to eating other, tougher foods. It has evolved from a generalist into a specialist. And like all specialists, it is vulnerable. As the world warms and the Arctic ice starts to disappear, the polar bear’s realm has started to become more temperate. That reduces the number of suitable sites for building dens or foraging for seals. If that wasn’t difficult enough, brown bears from the south are already encroaching into polar bear territory. With stronger skulls and teeth better suited to a varied diet, Slater thinks that these invaders will present a significant challenge to the polar bears. He writes: “As a consequence of exceptional rapid specialization to a high arctic diet of seal flesh, the polar bear appears to have lost the generalized feeding abilities of its close relative. As a result, if current climate trends continue, one of the most striking examples of rapid... evolution may be lost as quickly as it appeared.” Reference: PLoS ONE http://dx.doi.org/10.1371/journal.pone.0013870Image: Polar bear head by Alan WilsonMore on finite element analysis: