Thanks to Hollywood, the jaws of the great white shark may be the most famous in the animal kingdom. But despite its presence in film posters, the great white's toothy mouth has received very little experimental attention. Now, Stephen Wroe from the University of New South Wales has put the great white's skull through a digital crash-test, to work out just how powerful its bite was. 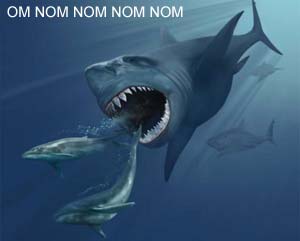 A medium-sized great white, 2.5m in length and weighing in at 240kg, could bite with a force of 0.3 tonnes. But the largest individuals can exert a massive 1.8 tonnes with their jaws, giving them one of the most powerful bites of any living animal. The jaws exert over three times more force than the 560kg exerted by a large lion, and 20 times more than the 80kg a feeble human jawbone can manage. Impressive as the great white shark is, one of its extinct ancestors was even more so. Megalodon (aka the megatooth shark aka Carcharadon megalodon), was a monster that may have grown to 16 metres in length and had a maximum weight of anywhere from 50 to 100 tonnes. And according to Wroe's research, it had the most powerful bite of any animal. A single chomp could exert up to 18 tonnes of force; even the mighty Tyrannosaurus rex could only muster 3 tonnes of force. Being bitten by a megalodon would be like having three African elephants pressing on top of you with carving knives strapped to their feet. It truly was "one of the most powerful predators in history". If anything, these figures are underestimates. Wroe only modelled what would happen if the sharks raise their lower jaw, whereas an actual bite consists of lots of different movements - for example, a great white's upper jaw pushes forward when it chomps and its head presses downward. Nor do great whites bite in an elegant, genteel way. They frequently ram their prey (see the video below), driving their jaws towards them at high speed. And once bitten, the victim is shaken from side to side. So it's likely that an animal being bitten by these predators would experience forces far larger than the already considerable ones measured in Wroe's study.

Bite me The sharks' power is all the more remarkable because they work with flimsier material than a lion or a dinosaur. Shark skeletons are made of cartilage rather than bone, a material that's much more pliant and easily deformed. Even with this disadvantage, the great white and its extinct cousin had no problems in biting hard. Their size is certainly a factor in the strength of their jaws - pound for pound, a lion's bite is actually twice as powerful. Wroe believes that the teeth and the killing style of white sharks have more in common with one o the lion's extinct relatives, the sabre-tooths. I've written about Wroe's paper on sabre-toothed cats before, where he used the same methods to show that these tabbies had surprisingly weak bites. Their overgrown canines were not swords or grappling hooks, but daggers - precision weapons evolved to deliver massive injuries with a single bite. Great whites do something similar, and biologists have reported that sharks sometimes ambush sea-lions with lethal bites and wait for their victims to bleed out. Megalodon probably used a similar technique, although it went after much larger prey - whales. Several bones from fossil whales are studded with tooth marks that match the giant gnashers of megalodon. The wounds tend to be concentrated around the flipper bones and the tail vertebrae, suggesting that the giant shark hunted by first crippling its prey. Wroe describes the great white as an "experimentally intractable" animal, which is a nice way of saying that it's very difficult to run tests on live sharks because of the imminent risk of toothy death. Instead, his team scanned the skull of a great white to create a virtual model that they could analyse in safer conditions. They used a technique called "finite element analysis", that engineers commonly employ to test the mechanical properties of man-made objects; it's used, for example, to see how cars crumple during crash-tests. 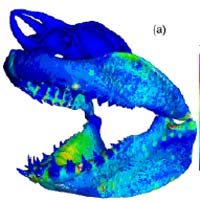 Wroe's group have taken this technique away from the world of metal and plastics and applied it to the behaviour of bone and cartilage. The models are incredibly realistic; they account for the different materials that make up the skull, the points that muscles connect with bone and the ways that the bones themselves fit together. They have built an impressive portfolio of research around the use of finite element analysis to examine the skulls of some of the planet's most awesome predators, and the great white is the latest addition to their list. Reference: Journal of Zoology 10.1111/j.1469-7998-2008.00494.x Images: Virtual shark by Stephen Wroe; white shark by Terry Goss; Megalodon painting by Karen Carr and butchered into a MegaLOLdon by me And for good measure, some stunning slow-motion video of the great white shark at work, from Planet Earth: