For the longest time, people believed that the world's largest lizard, the Komodo dragon, killed its prey with a dirty mouth. Strands of rotting flesh trapped in its teeth harbour thriving colonies of bacteria and when the dragon bites an animal, these microbes flood into the wound and eventually cause blood poisoning. 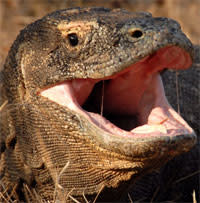 But that theory was contested in 2005 when Bryan Fry from the University of Melbourne discovered that a close relative, the lace monitor, has venom glands in its mouth. The discovery made Fry suspect that Komodo dragons also poison their prey and he has just confirmed that in a whirlwind of a paper, which details the dragon's "sophisticated combined-arsenal killing apparatus".

By putting a virtual dragon skull through a digital crash-test, Fry showed that its bite is relatively weak for a predator of its size - instead it's adapted to resist strong pulling forces. This is a hunter built to inflict massive wounds through a "grip and rip" style that involves biting lightly but tearing ferociously.

The wounds provide a large open area for the dragon to inject its venom and Fry unquestionably showed that the dragons poison their prey. By placing the head of a terminally ill dragon in an MRI scanner, he managed to isolate the venom glands, which turn out to be more structurally complex than those of any other snake or lizard. He even managed to analyse a sample of venom, which is loaded with toxins that prevent blood from clotting and induce shock.

And as the icing on the cake, Fry concluded that Varanus prisca, a extinct close relative of the Komodo dragon probably also had venom glands. Also known as Megalania, V.prisca was three times the size of the Komodo dragon, making it (to our knowledge) the largest venomous animal to have ever lived. 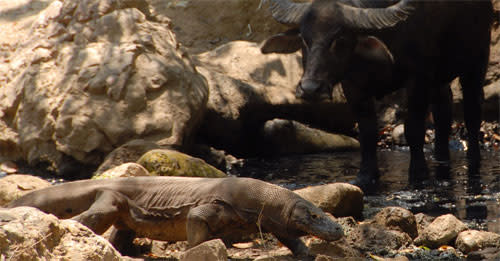 Fry used a CT scanner to create a three-dimensional model of a Komodo dragon's skull and he assessed its properties with a technique called finite element analysis. Engineers use the method to crash-test cars; Fry used it to compare the dragon's skull to that of another giant reptile - the saltwater crocodile. Of the two, the dragon had a much weaker bite, exerting just 39N of force with its jaws compared to the 252N chomp of the croc. If a dragon bit with that much strength, its skull would fracture.

The dragon's skull wasn't much better at coping with twisting or shaking movements either - this is not an animal that can bite and hold onto a prey animal for long. However, Fry found that its skull is highly resistant to pulling forces, and that's the key to its method of attack. Biologists watching these animals have noted that when they bite, they often yank their heads back with powerful neck muscles. Their skulls take the brunt and their sharp, serrated teeth open considerable wounds in their prey.

Other studies using finite element analysis have found that other famous predators, like sabre-toothed cats and great white sharks, do similar things. For their size, they have relatively weak bites but they made up for it with strong neck muscles and very sharp teeth. In all cases, prey start losing blood, but those bitten by the Komodo dragon suffer from another weapon - venom.

Fry used a medical MRI scanner to analyse the preserved head of a dead Komodo dragon and found that it has two long venom glands, running down the length of its jaw. They are the most structurally complex venom glands of any reptile. Each consists of six compartments, with ducts leading from each one to openings between the teeth. Other venomous lizards, like the Gila monster, channel venom down grooves that run the length of their teeth but the Komodo dragon doesn't have these - it just drips venom straight into the wounds that it inflicts. 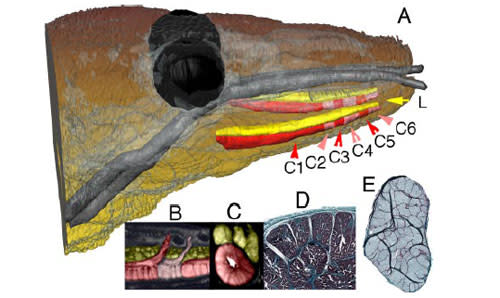 The venom itself consists of over 600 toxins, a chemical arsenal that rivals those of many snakes. Many of these poisons are familiar and they greatly exacerbate the blood loss caused by the dragon's bite. They cause internal haemorrhaging from leaky blood vessels, prevent blood from clotting and cause muscle contractions and paralysis. Fry calculated that a typical adult dragon would need only 4mg of venom proteins to send a 40kg deer into toxic shock from collapsing blood pressure. A full venom gland packs at least eight times this amount.

If the dragon has venom, you can be sure that it uses it. Venom is so costly to produce that the moment it becomes obsolete, natural selection rapidly does away with it. That's happened in other reptiles - members of venomous families that have developed other ways of feeding (like constriction, or egg-eating) quickly lost their venom system. The glands atrophied, the fangs became smaller and the genes that produce toxic proteins built up debilitating mutations. The Komodo dragon, on the other hand, has strong glands that are loaded with poison.

These results don't discredit the salivary bacteria idea, but Fry has little time for it. For a start, he says that since the dragon was first 'discovered' by Western scientists in 1912, no one has actually documented a case of a dragon victim falling foul of blood poisoning. While dangerous bacteria have been isolated from the mouths of Komodo dragons, no single species has been consistently identified in all individuals. This variability makes it very unlikely that dragons could rely on the presence of toxic bacteria as a reliably strategy to hinge their evolutionary success upon.

One study suggested that the bacterium, Pasteurella multocida, accounted for much of the saliva's killing power, but the researchers didn't find this lethal bug in all the dragons they looked at. P.multocida is rare in reptiles but common in mammals, especially those that are sick or old - exactly the demographic that dragons prefer to kill. As such, Fry believes that the bacteria isolated from the mouths of dragons actually came from the animals they fed on. To him, Komodo dragon victims die not from bacterial sepsis, but from heavy, bleeding wounds that are exacerbated by the toxic effects of the giant lizard's venom.

The dragon's extinct and even bigger relative, V.prisca or Megalania, may have done the same. This giant lizard also had a strong skull but relatively slender jawbones. It was very closely related to the Komodo dragon and the lace monitor, both of which are venomous. And Fry has previously shown that the capacity to produce venom evolved once in the common ancestor of snakes and lizard groups like the iguanas and monitors. There's every reason to think that V.prisca used venom too, which would make it the largest venomous animal to have ever lived.

For more venomous animals, and some truly amazing stories, be sure to check out Bryan Fry's blog Sex, Drugs and Rockin' Venom: Confessions of an Extreme Scientist.

More on komodo dragons and other lizards:

Planet EarthSystemic Racism Affects Wildlife, Too: A Q&A With an Urban Ecologist