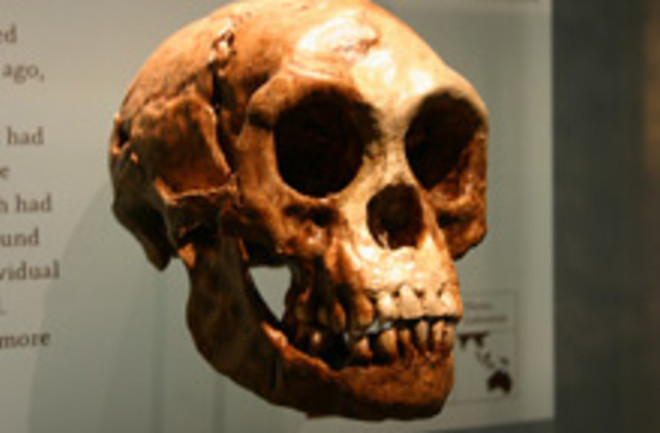 The latest evidence that the ancient Indonesian "hobbit" was a distinct species of hominid, and not just a deformed pygmy, comes from the soles of its feet. Ever since researchers discovered the fossils of a three-foot-tall hominid with a chimpanzee-sized brain on the Indonesian island of Flores, debate has raged over how to interpret the bones. Now, a new study supports the theory that the hobbit,

Homo floresiensis, was a species that

split from our human lineage early in evolutionary history, and developed its strange shape in the isolation of the island. Other experts agree that evidence is accumulating that

was, in fact, a bona fide species. In the new study, published in Nature, researchers found that the hobbit's foot was surprisingly long in relation to the body, and that it had other ape-like features.

The navicular bone, which helps form the arch in the modern foot, was especially primitive, more akin to one in great apes. Without a strong arch — that is, flat-footed — the hominid would have lacked the springlike action needed for efficient running. It could walk, but not run like humans. Weighing the new evidence, the research team led by William L. Jungers ... concluded that “the foot of H. floresiensis exhibits a broad array of primitive features that are not seen in modern humans of any body size” [The New York Times].

The research team has

raised the possibility that the ancestor of the species was not Homo erectus, as had been the original assumption. Homo erectus is known as the earliest hominid to leave Africa and make its way across Asia. At a symposium two weeks ago, several scientists edged towards the view that the so-called hobbits emerged from another, more primitive hominid ancestor [The Guardian].

Hobbit researchers suggest that a band of hominids from an earlier species, possibly

may have arrived in Asia as early as 1.8 million years ago. Those that settled on Flores continued to evolve in isolation, and may have continued to live on the island as recently as 17,000 years ago. Critics of the H. floresiensis theory have contended that the hobbit's small brain, which was about one-third the size of a modern human's, show that the skeleton found

was that of a human who was suffering from microcephaly — a disorder in which the head is much smaller than normal [Nature News].

But in a second study, also published in Nature, researchers set out to determine whether the small brain could have developed from an early human ancestor as a result of "island dwarfing," in which a species becomes smaller due to limited resources and a small gene pool. The researchers

looked at fossil skulls from several species of long-extinct hippos that evolved into dwarfish form on the island of Madagascar. The brains of the hippos were unexpectedly small, even given the diminution of their bodies. “Our findings … suggest that the process of dwarfism could in principle explain small brain size, a factor relevant to the interpretation of the small-brained hominin found on the island of Flores,” they wrote [Wired].