The Debate Continues: Another Skull Study Supports the "Hobbit" 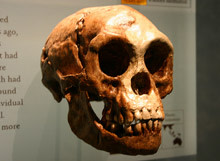 Anthropologists have conducted a new analysis of skulls from the so-called "hobbit" fossils found in an Indonesian cave in 2003, and say their results add more evidence that the fossils come from a hitherto unknown race of tiny people. The researchers compared the hobbit skulls to those of

modern humans and apes, as well as the fossil brain cases of early human ancestors. "The shape of the skull is consistent with what we would expect for a small archaic Homo," said Karen Baab [National Geographic News]

, lead author of the new study. When paleontologists unearthed a cluster of strange, hominid skeletons on the island of Flores, they had little idea that they were about to start a fierce debate that would divide the field of anthropology. But soon the researchers declared that the 18,000-year-old fossils came from people who were only three feet tall, and who were actually a different species of hominid, which researchers called Homo floresiensis.

"These hobbits – hominids - appear to have survived when modern humans were all over the Earth at this time," Baab said [The Guardian].

Since then, debate has raged over whether the hobbits were indeed an unknown species, or whether the individuals found in the cave were just modern humans with a disease that stunted their growth and gave them small brains, a condition called microcephaly. In the new study, which will be published in the Journal of Human Evolution [subscription required], the researchers used X-rays and 3-D modeling techniques to examine the hobbit skulls.

The new research focuses on the asymmetry—or unevenness—between the left and right sides of the hobbit's skull. A paper published in 2006 concluded the skull is highly asymmetrical, consistent with abnormal development—a condition that would invalidate use of the skull to represent a new species. The new study also finds the skull asymmetrical, but within the range of healthy human ancestors. What unevenness exists, Baab said, can at least partially be explained by the process of fossilization [National Geographic News].

However, the new analysis hasn't convinced the skeptics, who still believe that the hobbit contingent has gotten carried away by a romantic idea. Evolutionary biologist Robert Eckhardt, who has also studied the fossils,

says the tiny skull probably means the person was sick and was microcephalic for a medical reason. "We are working very hard to find out what it was," Eckhardt said. "When you search the developmental genetic literature there are about 400 conditions that have microcephaly as a symptom," he said, "so we are tracking down which one it is, and it won't be easy" [The Guardian].