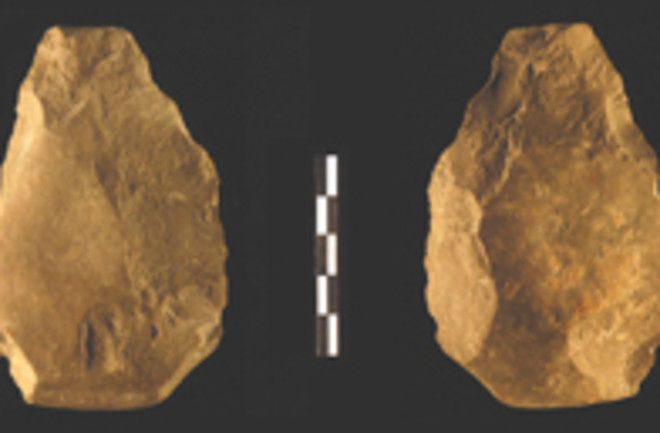 Stone Age Europeans may not have been the last to hear about those nifty gadgets called stone axes, after all. New research at two sites in southern Spain indicates that the people there were fashioning hand axes as early as 900,000 years ago, far earlier than previously believed.

Hand axes have sometimes been called the Swiss Army knives of the Stone Age world. They vary in shape and size, but most are at least roughly symmetrical, with one pointed and one rounded edge. Hand axes were very handy for butchering animals and cutting the stalks of tough plants [ScienceNOW Daily News].

Previously, archaeologists believed that the first Europeans lagged behind people living in Africa, the Middle East, and Asia in their tool-making capabilities. Axes dating back to 1.5 million years ago have been found in Africa, while the earliest axes found in Europe were thought to be no more than 500,000 years old. The new study, published in Nature, suggests that vital information about tool-making traveled relatively quickly through the ancient world. The new time frame was determined through a process called paleomagnetic dating, which

takes advantage of the fact that the Earth’s magnetic field has reversed itself often on geological timescales. By analyzing the polarity of magnetic minerals in rock, scientists can determine when the rock formed.... At each site, the researchers took samples at regular intervals above and below the level where hand axes were found. The last complete magnetic reversal was 780,000 years ago, and both sites dated back to about this time [The New York Times].