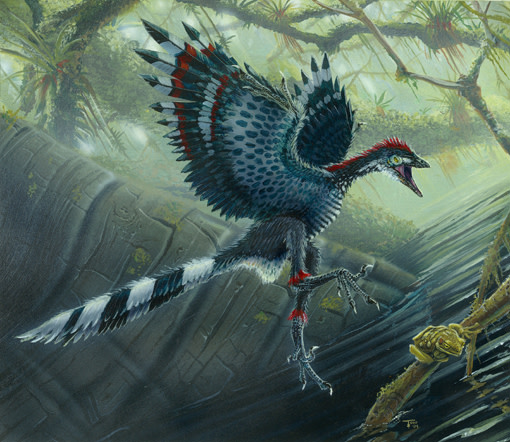 Meet Archaeopteryx, one of the most primitive of all birds. It beautifully illustrates the transition between small predatory dinosaurs and their bird descendants. It has toothed jaws and three clawed fingers on each hand, but it also had broad wings with well-developed flight feathers. Like those of modern birds, these feathers had two asymmetrical vanes coming off a central shaft or ‘rachis’. But despite this striking resemblance, Archaeopteryx’sfeathers differed from those of modern birds in a critical way. Robert Nudds from the University of Manchester and Gareth Dyke from University College Dublin have found that they were thinner and weaker than today’s feathers. If this early bird had tried the same flapping flight that its descendants do so effortlessly, its feathers would have buckled under the stress. It seems that this pioneer among birds wasn’t a very good flier. Since its discovery, palaeontologists have argued about Archaeopteryx’s flying abilities. Sure, the animal had broad wings and sophisticated feathers. Its skull had an inner ear that resembled that of modern birds, suggesting that it had the coordination necessary for flight. It also lacked the bony breastbone that the larger flight muscles of modern birds attach to but those muscles could equally have attached elsewhere. Perhaps more compellingly, its shoulder joint would have prevented it from lifting its wings far enough to carry out a full upstroke. Enter Nudds and Dyke. They studied the feathers of two of the earliest birds – Archaeopteryx, which lived around 145 million years ago in the Late Jurassic, and Confuciusornis, which lived 120 million years ago in the Early Cretaceous. 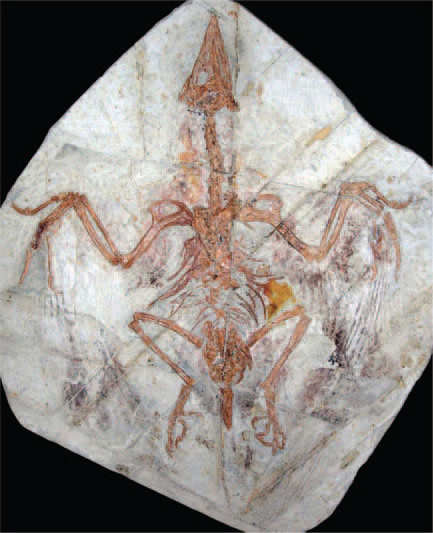 Compared to modern birds of a similar size, both prehistoric animals had primary feathers of the same length, around 20cm for Confuciusornis and 13cm for Archaeopteryx. However, their rachises –the central shaft of the feathers – were unusually narrow for their size. It’s a small difference, but enough to seriously compromise the endurance of the feathers. Bird flight feathers have hollow rachises, and if you take two hollow cylinders with walls of the same thickness, the wider one will withstand larger forces before buckling. So it is with the ancient birds. In fact, it would have taken around ten times less force to buckle Archaeopteryx’s primary feathers than that of a living bird of the same size, and a hundred times less force to cripple Confuciusornis’s plumes. These ancient feathers simply couldn’t have withstood the forces needed to sustain flapping flight, much less perform any manoeuvres. They could only have worked if the feathers had a fundamentally different structure to those of modern birds – if they were solid cylinders without hollow cores. Even then, they would be considerably weaker than today’s feathers. To illustrate their point, Nudds and Dyke calculated “safety factors” for a variety of feathers. This represents the force required to buckle the feather divided by the force needed to keep the bird aloft. Modern birds as diverse as gulls, pigeons and albatrosses had safety factors ranging from 10 to 14. In contrast, Archaeopteryx and Confuciusornis had safety factors of 4 and 3, and those are generous estimates that assume the feathers were solid cylinders. Their conclusion is clear – both primitive birds were more gliders than fliers. They could well have produced some thrust with the odd flap or so, but the “vigorous flapping flight” of modern birds was out of the question. The wing-beats that hold our feathered friends aloft evolved after the first birds did. Reference: Science http://dx.doi.org/10.1126/science.1188895More on feathers and dinosaurs: