The renaissance of technicolour dinosaurs continues (and the gloves come off...) 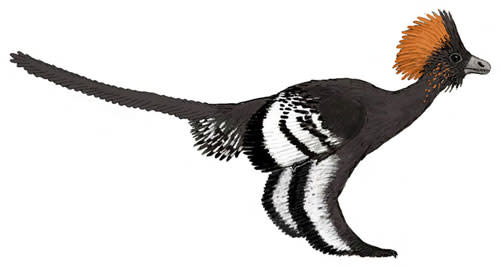 National Geographic should have a 3-D animation up soon

The pursuit of accurate dinosaur colours just turned into a race, and a heated one at that. Just last week, I wrote about a group of scientists who claimed to have accurately identified the colours of some feathered dinosaurs by microscopically analysing three fossils. According to that study, Sinosauropteryx had a tail covered in ginger stripes. Now, another group have revealed the palette of an entire dinosaur, Anchiornis. This tiny predator had a dark grey body and the limbs bore long, white feathers tipped with black spangles. Its head was mostly grey with reddish-orange and black specks, and an extravagant reddish-orange crown.

Both reconstructions are based on microscopic structures called melanosomes. They're partly responsible for the brilliant colours of modern bird feathers, they're packed with pigments, and they happen to fossilise well. There are two major types. Spherical 'phaemelanosomes' contain a reddish-brown or yellow pigment while the rod-like 'eumelanosomes' have black-grey tints.

The technique of inferring colours from fossil melanosomes was pioneered by Jakob Vinther at Yale University. He used it to show that a Cretaceous bird feather probably had black and white stripes and, later, that another fossil feather had an iridescent starling-like sheen. But these were analyses of single papers and even last week's paper coloured Sinosauropteryx by looking at just one part of a single individual.

Vinther isn't impressed with his rivals. "They are in the Stone Age when it comes to understanding melanosome fossilization and interpretation of original colors," he says. To him, it's simply not enough predict colours based on the presence of one type of melanosome. Even the hues of single feathers can depend on a mix of the two melanosome types with different concentrations of pigments. So you need to know the distribution of melanosomes across an animal and even then, you still need to work out how that translates to different colours.

And that's exactly what he's done. When I spoke to Vinther last week, he said, "We are still far from putting colours on dinosaurs [but] the future is promising. Eventually we will have dinosaurs in technicolour. We are working seriously on that currently." He wasn't kidding!

He had been working on a new specimen of Anchiornis with the catchy name of BMNHC PH828. The tail is missing but the rest of the skeleton is beautifully preserved, including the skull and both sets of limbs with their elegant plumes. Rather than looking at individual body parts, Vinther took 29 samples from the specimen, representing every type of feather types across different body parts. In each one, he thoroughly analysed the size, shape, density and distribution of melanosomes.

To interpret this goldmine of data, he worked with his colleague Matt Shawkey to catalogue the melanosomes from a wide variety of living birds, from ravens to finches to mallards. This modern data set was a cross between a paint catalogue and a Rosetta stone. It told Vinther how different combinations of melanosomes led to different colours and allowed him to correctly paint his Anchiornis. 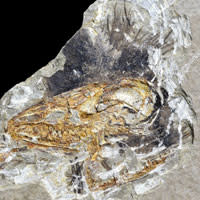 The animal was a tiny hunter just 13 inches in length. Its name, appropriately enough, means "near bird". It was mostly black and grey, for an electron microscope revealed melanosomes in all 29 samples from all over its body.

Like the related Microraptor, Anchiornis had four wings, with long flight feathers on both its arms and legs. These feathers had very few melanosomes at their bases, suggesting that they were white or very lightly pigmented. Reddish-brown phaeomelanosomes only turned up in the dinosaur's crown feathers, and in patches on the side of its skull, interspersed with eumelanosomes. Anchiornis would have looked like it was wearing an orange hat and ginger freckles.

Many of these colours should be familiar to modern bird-lovers. The orange crest recalls the headdresses of quails and tinamous, while the spangled wings are similar to those of domestic chickens. Modern birds used these complex colours to communicate with peers, display to mates or posture to predators. To Vinther, this suggests that the early evolution of feathers was shaped by the desire to talk to others as much as the need to be aerodynamic.

Even this analysis may not paint a completely accurate picture of Anchiornis. As Vinther admits, some pigments like the orange-yellow carotenoids or the greenish-purple porphyrins affect bird colours but haven't been considered. Nonetheless, these pigments are rare, even in modern birds. "I think it is unlikely but of course not impossible that Anchiornis had some of these pigments," says Vinther. "In fact, carotenoids get fossilized, we can recognize them as chemical traces, but we have focused on the shape of melanosomes and not the chemistry."

For the moment, Vinther has plans to produce colour schemes for other dinosaurs, although the competition certainly makes things more difficult. "We did have a hard time getting access to material in China because of the competing group," he says, "but [our collaborators] Li Quanguo and Gao Ke-Qin have more specimens at the Beijing Natural history museum that we will study." 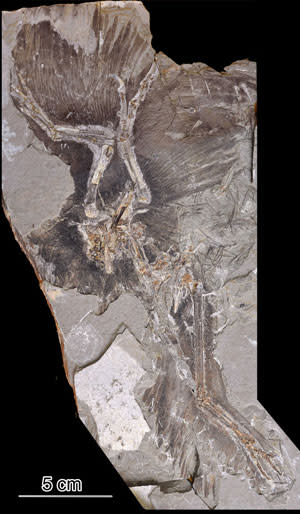 Planet EarthHow T. rex Came to Rule the World
Recommendations From Our Store