Many of us believe dinosaurs to be extinct but in truth, they surround us every day. All the world's birds, from the pigeons of our cities to the gulls of our seasides, are descended from dinosaurs, and modern science now classifies the birds with their long-dead kin. The gulf between dinosaurs and modern birds may seem huge, but the discovery of several feathered dinosaurs are seriously blurring the line between the two. And now, new research on the feathered dinosaur Microraptorreveals that birds may have evolved from dinosaur ancestors that flew not on two wings, but on four.

The link between dinosaur and bird was cemented in the last two decades, when palaeontologists unearthed hundreds of beautifully preserved fossils in the Liaoning province of China. Many of the newcomers were small predators, belonging to the same group as the famous Velociraptor (and indeed, most scientists believe that this Hollywood star was also covered in primitive feathers).

The new species run the full evolutionary gamut from flightless dinosaurs to flying birds. They range from Sinosauropteryxwith its primitive, downy, proto-feathers to

a dinosaur with proper flight-capable feathers, to Confuciusornis, a true bird. Together, these species provide a tantalising snapshot of how small prehistoric predators transformed into the familiar fliers of today's skies.

One of these species, Microraptor, stood out among the rest, for it had winged legs as well as arms. The animal's metatarsal bones were covered in long, asymmetric flight feathers. Their shape is clearly designed to produce lift during flight, but how Microraptor used its four wings has puzzled scientists. The species' discoverers believed that by splaying its legs out sideways from its body, it held its wings in tandem like a dragonfly. But for Sankar Chatterjee and R. Jack Templin of Texas Tech University, the facts didn't add up. 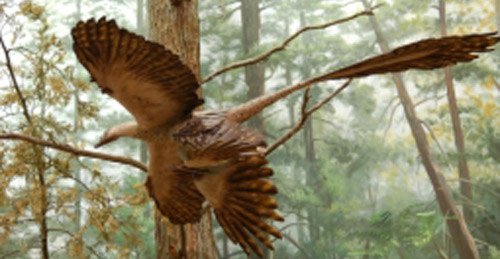 For a start, no bird or dinosaur has shown the ability to splay its legs out sideways and doing so would probably have dislocated the hip. Microraptor must have tucked its legs vertically beneath its body, like modern birds of prey do when they pounce. Its leg flight feathers would only produce lift if the leading edge faced forward, against the flow of air. The leg feathers must therefore have protruded horizontally from the tucked legs. Chatterjee's revised pose makes Microraptor look like a feathered biplane, with the leg wings sitting below and just behind the main pair.

This new posture may also answer a long-standing debate about the origin of flight. Some scientists believe that bird flight evolved when ground-dwelling dinosaurs began to take to the skies. In contrast to this 'ground-up' theory, the 'trees-down' camp believes that tree-dwelling dinosaurs evolved flight to glide from tree to tree.

And this is exactly what Microraptor did. It lacked the muscles for a ground take-off and couldn't get a running start for fear of damaging its leg feathers. But a computer simulation showed that Microraptor could successfully fly between treetops, covering over forty metres in an undulating glide. 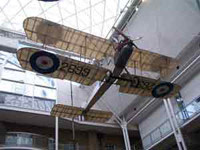 It is unclear if Microraptor could truly fly or was just an exceptional glider. Certainly, its body plan shows many features that would make its avian descendants such great aeronauts. It had a large sternum for attaching powerful flight muscles and strengthened ribs to withstand the heavy pressures of a flight stroke. Its long, feathered tail acted a stabiliser and rudder and its tibia (shin bone) was covered in smaller, backwards-facing feathers. Modern birds of prey carry similar feather 'trousers' and Chatterjee believes that they helped to reduce drag by breaking up turbulent airflow behind the animal's leg.

It could be that Microraptor's biplane design was just a failed evolutionary experiment. But Chatterjee thinks otherwise. He believes that the biplane model was a stepping stone to the two-wing flight of modern birds. As the front pair of wings grew larger and produced more lift, they eventually took over the responsibilities formerly shared with the hind pair. This series of events stunningly mirrors the evolution of man-made aircraft. When the Wright brothers unveiled their new plane in 1903, little did they no that dinosaurs had got there first 125 million years ago.