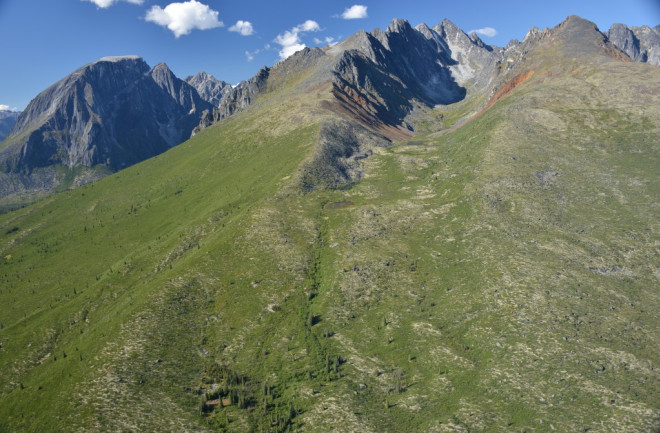 East of the now-submerged land bridge Beriniga, a large valley moraine in northern Canada's Nahanni National Park dates to 13,800 years ago, roughly the end of the last ice age. (Credit Brian Menounos, UNBC) One if by land, two if by sea...if only the debate about how the first humans arrived in the Americas was as easy to sort out as Paul Revere's fabled lantern signal. Maybe it is. A new study from a different field offers indirect support to researchers advocating a coastal route for human migration to the New World. For decades, reconstructions of the earliest human migrations to the Americas had hunter-gatherers crossing from Siberia to what's now Alaska via the land bridge known as Beringia. The event must have occurred when glaciers retreated, toward the end of the last ice age, and opened an overland route. Or so that was the thinking. (Beringia itself was swallowed by rising seas soon after, but genetic studies have confirmed a Siberian connection for First Americans.) While we know where the First Americans came from, we're not sure when, or how, they arrived. For example, a number of archaeological sites have been found, in places from Monte Verde, Chile (up to 18,000 years old) to Florida's panhandle (14,500 years old), that predate the glacial retreat creating an overland route (while there is no firm consensus on when that might have happened, 14,000 years ago or so is a commonly cited estimate). Increasingly, as mentioned in a post last week, researchers seeking to understand the first wave of migration to the Americas have signed on to the kelp highway hypothesis: The First Americans arrived from Siberia by following a coastal route, sustained by the plentiful shellfish, fish, birds and yes, kelp. This route, argue proponents of the kelp highway, would have been open for business a few millennia before an overland route. Ice, Ice Maybe A paper published today in Science bolsters the idea that human foot travel from Beringia to the Americas could not have been the first wave of migration. To be clear, the team behind today's findings was not looking at the question of human migration to the Americas. Instead, their focus was what happened to the Cordilleran Ice Sheet (CIS), which once draped itself over much of western Canada. The CIS during the last ice age was similar in size to Greenland's current ice sheet, and the team was interested in learning what the earlier shrinkage of the CIS might tell us about Greenland's ice in the near future. In sorting out what happened to the CIS, however, the glaciologists discovered how it might have affected potential travel routes for humans moving east from Beringia. Previous estimates had the CIS melting away around 12,500 years ago. By analyzing scores of samples from glacial debris features called moraines, however, today's team discovered that the CIS appears to have thinned and experienced significant decay, or melt, by 14,000 years ago. (As a side note, the study found that the earlier and accelerated CIS melt may have contributed up to about 10 feet of sea level rise between 14,000 and 14,500 years ago.)

Researchers collecting samples from areas such as this terminal moraine (debris dumped by a glacier at its furthest point, or terminus) in British Columbia may have inadvertently provided a clue to how the first human migrations to the Americas occurred. (Credit Brain Menounos, UNBC) A melted CIS does not, however, mean the northwestern reaches of the continent were high and dry. On the contrary, the team found that after the CIS decayed over the region's largely mountainous terrain, new glaciers formed, choking lower elevations in ice anew. It's a Rout(e) So, sorry, fans of Team Overland Beringia, the latest research on how and when a land route for migration may have opened is not what you wanted to hear. Today's study suggests that the interior of British Columbia did not become ice-free until around 11,500 years ago. (Is it possible there was some other route available to hunter-gatherers whose boots were made for walking? Maybe. There's evidence that a corridor between the CIS and its eastern counterpart, the Laurentide ice sheet, was open as early as 13,400 years ago, essentially following the Rockies. But that still doesn't reconcile how a number of sites in the Americas were around a millennia or more before that.)

Approximate positions of the Cordilleran and Laurentide Ice Sheets before the big melt for those who, like me, enjoy maps. (Credit Creative Commons) Aside from the implications that today's study has, indirectly, for a coastal route in early human migration to the Americas, the research is significant because of how it advances what we know about ice sheet decay. The Laurentide Ice Sheet, for example, covered relatively flat ground and melted in a uniform way, creating a bulls-eye pattern of ever smaller ice. Today's research shows that the melting of the CIS, despite being considerably smaller than the Laurentide, was a messy and complex affair because of the mountainous topography beneath it.