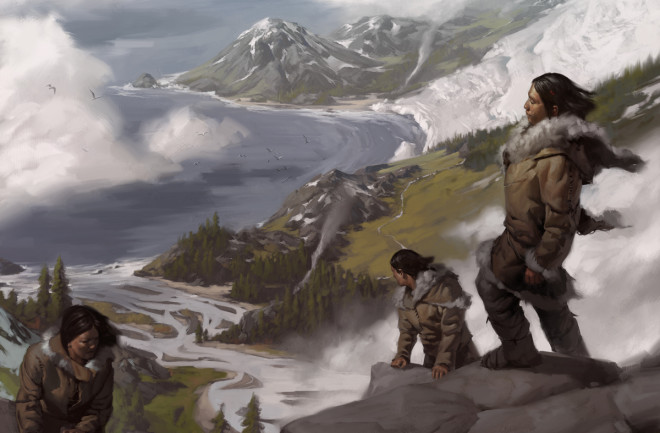 The archaeological evidence left behind by the first people to settle the Americas tells a confusing story. Researchers have long understood that people migrated from Siberia to Alaska across a region called Beringia, which included a now-submerged land bridge — but they disagree whether the artifacts at Siberian sites resemble those on the other side of the Bering Strait. And the few skulls they’ve found of the earliest Americans don’t look much like those of modern Native Americans.

The sparse and sometimes conflicting data raised questions about who the first settlers of the Americas were, when they arrived and whether other waves of migration followed. The lack of evidence inspired some, shall we say, “esoteric” theories of Paleolithic settlers boating over from France or Polynesia. “For a while, everybody could [seem] right,” says Ted Goebel, an archaeologist at Texas A&M University who has worked at sites on both sides of the Bering Strait. Goebel is also co-author of a 2015 study published in Science that brings together genetic and archaeological data to end speculation.

The study, led by Eske Willerslev, an evolutionary geneticist at the University of Copenhagen, compared the genomes of three ancient skeletons — a 24,000-year-old child found in central Siberia, a 12,600-year-old Montana child known as Anzick-1 and a 4,000-year-old Saqqaq Eskimo from Greenland — to the genomes of 31 indigenous people currently living in Asia, North and South America, and the Pacific islands. The results added to a growing body of evidence showing that all modern Native Americans share ancestry with the Anzick child, and that the majority of all indigenous people in the Americas can trace their lineages back to a single migration that took place about 15,000 years ago.

DNA from the 24,000-year-old Mal’ta boy, found in Siberia in the 1920s, provided clues about the origins of the first Americans. (Credit: State Hermitage Museum in St. Petersburg)

The research suggests that the people directly ancestral to Native Americans actually split away from their Siberian cousins as early as 23,000 years ago. This population migrated only as far as Beringia at first, because glaciers blocked the way farther eastward into the Americas. Genetic analysis shows that this Beringian period lasted no longer than 8,000 years before the population pushed into North and, eventually, South America.

That was not the only migration event, however.

“We’re still not entirely sure” how many migrations there were, says Pontus Skoglund, a geneticist at Harvard University. He thinks there were as many as five separate waves and believes there may have been distinct ethnic groups within the population living in Beringia at the time the Americas were first settled, which could confuse the picture. The lead author of a separate 2015 study in Nature, Skoglund looked at the genomes of ancient and modern Native Americans. His team’s research found that a specific Australasian genetic signature — one found in people who lived in Australia, Indonesia and the Andaman Islands, off the coast of Burma — survives today in some of South America’s indigenous people. Skoglund believes this genetic signature is evidence of another, smaller migration that was separate, but possibly concurrent, with the main wave from Beringia.

These studies showing greater genetic diversity in ancient populations suggest it may not be so far-fetched to think that Siberians could have come into contact with people carrying Australasian genes.

On its surface, the presence of Australasian genes might seem to indicate that people had sailed from that area across the Pacific Ocean to the Americas, but that genetic signature does not show up in people in the Pacific islands, which likely would have been along the route. Unlike Skoglund, Willerslev believes that this signature was brought by a group of people who migrated via Beringia, or possibly boated along the coast from Siberia to South America, around 13,000 years ago — a couple of thousand years after the initial, larger migration.

The debate comes down to how each team interprets the genetic data. For now, the ancient Siberian genome also analyzed in the Science study supports the idea of a highly genetically diverse population living in Siberia prior to migration into the Americas. The 24,000-year-old Siberian individual who was sequenced had ancestry in common with people in Europe, which shows that these Paleolithic hunter-gatherers were moving over a larger territory than had been assumed. In October, a separate study of the maternally inherited mitochondrial DNA of the remains of two Alaskan children, dated to 11,500 years ago, revealed that one child had a rare genetic signature found on the southern edge of Siberia. These studies showing greater genetic diversity in ancient populations suggest it may not be so far-fetched to think that Siberians could have come into contact with people carrying Australasian genes, and then taken those signatures to the Americas over subsequent generations.

After sequencing the DNA of 8,500-year-old Kennewick Man, researchers concluded he is related to all modern Native Americans. (Credit: Chip Clark/Smithsonian Institution)

“What we really see is that it was a lot more cosmopolitan back then,” says Maanasa Raghavan, a geneticist at the Natural History Museum of Denmark and part of the team behind the Science study.

Curiously, the subsequent possible migrations that Skoglund references — unrelated to the wave that brought Australasian genetic signatures to our shores — don’t seem to have progressed beyond northern North America. The most recent migration backed by genetic and archaeological evidence, for example, occurred only 700 years ago: The Thule Inuit people spread out from the Bering Strait region across the Arctic, replacing the Paleo-Eskimo people who had lived there for millennia.

The genetic studies provide greater context for archaeological evidence found in the Americas: The research shows that the incredible diversity of cultures and languages among the native people of the Americas developed in place. It was not the result of new groups of people bringing new artifacts or belief systems from outside, as has sometimes been theorized.

The studies also strengthen the case that all of the indigenous people living in the Americas descended from the continents’ first inhabitants, which could resolve a legal limbo for some archaeological artifacts and human remains.

The research shows that the incredible diversity of cultures and languages among the native people of the Americas developed in place. It was not the result of new groups of people bringing new artifacts or belief systems from outside, as has sometimes been theorized.

Consider, for example, the decades-long custody battle over an 8,500-year-old skeleton known as Kennewick Man, found in Washington state. Local Native American tribes have been fighting to rebury the remains as those of a direct ancestor, in accordance with a federal law. But researchers argued they had the right to study the skeleton based on the skull’s features, which differed from those of modern Native Americans — thus suggesting Kennewick Man was not an ancestor. Willerslev’s team, in a separate 2015 study, was able to sequence Kennewick Man’s DNA and confirm he was, in fact, related to all Native Americans. As for the disparity in skull features, a number of factors, including diet and random genetic drift, could account for differences in appearance between modern Native Americans and Kennewick Man. Those same factors may also explain more generally how the skull shapes of indigenous American populations changed over millennia.

The growing number of ancient and modern genomes available for study continues to refine our understanding of how the Americas were settled. Old school fieldwork is also part of the process: Goebel, for example, is looking forward to excavating sites in Alaska that might challenge or augment the migration models created with genetic data. “Some of the stories are being majorly rewritten,” says Raghavan. “We know we’re not done yet; we’ve got a lot more to go.”