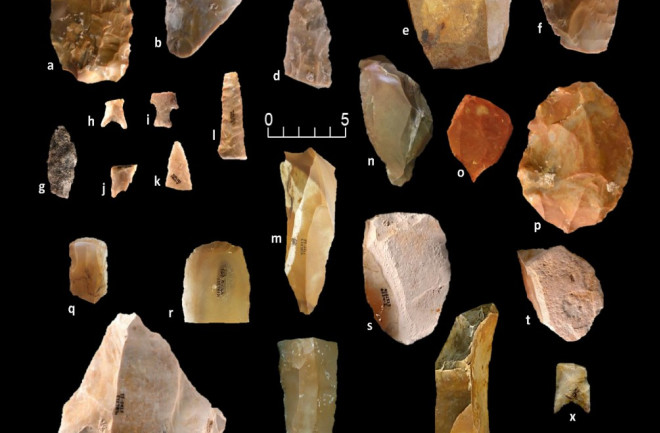 Without human remains older than about 13,000 years, the best evidence for the earliest peopling of the Americas comes from stone tools such as the Gault projectiles, unique in shape, and other artifacts from a site in Texas. They represent previously unknown First Americans that pre-date Clovis, once thought to be the first indigenous culture in the New World. (Credit: Produced by N Velchoff ©The Gault School of Archaeological Research) Amid a growing number of finds that challenge the long-held timeline of the peopling of the Americas, researchers get to the point: Artifacts found at a site in Texas, including projectile points of a previously unknown style, are at least 16,000 years old, pre-dating the conventional arrival date of First Americans. For decades, the Clovis culture loomed large in theories about when the First Americans arrived to the New World. Named for a town in New Mexico where the first artifacts were found in the 1930s, Clovis was long considered the first indigenous culture of the Americas. Thousands of examples of the iconic Clovis point — a thin, usually sharp projectile point with distinct fluting, skillfully formed from various types of rock — have been found throughout North America. Some examples, or similar artifacts, have also turned up in South America. But they're not found anywhere else, leading researchers to believe the Clovis culture arose in the New World, created by some of the first people to settle here. The wide distribution of Clovis points suggested that the culture was widespread, perhaps the result of people radiating out across the continent from a single founding population.

A selection of Clovis Points found in Iowa are among the thousands of projectiles unearthed across most of North America. (Credit: Wikimedia Commons/Bill Whittaker) The oldest securely-dated Clovis artifacts are about 13,500 years old, which coincides with what had been the conventionally held arrival date for the First Americans via the now-submerged land bridge of Beringia. An Early Start Beginning in the 1990s, however, and accelerating in recent years, researchers have unearthed a trove of sites older than 13,500 years and thousands of miles from Beringia, such as a mastodon butchering site in Florida. Additional finds from Alaska to Chile have shown that modern humans were present in the Americas well before Clovis. Late last year, a group of researchers called for the field to accept that the Americas were populated thousands of years earlier than once thought. They called for increased exploration of potential sites — many now submerged — that may offer additional evidence of an earlier arrival date via the Kelp Highway: early people using boats to follow the nutrient-rich Pacific coastline from Asia and into the Americas millennia before glaciers receded enough to expose land corridors. Some researchers go a step further, arguing that the pre-Clovis finds are distinct enough from both Clovis and each other to suggest that people had been living in the Americas long enough to establish their own unique regional identities. That school of thought gets a boost today in the form of stone artifacts, including unique projectile points, from a site in Gault, Texas. The Gault site is not new to science: it has been excavated for decades and has yielded hundreds of thousands of artifacts, particularly of Clovis culture. Located about an hour's drive north of Austin, the Central Texas site is in the Buttermilk Creek Valley and offered year-round resources that would have been valuable to the First Americans, including water and high-quality stone for tool-making. Layers of sedimentary deposits have preserved evidence of occupation by a succession of cultures, but researchers only recently returned to the oldest layer to be studied, known as Area 15. This layer is beneath the deposits that contained Clovis artifacts. Stimulating Results The team behind today's study used optically stimulated luminscence (OSL) to date the Area 15 deposits. One of the relatively newer scientific dating methods, OSL exploits a neat aspect of buried sediments and some other types of rocks: Once covered and no longer exposed to sunlight, quartz crystals in the material accumulate a luminescence signal. Researchers sample the material and are then able to measure the signal in the lab, giving them an accurate estimate of when it was buried. The researchers determined that the Area 15 layer is at least 16,000 years old, and may be as old as 20,000 years. The team concluded that the Gault site was most likely inhabited at least 17,000-18,000 years ago. The new dates confirm that the layer is not just pre-Clovis but significantly so, by a few thousand years. In addition, there is separation between the pre-Clovis and Clovis layers, suggesting that the pre-Clovis tool-makers abandoned the site before the Clovis people moved in. What's particularly important about Area 15's date is that, unlike other, isolated finds that have been dated to pre-Clovis, the Gault site preserves multiple layers of occupation above the artifacts, providing what the authors call "distinct and well-separated occupational horizons." In other words, Area 15 isn't just a bunch of really old stone tools. It's a snapshot of an earlier time preserved in an entire photo album that chronicles the story of human occupation at a single site. A Pointed Find Analyzing 184 Area 15 artifacts, including projectile points, the team also found that some of the tools show a method of production and style never before seen. Stemmed projectile points in particular differ enough from Clovis points that the authors concluded they were "technologically and morphologically distinct" from the later style, suggesting a completely different group of people made them. Some of the other artifacts, such as hand axes, have some similarities to those seen in Clovis culture but are still distinct, leaving the researchers to conclude that the Area 15 artifacts "represent a unique pattern...that indicates regional adaptation after the initial colonization of the New World." Once considered both monolithic (no pun intended) and the first indigenous culture of the New World, forged from the first people to arrive in the Americas, Clovis is looking more like a late addition to a diverse and well-established cultural landscape that began millennia before the first enterprising toolmaker thought to create a fluted point. The study appears today in Science Advances.