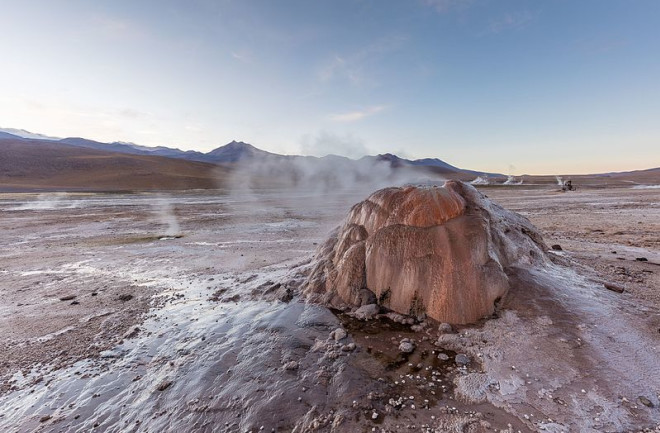 In 2007, the Mars Exploration Rover (MER) Spirit came across a slightly raised platform, roughly pentagonal in shape and 90 meters across, which scientists named Home Plate. The rocky outcrop had a base of solidified ash, with nearby deposits of gas-filled basalts. Next to the plateau, nubby, nodular chunks of rock showed up, and light-colored soil just beneath the surface was exposed by the rover’s wheels. Mineralogical spectra of the bright soil were beamed back to Earth, revealing, to the scientists’ surprise, that it was composed almost entirely of silica.

When the geological puzzle pieces were assembled, two main options emerged: Home Plate may have been a volcanic fumarole, spewing sulfuric acid at basaltic rocks and leaving silica behind, or it could signify the remnants of a mineral rich hot spring, whose silica-saturated water generated the knobby rocks. Either way, water and heat were likely involved, and the discovery led to an onslaught of new questions and exciting plans for further studies.

But then, the Spirit rover went silent, forcing MER scientists to get creative. To pursue the Home Plate mystery, they’ve scoured the Earth for mineralogical signals most similar to those found on Mars. By determining the conditions that best recapitulate the martian data, the thinking goes, we might be able to piece together the events of Mars’ ancient past.

Which is why Steve Ruff, a planetary scientist at Arizona State University and a key player in the Home Plate analysis, traveled thousands of miles to El Tatio, a series of hot springs in the rare air of Chile’s altiplano. At 14,000 feet high, the cold and dry landscape was as close to Mars as Ruff and his crew were going to get.

Once there, they tracked down opaline silica, an amorphous combination of SiO2 and water that forms thin, crusty deposits around water channels. Using the same type of infrared spectrometer that Spirit deployed on Mars, they were specifically on the lookout for samples that showed a strong absorption feature at 1,260 wavenumbers in the spectrum. While most of the Home Plate absorption bands made sense based on terrestrial geology, that 1,260 band had remained mysterious.

Remarkably, some samples showed the 1,260 feature – samples that had a thin crust of NaCl on top of the silica. Looking even closer with electron microscopy, these rocks showed thin layers that alternated between compacted silica and a hole-filled texture that has, in similar samples from New Zealand, been shaped through microbial activity. As biofilms of dense microbial communities grow, they excrete sugar-rich slime, which binds silica or calcium minerals that precipitate out of the hot water. Rocks are constructed, and while some cells are too sluggish to escape and are entombed by the silica, most squirm upward to the surface, leaving a network of holes that is filled in with salty water and ultimately coated with halite.

Bringing several types of data together – mineralogical, morphological, and chemical – Ruff and his colleagues have published a convincing report arguing that the opaline silica at Home Plate came from a hot spring rather than a volcanic fumarole. They also note that the martian “silica structures bear a strong resemblance to the microbially mediated microstromatolites at El Tatio.” It’s an alluring, if grasping, hypothesis, but one that makes scientists wonder what could have been if Spirit were still trundling along on the surface of Mars.