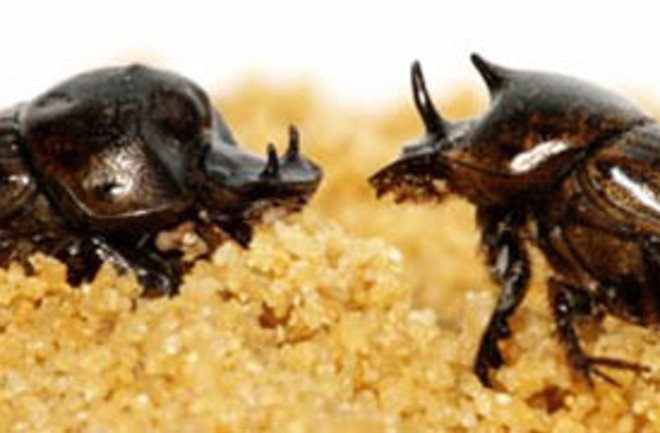 Male animals often use their horns to fight over females, but at least one species' females use their horns to fight over excrement. The species, no surprise, is the dung beetle. Unlike many of the animals we usually associate with elaborate horns, antlers, or other head weaponry—in which the male has the most impressive set—dung beetle females have horns that put the male version to shame. The reason, says a new study in the Proceedings of the Royal Society B, is that females must battle one another for that precious manure.

Nicola Watson and Leigh Simmons of the University of Western Australia, Perth, pitted female dung beetles (Onthophagus sagittarius) against each other in a race for dung – a valuable resource that provides nutrients for their eggs. Matched for body size, females with bigger horns managed to collect more dung and so provide better for their offspring [New Scientist]

. Dung beetles aren't the only species whose females grow horns: Small antelopes called duikers, for instance, have them for self-defense or territorial struggles.

. Thus, the researchers argue, the female beetle horns (on the right in the image) aren't some kind of crossover from the kind of horns that the males grow (left), but rather an independently evolved feature. And, they say, finding out that a feature like this evolved for female reproductive competition rather than defense against predators is exceedingly rare. You might think there'd be enough poop to go around, and that fighting over it wouldn't be necessary. However, there's a distinct advantage toward getting the very best dung to make the balls in which the beetles lay their eggs.

"Dung loses its usability quickly, so they have to seize it fast," says Watson. Female beetles have been found to steal dung, raid other brood balls, and replace existing eggs with their own [New Scientist]