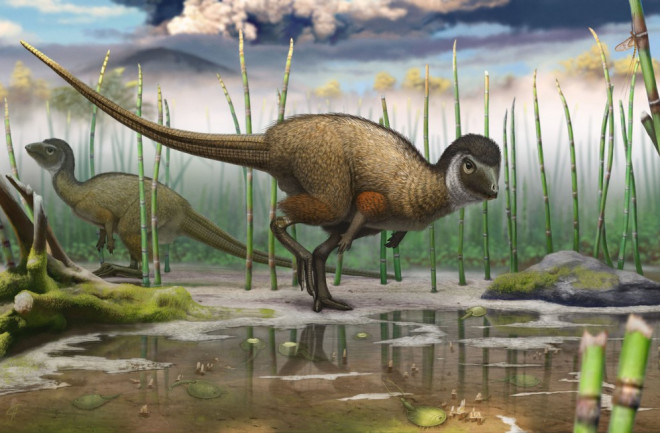 New dinosaur Kulindadromeus zabaikalicus wanders the lake-dotted lowlands of Jurassic Siberia in this artist's rendering. Image courtesy Andrey Atuchin. A new dinosaur is ruffling a few feathers in the ongoing debate over when and why dinosaurs evolved plumage — and which dinosaurs were rocking the feathered look. Feathers have been associated with several dinosaurs directly ancestral to birds. Additional studies have determined that some non-avian theropod dinosaurs — not directly ancestral to birds but still closely related — also had various types of plumage. Based on an older dinosaur not related to birds that was recently unearthed in Siberia, however, researchers believe many more dinosaurs — possibly all or most of them — had feathers. The newly described Siberian dinosaur, Kulindadromeus zabaikalicus,also helps paleontologists understand why feathers evolved at all. Researchers described K. zabaikalicus for the first time today in Science based on hundreds of fossils, including six partial skulls, from two sites in Russia. The animal belongs to the Ornithischian order of dinosaurs and is several branches away from birds on the Dinosauria family tree. Fossil finds dated from the Middle to Late Jurassic, roughly 176-145 million years ago.

So many bones... K. zabaikalicus fossils from southeastern Siberia awaiting classification at one of two excavation sites in July 2013. The sites yielded hundreds of skeletons and six partial skulls of the bipedal Jurassic herbivore, which had both scales and feathers. Photo credit: T. Hubin/RBINSK. zabaikalicus had both scales and feathers. Thanks to the excellent preservation of several of the fossils, researchers believe the dinosaur had several different types of scales and feathers that varied in size, location and complexity. The distribution and shape of the feather structures in particular suggest that K. zabaikalicus used its feathers as a means of insulation and possibly for signaling to other members of its species, such as potential mates. This find supports a growing amount of research that points to feathers evolving first to keep the animals warm and for display. Only much later in the fossil record did feathers play a role in flight. Based on plant, insect and crustacean fossils found alongside the dinosaur, researchers believe it lived in a lakeside environment. The bipedal dinosaur was about 1.5 meters long and ate plants. A handful of other Ornithischian dinosaur fossils have had evidence of quill and filament-like structures likened to proto-feathers, but many paleontologists had contended that only theropods had true feathers. Researchers behind today's K. zabaikalicus paper, however, say the Siberian dinosaur is evidence that feathers were likely widespread throughout Dinosauria.