‘Fear Itself’ Appears to Threaten Reproduction in Wildlife Prey

A new study found direct and considerable reductions in songbird populations and offspring viability as a result of fear. The work highlights important understandings about the predator and prey dynamic in wildlife conservation. 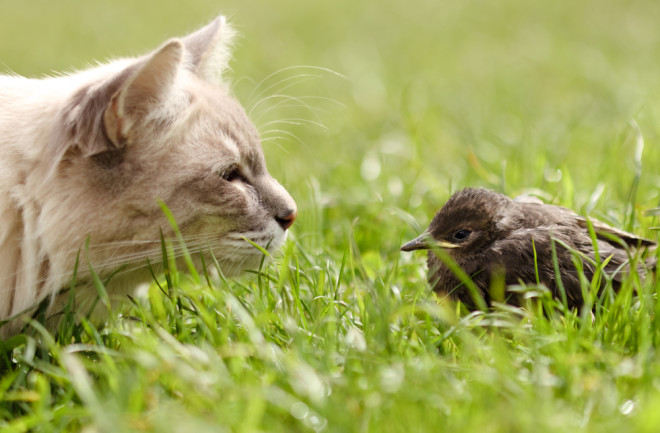 As you might expect, wild animals living in natural ecosystems seldom fit into the tidy controls and parameters preferred in scientific studies. That research hurdle leaves many unknown variables in the field of wildlife management, where elements such as predator-prey ratio can mean life or death for vulnerable species. But new research is expanding our understanding of the fear response in prey, which is a natural reaction to predator encounters. A recent experiment found that fear can have substantial adverse effects on reproduction and long-term population rates.

In an experiment on wild song sparrows, researchers demonstrated that the mere presence of “fear itself” could effectively halve a population size within just four or five years. (Perhaps President Franklin D. Roosevelt was correct in stating that "the only thing we have to fear is fear itself.")

The team studied multiple wild populations of songbirds over the course of three breeding seasons in British Columbia, Canada. To test their hypothesis about the influence of fear, the researchers intermittently played audio of predator and non-predator vocalizations in songbird territory on multiple islands in British Columbia. They then assessed the long-term responses and behaviors in the birds in various groups, which were reported this month in Proceedings of the National Academy of Sciences.

This research on over 400 offspring (as well as adult populations) involved daily nest checks, radio tagging more than 150 of those birds and continuous video monitoring. The data showed that “fear itself had cumulative, compounding adverse effects,” including reductions in offspring overall and notable permanent handicaps in surviving offspring.

The study, led by Liana Zanette, a specialist in behavioral ecology and wildlife population at Western University in Canada, attributed much of the offspring loss and impairment to reductions in parental investment and care that resulted from fear. Multiple other studies, for example, have demonstrated how prey regularly reduce food intake when they are trying to avoid a predator. Zanette and her colleagues observed hungrier offspring and significantly less fat in hatchlings and juveniles in the fear-amplified population.

These findings may have meaningful implications for conservation models and practices today, which often rely heavily on direct kill rates and may be overlooking a crucial piece of the puzzle. “Inferring the effects of predators using data on direct killing alone risks dramatically underestimating their total impact,” the study authors wrote.

They also noted that the findings and associated impacts on prey likely apply to mammals and bird populations.