Eruption in the Canary Islands Is Likely Its Largest in Centuries

It has been over a month since the eruption on La Palma began and now is likely the largest in the Canary Islands since the 1730s. 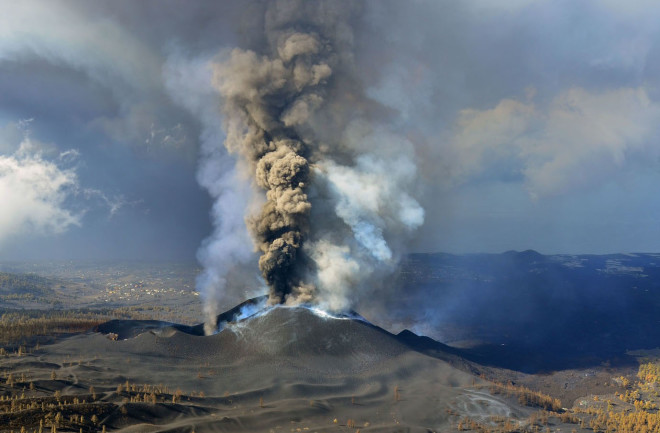 The main vent of the La Palma Eruption on October 27, 2021. Credit: INVOLCAN.

The eruption from Cumbre Vieja on La Palma in the Canary Islands is still going strong. The dominantly lava flow eruption that started on September 19 has now covered almost 3.5 square miles (9 square kilometers) and reached out into the surrounding Atlantic Ocean. With continuing earthquakes and gas emissions from the volcano, it doesn't appear that the eruption will end any time soon.

The lava flow field has been devastating for communities on both sides of the volcano. Lava flows have inundated the west side of the island and have so far destroyed almost 2,000 buildings including 1,000 homes. On the east side, the eruption has dumped over 10,000,000 cubic yards (8 million cubic meters) of volcanic debris (tephra) on the landscape. All in all, La Palma has seen extensive damage to buildings and infrastructure that will likely take a long time to repair once the eruption ceases. Over 7,500 remain evacuated from the area being impacted by the lava flows.

The Explosive Character of the Eruption

The tephra might seem like a bit of a surprise for an eruption that has produced abundant lava flows, but the powerful lava fountains that have occurred at the 4-5 vents of the eruption throw volcanic debris high into the air. Some of the lava fountains have towered almost 2,000 feet (600 meters) over the surrounding landscape while ash and debris have thrown to altitudes as high as 13,000 feet (4 kilometers). This has allowed the volcanic ash to be blown across the islands by the prevailing winds.

On top of this, the loosely constructed cone built during the eruption partially collapsed on October 23 (see the video above). This sent large chunks of solidified lava down the active lava channels. The lava flows have been steadily widening the area they have covered on the island, although some of the more recent lava flows have been moving across some of the earlier flows of the eruption.

All in all, this eruption on La Palma appears to have overtaken the 1585 eruption for the largest (by volume) in recorded history for the island. The 1585 eruption lasted 85 days with 5 people dying from inhalation of gases during heavy ash falls. That eruption was quite different than the current, where instead of just basanite (similar to basalt) lava flows, the eruption had the extrusion of lava flows and sticky phonolite (similar to rhyolite) domes or spines totalling ~0.07 cubic miles (0.3 cubic kilometers) of material.

UPDATE: Simon Carn has pointed out that the 1730-36 eruption of Lanzarote is by far the largest in the archipelago for the past 500 years. That eruption produced 3-5 cubic kilometers of volcanic material.

How Does This Compare to 2018 Kīlauea?

Likely the most famous lava flow eruption over the past decade was the 2018 Leilani Estates eruption on the Lower East Rift Zone of Kīlauea. The La Palma eruption hasn't covered as much territory yet (3.5 vs. 5.2 square miles / 9 vs. 13.7 square kilometers) but it has destroyed many more buildings (~2,000 vs. ~700). This is quite obviously due to the density of people living near the volcano on La Palma and the relatively sparse populations on the eastern side of the big island of Hawaii. That eruption lasted from early May 2018 until early September 2018, a span of ~4-5 months.

The recovery from the Kīlauea eruption is estimated to likely cost $800 million. With the increased damage to buildings and infrastructure on La Palma, that cost may be much higher for the island. So far, the Spanish government has pledged $239 million to help with the eventual recovery, but we still have a ways to go before this eruption ends.