Moving to a new area can be a daunting experience, especially if you don't know anyone. At first, you might cling to any friends who do live nearby but eventually, you meet new people and start to integrate. As it is with humans, so it is with elephants.

Noa Pinter-Wollman and colleagues from the University of California, Davis wanted to study how African elephants behave when they move to new environments. This happens quite naturally as elephants live in dynamic societies where small family groups continuously merge with, and separate from, each other. But they also face new territories with increasing regularity as human activity encroaches on their home ranges and forces them further afield, and as increasing conservation efforts lead to individuals being deliberately moved, or exchanged between zoos and wildlife parks.

Pinter-Wollman took advantage of just one such forced relocation to see how the animals would react. In September 2005, in an effort to reduce conflicts between humans and elephants, Kenya's Wildlife Service moved 150 individuals from the Shimba Hills National Reserve to the Tsavo East National Park, some 160km away. They consisted of 20 groups of around 7 individuals each - mainly adult females and calves - and 20 independent males. Their new home was very different to their old one and Pinter-Wollman wanted to see how they reacted to it.

By identifying the immigrants through ties on their tails and numbers on their backs, she found that, at first, they elephants spent a lot of time with others. But they became socially segregated and would mostly interact with other migrants, largely to the exclusion of the local Tsavo elephants. Their amity wasn't solely due to family, just familiarity - the newcomers would happily mix with other unrelated groups from their same home region. And the more the immigrants stuck together, the less likely they were to mingle with the locals.

Over time, things changed. A year later and the displaced elephants had become much less segregated, moving from a closed enclave into an integrated part of the social structure within their new home. But on the whole, they also became less sociable as time went by, with both new acquaintances and comrades from home. 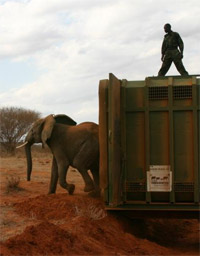 This is the first study to look at how an animal's desire for companionship changes depending on how well they know their environment. Pinter-Wollman says that the elephants' behaviour suggests that in the face of unfamiliar ground, it pays them to associate with others so that they can learn from one another. Indeed, among the migrants, the most sociable ones were also in better health (although this could be because sick elephants are shunned). Over time, they become more familiar with their new stomping grounds and the need to socialise lessens.

The initial social segregation probably reflects the strong social ties that elephants have. While it would benefit the newcomers to learn about their new environment from the natives, that may not have been possible. On two anecdotal occasions, she saw the locals behaving aggressively towards the unfamiliar elephants in their midst. It's behaviour that really seems all-too-human.