Climate change knocked mammoths down, humans finished them off

Did our ancestors exterminate the woolly mammoth? Well, sort of. According to a new study, humans only delivered a killing blow to a species that had already been driven to the brink of extinction by changing climates. Corralled into a tiny range by habitat loss, the diminished mammoth population became particularly vulnerable to the spears of hunters. We just kicked them while they were down.

The woolly mammoth first walked the earth about 300,000 years ago during the Pleistocene period. They were well adapted to survive in the dry and cold habitat known as the 'steppe-tundra'. Despite the sparse plant life there, the woolly mammoths were very successful, spreading out in a belt across the Northern hemisphere.

Their fortunes began to change as the Pleistocene gave way to the Holocene. The climate around them started to become warmer and wetter and the shrinking steppe-tundras greatly reduced the mammoth's habitats. The species made its last stand on the small Wrangel Island in Siberia before finally succumbing to extinction.

But climate change isn't the whole story. About 40,000 years ago, those relentless predators - human beings - started encroaching into the woolly mammoth's range in northern Eurasia. Which of these two threats, climate change or human hunters, sealed the mammoth's fate?

Climate change has been blamed in the past, but some scientists have noted that the species had survived through other warm spells, including a period about 126,000 years ago that shrunk its habitat to a larger extent than the Holocene warming. The arrival of humans also fits the general timing, but some sources claim that there is little direct evidence of our ancestors actually hunting mammoths. 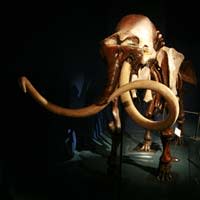 David Nogues-Bravo from the National Museum of Natural Sciences in Madrid thinks that the two factors worked together, with climate changes weakening the population and humans finishing it off. Taking factors like temperature and rainfall into account, he ran simulations of the mammoth's prehistoric climate at five time points over a span of 120,000 years. These models were bolstered by data from the carbon-dated fossil remains of woolly mammoths that lived throughout Eurasia during this time period.

The simulations showed that the area of land containing suitable habitats for the mammoths was incredibly sparse about 126,000 years ago. Then, the giants were most likely confined to the very north of Eurasia but as the climate cooled, their geographical range increased by 26 times to encompass much of the northern continent.

The turning point happened about 42,000 years ago when their habitat started to shrink catastrophically over the course of 36,000 years, relegating the species to an area just 11% of its former size. Even so, their range was still larger than it was at the previous low.

Nogues-Bravo then modelled how the mammoths that were still around 6,000 years ago would have reacted to being hunted by humans where their ranges overlapped. He found that even with an optimistic estimate of the population's size and strength, each human would have had to kill just one mammoth every three years to drive the species to extinction. With a pessimistic appraisal of mammoth numbers, the death of just one mammoth every 200 years at the hands of each human would have been enough to seal their fate.

The diagram below shows the beast's plight over time. The red areas represent suitable habitat, and the green areas less so. The black line shows the frontline of the human invasion. 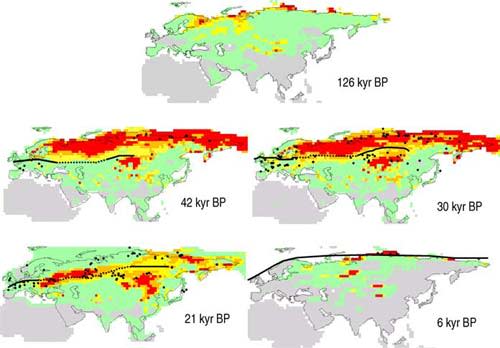 If humans had never arrived in northern Eurasia, the mammoths might still have made it. Nogues-Bravo suggests that they would probably have survived in small pockets of suitable habitat and made use of fringing and less welcoming areas, as they probably did during the warm spell 126,000 years ago. But they never got the chance. Our ancestors delivered the coup de grâce to a failing population that was too small to withstand the hunting pressures they were subjected to.

Image from PLoS; painting by Mauricio Anton; photo by Rama