Elephants recognise themselves in mirror

You are on a date and by all accounts, it's going well. Midway through dinner, you excuse yourself and head to the bathroom where, to your chagrin, the mirror reveals that you have a streak of sauce on the side of your face. Embarrassed, you wipe it away and rejoin your date.

It's a fairly innocuous scene but it requires an ability that only the most intelligent of animals possess - self-awareness. It's the understanding that you exist as an individual, separate from others. Having it is a vital step to understanding that others are similarly aware and have their own thoughts and desires. As such, it is intimately linked to mental qualities like empathy and selflessness. This may seem obvious to us but even human children only become self-aware in their second year of life.

In the animal kingdom, the skill is even rarer and has only been found in the most intelligent of species - humans, apes, dolphins and more recently, magpies. In 2006, Joshua Plotnik of Emory University added elephants to that list.

Elephants are highly intelligent and very empathic. They have been known to help each other and may even mourn their dead. Plotnik, together with Frans de Waal and Diana Reiss, set out to test for self-awareness in three Asian elephants.

The classic way of testing an animal for self-awareness is to see if it can recognise itself in a mirror. On first glance, all species react in the same way, by making the appropriate social gestures, inspecting the mirror, and often checking behind it to look for the stranger. But a self-aware animal goes further - it starts to conduct repetitive tests, such as touching its face to see if the reflection follows suit. After a while, it starts to understand that the mirror image is itself. 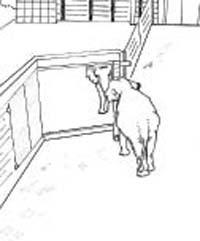 Researchers test for this awareness by seeing if the animal can touch a mark on its body that it couldn't otherwise see and that's exactly what Plotnik did with three Asian elephants at New York's Bronx Zoo. The trio, named Happy, Maxine and Patty, were given a literally jumbo-sized mirror in their yard.

When the mirror was revealed, each elephant started to spend more time with it. They started to investigate the mirror and the wall it was mounted on with their trunks, peering behind or under it. As the days went on, they started investigating the mirror less and less. None of them made any attempt to socially interact with their reflection and they would do things that they would normally avoid when directly in front of other elephants, like eating.

They also started to make unusual body and trunk movements in front of the mirror in the same way that a person would check out a new outfit in a dressing room. They were clearly examining their own bodies, pulling their ears or sticking their trunks in their mouths, in a way that they never did without the mirror. 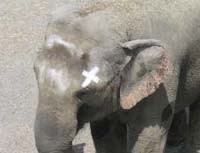 At this point, Plotnik put the elephants through the mark test, by placing a visible mark on the right side of their heads, and an invisible control mark on the left side. Elephants use their trunks like humans use their hand and can touch most of their body surface with it, making them ideal subjects for the mirror test.

Of the three, only Happy passed. After being marked, he examined herself in the mirror by moving in and out of view, and began to probe the visible mark with her trunk while ignoring the invisible sham one. Even though Maxine and Patty both failed, Plotnik isn't discouraged, pointing out that even in the frequently-tested chimpanzee, only one in two individuals pass the test.

The test will clearly need to be repeated in other elephants, but for the moment, this study provides compelling evidence that the Asian elephant can join the illustrious self-awareness club.

NB The history of mirror self-recognition is fascinating and is well beyond the scope of this article. While the test is undoubtedly useful, there is some debate about whether failing it proves that an animal is not self-aware. Gorillas do poorly in the test, but this may be because they see direct facial contact as a sign of aggression. Dogs tend to fail too, but their main sense is smell not sight.

Image: top photo by SuperJew, others from PNAS