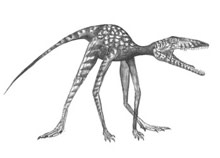 The bones of dinosaurs have told countless tales about their origins and behaviour, but dinosaurs left behind more than just their skeletons. As they walked about, they made tracks, and some of these also fossilised over time. They too are very informative and a new set, made by some of the dinosaurs’ closest relatives, reveals how these ruling reptiles rose to power at a leisurely pace.

Dinosaurs evolved during the Triassic period from among a broader group called the dinosauromorphs. These include all dinosaurs as well as their closest relatives, species like Lagerpeton and Lagosuchus that only just miss out on membership in the dinosaur club. Fossils of these latter animals are extremely rare and only ten or so species are well documented. Their tracks, on the other hand, are more common.

Indeed [their footprints] suggest that the dinosauromorphs evolved in a geological heartbeat after the greatest mass extinction of all time, a cataclysmic event “when life nearly died”.

For more about the footprints, and how they might push back the date of these dinosauromorphs back to 250 million years ago, check out the rest of the post