A geological mystery is unfolding far beneath our feet, and it may shed light on the life-sustaining magnetic field that extends far above our heads. 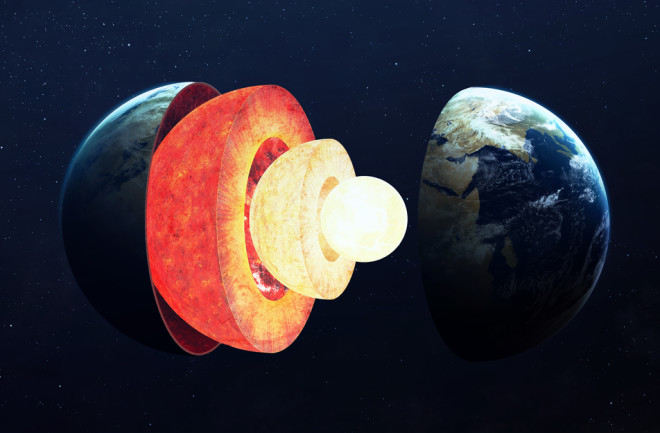 Each year, the solid-iron inner core at the heart of our planet expands by about a millimeter as the Earth’s nether regions cool and solidify. According to a recent study, one side appears to be growing faster — but scientists don’t know why.

This phenomenon likely dates back to the inner core’s creation, between 1.5 billion and half a billion years ago. At this point, after billions of years of cooling, the Earth’s fiery interior finally lost enough heat to begin an ongoing process of crystallization. Now, as the outer core’s molten iron loses heat, it crystallizes to become the newest layer of the inner core.

The center of this hyperactive hemisphere lies 1,800 miles under Indonesia’s Banda Sea: About 60 percent more iron crystals form at that point on the inner core than on the other side of the world.

Today, the inner core boasts a radius of about 750 miles (not to mention a scorching temperature of more than 9,000 degrees Fahrenheit). Yet even after an eon of lopsided growth, it hasn’t actually deformed. Gravity acts constantly to mold it, redistributing the excess in the east and maintaining a spherical shape. Besides posing a captivating puzzle, this asymmetrical growth may help power the Earth’s magnetic field (and enable our survival).

For such a small and distant layer in the colossal onion we call home, the inner core has tremendous influence on us surface dwellers. Daniel Frost, a geophysicist at the University of California, Berkeley, and lead author of the new study, jokes that he is “always having to justify the importance of the inner core.” In fact, we owe it our existence — as it cools, it releases heat and creates convection in the outer core. Ultimately, that churning liquid iron (known as the geodynamo) generates the magnetic field that protects life on this planet from dangerous solar winds.

Likewise, the upper layers influence the core. “Everything is affected by what’s above it,” Frost says. The inner core is surrounded by the outer core, the outer core by the mantle, the mantle by the crust. So in order for the inner core to grow, it must transfer its heat — some residual from Earth’s formation, some radioactive from decaying elements — to each successive layer. In turn, each layer must be capable of receiving the heat.

That suggests one possible mechanism for the inner core’s uneven cooling. The point of greatest growth beneath Indonesia is a major subduction zone. There, relatively cool chunks of tectonic plates plunge into and chill the burning mantle. “It’s kind of like dropping ice cubes in,” Frost says. This temperature gradient allows the deeper layers to shed their heat, thereby solidifying the inner core.

While these “ice cubes” are puny, he suspects they may be enough to tip the scale. “This is all a delicate balance,” he says. “I don’t think you need much to precipitate a difference like this.” However, this explanation may be too simplistic: It’s unclear whether heat from the bowels of the Earth dissipates in a vertical line. The diving Indonesian crust might just as easily cool the core lying underneath, say, China or Saudi Arabia, rather than below Indonesia.

For now, the asymmetry itself remains unexplained, but it does offer one solution to another longstanding enigma: why the iron crystals in the inner core align parallel to Earth’s North-South rotation axis. (No one has observed the structure of the core directly, but seismologists have observed that earthquakes travel faster through the core between the North and South Poles than across the equator.) All things being equal, the crystals should be aligned randomly.

The Berkeley researchers suggest the answer lies in the core’s lopsided formation. As gravity redistributes the crystals, it brings them into a sort of “flow,” according to their computer model. “Imagine throwing sticks into a river,” Frost says. “If the river is flowing, the sticks will align with the flow.” Similarly, because the inner core is flowing, the crystals align with it and form an orderly lattice that serves as a high-speed interstate for subterranean tremors.

To understand the connection between this asymmetry and the magnetic field, more research is needed. But given the vital role this planetary armor plays in our existence, it’s worth investigating the processes that underpin it. Scientists have long known that the magnetic field reverses every so often (we’re overdue for a switch), and that it weakens temporarily during transition. But it isn’t evident why. When it comes to new findings on the Earth’s core, Frost says, “The question is always, ‘Does this relate to the reversal of the magnetic field?’”