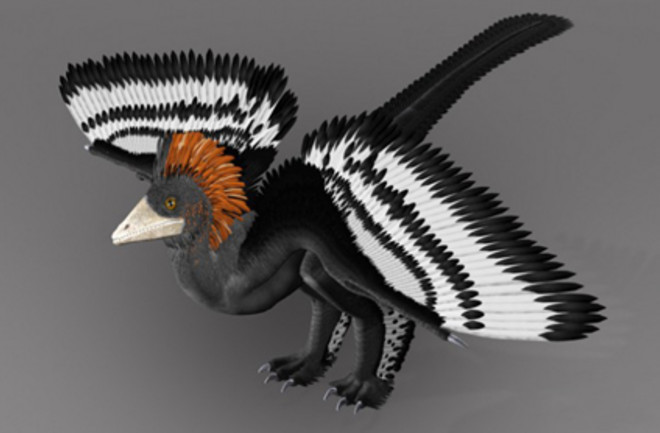 Last week, a study found that an early dinosaur had a red mohawk and striped tail, one of the first pieces of solid evidence regarding dinosaur coloration. But a new study forthcoming in Science goes one step further, mapping in full 3D the strange plumage of the earliest-known feathered dinosaur, Anchiornis huxleyi. Richard O. Prum, leader of the new study, was among the first to document that pigment-giving structures called melanosomes could survive fossilized for millions of years.

. British and Chinese scientists used this technique to release last week's color study of the 125-million-year-old Sinosauropteryx, and Prum's team applied it to the 150-million-year-old Anchiornis. Because the feathers of Anchiornis (which lived in what is now China) covered nearly its entire body and were so well preserved, Prum's team could create this detailed color map.

They believe its body was grey; it had a reddish-brown Mohawk-like crest, speckles on its face and white feathers with black tips on its wings and legs. The scientists say the pattern of colour on the wings and leg feathers is very like that of modern Spangled Hamburg chickens [BBC News]

. The researchers behind last week's announcement argued that perhaps Sinosauropteryx's fancy color scheme played a role in courtship displays. The same idea could be true for Anchiornis, and could help explain how feathers evolved in the first place, says paleontologist Philip J. Currie:

“Ancient creatures didn’t just sprout feathers and start flying. The feathers were there for another reason first.... Dinosaurs were very visual animals, just like birds are” [Wired.com]

. Expect the dino color studies to keep coming, and perhaps the verbal barbs as well. Study co-author Jakob Vinther wasn't too kind to the team the published last week's study:

"They are in the Stone Age when it comes to understanding melanosome fossilization and interpretation of original colors," he says [Not Exactly Rocket Science]

. His disdain comes because he says the other team's assessment relied on only one of the two kinds of melanosomes, while color, he says, can vary greatly depending on how the two are mixed. Related Content: 80beats: New Analysis Reveals Color of Dinosaur Feathers for the First Time 80beats: Model Suggests 4-Winged Dino Glided Like a Flying Squirrel 80beats: How Dinosaur Feet Evolved Into Bird Wings: New Fossil Provides Clues 80beats: Study: Velociraptor’s Cousin Had a Venomous Bite and Saber Teeth The Loom: Moving Dinosaurs Into Technicolor DISCOVER: Did T-Rex Taste Like Chicken?Image: National Geographic