A new study suggests that the raccoons raiding your trash are shy. 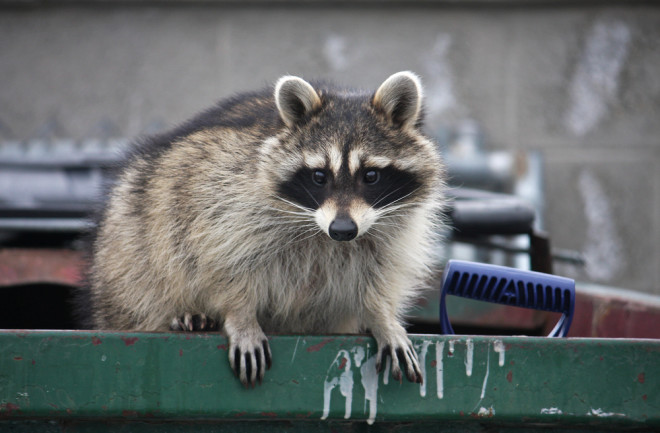 Some people are more suited to cities than others, and it turns out that the same is true among animals. In fact, recent research in the Journal of Experimental Biology suggests that an animal’s temperament affects its ability to make use of the ample sources of shelter and food contained in urban and suburban areas.

Specifically, the study suggests that docile, timid raccoons are actually best at taking advantage of the amenities that cities provide, and that includes their abundance of trash cans and dumpsters, filled to the brim with food.

Of course, cities attract people and critters alike. Pigeons, mice, rats and raccoons all flock to these spaces in an attempt to secure consistent sources of shelter and food. But what, specifically, makes an animal fit for city living?

"Several cognitive abilities have been proposed as particularly important," says Lauren Stanton, a biologist at the University of California, Berkeley, in a press release.

Biologists tend to agree that the abilities to learn and to adapt are valuable for just about any animal in the city. But they still do not understand what makes certain species and specific individuals such successful city dwellers in comparison to others.

Wanting to know what makes raccoons, in particular, such savvy residents, Stanton and a team of researchers found that timid, docile raccoons are best at adapting to the city and its changes. And they are better at breaking into objects such as trash bins in search of food.

These findings, Stanton and the team say, do more than provide insight into the temperament and behavior of urban and suburban animals. They may also affect animal management strategies for years and years to come.

To determine whether bold raccoons or timid raccoons take better advantage of the opportunities of the city, the researchers started by distinguishing between the two types of individuals in the wild. To do this, they set traps filled with food throughout the city of Laramie, Wyoming and caught around 200 animals. They then tested whether the trapped raccoons tended to behave boldly or timidly before inserting identification tags in their shoulders and releasing them back into the city.

With this baseline assessment of the animals’ temperaments, the team then tested the raccoons’ abilities to adjust and adapt to their surroundings. The researchers placed raccoon-sized boxes with two buttons all across Laramie. They then observed several raccoons climb inside the trash can-like containers and press the proper button to produce a food reward.

According to the team, once the raccoons learned how to enter the box and obtain their treat, their task only became tougher. The buttons were eventually swapped around to test whether the raccoons could overcome an additional challenge.

Finally, after two years of testing, 27 raccoons could enter the box, 19 could obtain their treat, and 17 could press the second button when the first button failed to produce a reward.

The following analysis of the raccoon's identities indicated that the younger animals were more eager to explore the containers, while the older animals were more willing to shift their strategies once the buttons were swapped. More interesting still, the analysis also revealed that the timid, docile raccoons navigated the boxes best, "which suggests a potential relationship between emotional reactivity and cognitive ability," Stanton says in a press release.

Ultimately, in addition to illuminating the activities of urban and suburban wildlife, Stanton and the team state that their findings could also improve management strategies for bothersome raccoons, skilled at breaking into the trash. In fact, the findings suggest that relocating timid, docile raccoons might be the best strategy for solving human-raccoon conflicts.