Do Dogs Have Selective Hearing?

Owners can sometimes run into their dog’s unwillingness to obey commands – but are canines choosing not to listen? 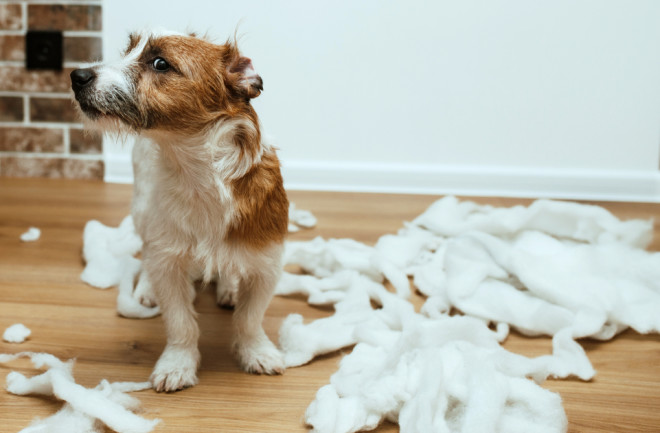 Small terrior dog that tore up fabric in the house. (Credit: san4ezz/Shutterstock)

It’s easy to become frustrated if, despite your best efforts and intentions, your dog is ignoring your commands on a routine basis. It’s something most dog owners will likely experience at one time or another, and it can inevitably lead to the question: Does my dog have selective hearing?

Humans have the capacity to focus on specific sounds even in loud and audibly convoluted environments. For example, you can converse with a friend at a concert. But what of our canine companions?

We have the cognitive skills to tune out some sounds, but this is more difficult for dogs because of their neurological ability, according to Laura Kretschmer, principal investigator at The Facility for Education and Testing of Canine Hearing and Laboratory for Animal Bioacoustics.

Focusing on what’s important to their wellbeing, dogs tune into sounds that deal with food, their name and discipline.

“Dogs can be taught to accurately respond to dozens of commands either through speaking to them or by using sign language with them,” Kretschmer adds. “Some breeds seem to be easier to train to listen, especially if they have a genetic predisposition to follow commands, such as dogs in the herding group.”

So, it could be that some dogs are more adept at following commands. But according to Evan MacLean, director of the Arizona Canine Cognition Center at the University of Arizona, focusing on “selective hearing” is arguably not the best approach when trying to understand why dogs sometimes refrain from obeying commands.

Instead, MacLean suggests that dogs have “selective attention” instead of selective hearing. In general, when animals put all their cognitive resources towards stimuli and ignore less important stimuli, that is the process of selective attention. It is possible for dogs to selectively focus on certain auditory stimuli and ignore other auditory stimuli that they find irrelevant, according to MacLean.

“Of course, it's also possible that dogs can hear things, attend to them and then choose not to act on the information. In the latter case, it's not so much about selective hearing — because the dogs hear and attend to the stimuli — but rather about choosing to not respond,” says MacLean.

According to Kretschmer, the surrounding environment can also play an important role in dictating a dog’s decision-making processes.

“[The environment] can be a complicating factor,” Kretschmer says. “Some dogs just won't listen if they are bred to chase squirrels or herd sheep and the handlers aren't making their commands clear. Also, any environment with too much noise, meaning the dog can't actually hear a command properly, will potentially lead to inconsistent responses.”

Additionally, dogs can become less obedient if they are frightened, or if they find themselves in a novel situation that they don’t yet know how to navigate. However, according to Kretschmer, the most likely reason for a dog to ignore commands is rather simple: inadequate training.

“Positive, consistent and clear reinforcement is critical for dogs' learning,” Kretschmer says. “Negative reinforcement and punishment can ensure that dogs do not learn and might even cause them to rebel.”

Commands and Training for Dogs

In a 2020 study, researchers at the University of Lincoln in the U.K. compared the hearing and auditory functions of dogs and humans. The study, amongst other things, determined that humans are often guilty of assuming a dog’s hearing abilities are “similar to their own” and, as a result, attempt to communicate with dogs in a manner that is not always effective. This approach to interacting with a dog, the researchers suggest, could lead to owners becoming frustrated when their commands are not carried out.

This is a point Peter M. Skip Scheifele, a professor specializing in clinical animal audiology at the University of Cincinnati, is also keen to make. “In training, consistency, timing and observation are the three important aspects,” Scheifele says.

To help dogs pay attention to commands even when there are distractions, owners can rely on on-leash training. Owners will also find best results if the training is consistent, according to Scheifele.

Other studies have shown that dogs and their owners commonly develop similar personalities. If the owner’s training is substandard or lazy, then the dog will become less likely — and indeed less able — to accurately acknowledge and subsequently obey commands.

"If the dog is well trained and secure in its relation to the human handler then the environment shouldn't make any difference,” Scheifele concludes.