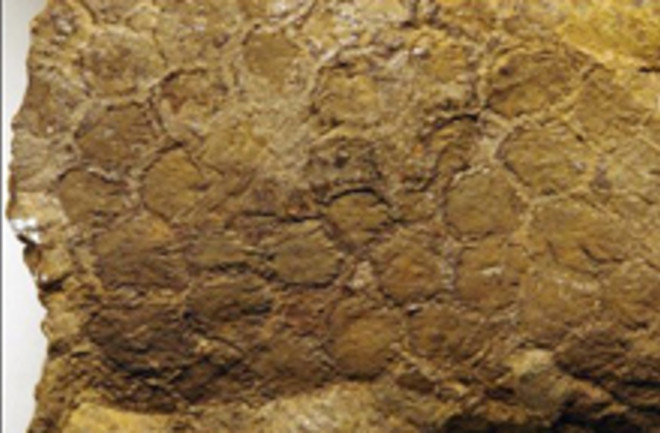 The duck-billed dinosaurs have been giving up their secrets lately. Just yesterday researchers revealed new details of how hadrosaurs chewed their food, using a set of teeth that look like a "cranial cuisinart." Today, paleontologists have put the hadrosaur's skin on display, thanks to a "mummified" creature that shows the shape of its soft tissue and cell-like structures.

Such a discovery was possible because the dinosaur's skin fossilized before bacteria had a chance to eat up the tissue. It is "absolutely amazing to be able to identify organic molecules from soft tissue that belonged to a beast that died over 66 million years ago.... This is the closest you're going to get to patting the animal" [National Geographic News]

, says lead researcher Phillip Manning. For the study, which will be published in the Proceedings of the Royal Society B, researchers used advanced imaging techniques to get under the hadrosaur's skin.

A study of the cell structures show that, like modern-day crocodiles and birds, the skin was made up of two layers: a surface epidermis against a deeper dermis layer made up of dense connective tissue. Although that finding is what might have been expected based on the presumed lineage of the modern animals, Dr Manning said it is "clean science" [BBC News]

that further supports the theory that dinosaurs left behind some descendants. The fossil of the hippo-sized creature was discovered in 1999 by a teenager digging in his family's North Dakota property.

The dinosaur, approximately 7.5 meters (25 feet) long, apparently died on the banks of a sandy channel, perhaps near the bend of a river, where its body was rapidly buried under accumulating sediment. The waterlogged soil entombed it in a mineral-rich soup before the body could decay much, thus ensuring highly detailed preservation [Scientific American].