Duck-Billed Dinosaur's Shifting Teeth Were Like a "Cranial Cuisinart" 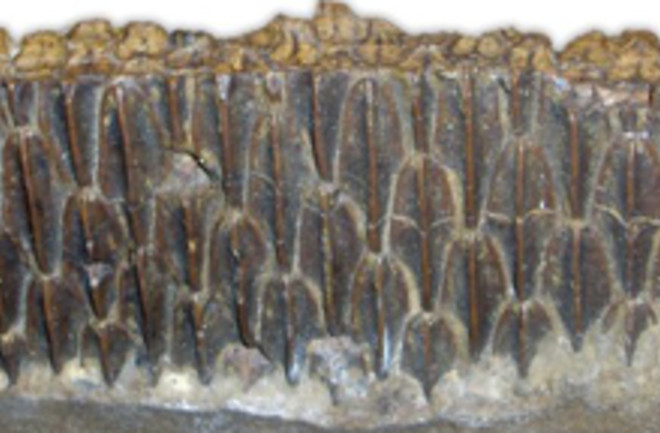 The duck-billed dinosaurs more properly known as hadrosaurs were the most prolific vegetarians of the late Cretaceous period, and researchers think their unusual mouth mechanics may have played a role in their evolutionary success. A new study of the hadrosaur Edmontosaurus examined the animal's fossilized teeth in unprecedented detail.

Using an electron scanning microscope, researchers were able to examine minute scratches on individual dino teeth made by daily wear and tear 65 million to 68 million years ago to test competing theories about how the creatures may have munched [Scientific American].

The mouth of a hadrosaur has been compared to a "cranial Cuisinart," with hundreds of teeth lined up in rows to chop up the tough plants of the late Cretaceous. But the dinosaurs didn't have the complex jaw joint that mammals have, leaving scientists to puzzle over exactly how hadrosaurs did all that chewing [MSNBC].

The study, published in the Proceedings of the National Academy of Sciences, found scratches indicating that the movements of a hadrosaur's teeth was a complicated matter, involving sideways and front to back motions as well as the traditional up and down chomp. The findings show that the duck-billed dinosaurs had found a very sophisticated method of breaking down food, says lead researcher Paul Barrett.

"This shows that hadrosaurs did chew, but in a completely different way to anything alive today.... Rather than a flexible lower jaw joint, they had a hinge between the upper jaws and the rest of the skull. As they bit down on their food the upper jaws were forced outwards, flexing along this hinge so that the tooth surfaces slid sideways across each other, grinding and shredding food in the process" [LiveScience].

In contrast, another common group of dinosaurs from the Cretaceous, the sauropods, were largely dependent on gizzard stones, rocks inside their digestive tracks that ground up food. As for what the duck-billed dinosaurs ate, the researchers say the pattern of scratches is similar to that seen in modern grass-eaters. But since grasses weren't common in the late Cretaceous, the researchers hypothesize that the dinos chowed down on horsetails and other low-lying vegetation, instead of the twigs and tree foliage that hadrosaurs are depicted eating in the movie Jurassic Park. Related Content: 80beats: How Dinosaur Feet Evolved Into Bird Wings: New Fossil Provides Clues 80beats: The Dilemma of the Dinosaur Stance: How Did They Hold Their Heads? 80beats: Dinosaur Handprints Show It Could “Hold a Basketball,” Not Dribble 80beats: To Attract Mates, This Dino May Have Shaken a Tail Feather 80beats: Stay-at-Home Dinosaur Dads May Have Hatched Eggs and Cared for YoungImage: Vince Williams, University of Leicester. Multiple rows of teeth from the lower jaw of a hadrosaur.