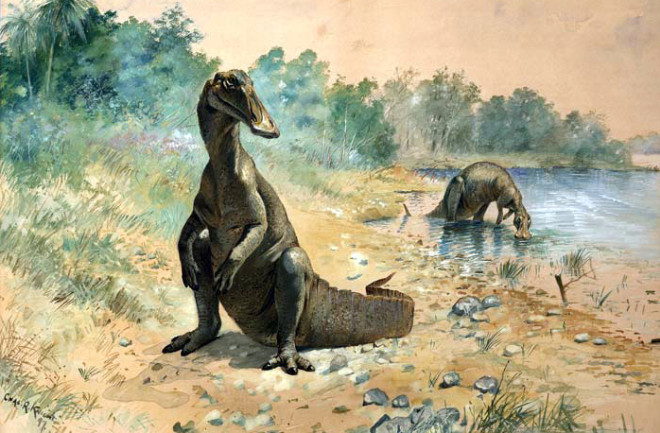 Have researchers been as wrong about the dinosaur diet as famed illustrator Charles Knight was about hadrosaurs in this rather sketchy 1897 rendering? Duckbilled dinosaurs like this fella usually put four on the floor, and no dino dragged its tail or had the sprawling posture shown here. (Credit American Museum of Natural History) Like that vegetarian friend of yours who sneaks a piece of bacon when no one's looking, it appears that at least some dinosaurs previously thought to be dedicated herbivores occasionally consumed critters. That's at least according to new research that involved getting up close and investigative with those goldmines of lifestyle information: coprolites. Researchers took a look at fossilized feces from more than 15 separate deposits within the Kaiparowits Formation of Utah. The Kaiparowits, dated to roughly 75 million years ago, is a tremendously rich source of information about dinosaurs...and, it turns out, the dinosaur diet. The sheer volume of the coprolites suggested to the team that they were from a larger dinosaur. The amount of wood preserved in the prehistoric poop, meanwhile, pointed to an animal that was capable of processing fibrous material. The most likely candidate, say the researchers, were duckbilled dinosaurs, such as the hadrosaur. Like other ornithischian dinosaurs, the duckbilled variety have adaptations for chowing down on vegetation (and, we thought, vegetation only). That includes a predentary, a single bone in the front of the lower jaw, sometimes likened to a beak, that helped the animal do to branches and leaves what your garden shears do to the rhododendron. Closer inspection of the coprolites, however, turned up more than just wood. For starters, the researchers were able to determine that the coniferous wood had been degraded by fungus before consumption — yep, the dinosaurs were eating rotten wood. That's actually a smart eating strategy. Rotten wood, a bit mashed up to begin with, is easier to digest. (Or so studies of cattle have shown. Don't try this at home.) And even more intriguing: the coprolites were full of pieces of crustacean shell. Although unable to identify the species of crustacean consumed, the animals were large enough that the scientists describe them as "sizeable" and unlikely to have been consumed unintentionally. The researchers note that it's unlikely this pile of preserved poo full of rotten wood and crusty critters represents the dinosaurs' year-round diet. They believe instead that it captures a seasonal snapshot. In fact, the opportunistic eaters may have added a little extra protein to the menu when tending to nests (and eggs about to hatch) kept them close to home at certain times of the year. You know what else adapts to seasonal resource availability, particularly adding animals to an otherwise herbivorous diet? A number of modern dinosaurs: birds. If you want more rotten wood and coprolites, and you know you do, dig in to the paper, published in Scientific Reports.