In 1995, a palaeontologist called Mark Norrell reported an amazing discovery - the fossilised remains of a dinosaur called Troodon, sitting on top of a large clutch of eggs. The fossil was so well-preserved and its posture so unmistakeable that it provided strong proof that some dinosaurs incubated their eggs just as modern birds do. And since then, two other small predatory species - Oviraptor and Citipati - have been found in brooding positions on top of egg clutches. 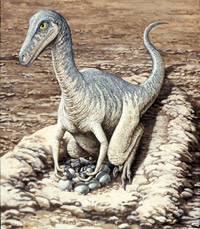 But a subtler look at these fossils reveal much more about dinosaur parenting than the simple fact that it existed. To David Varricchio from Montana State University, they also tell us which parent took more responsibility for the young. Based on the size of the egg clutches and the bones of the parent, Varricchio thinks that it was the males that cared for the babies. And given that small, predatory dinosaurs were the ancestors of modern birds, fatherly care was probably also the norm for the earliest members of our feathered friends.

Of all the back-boned animal groups, none show a greater equality of parental care that the birds. Among mammals, the next generation is mainly the mother's responsibility and fathers help out in less than 5% of species. By comparison, male birds help to care for eggs and chicks in over 90% of living species. But Varricchio (together with Norrell and others) argues that this joint parenting is not how the dynasty started off.

The team noted that the clutches so delicately incubated by Troodon, Oviraptor and Citipati contained a substantial number of eggs, about 22 to 30 eggs apiece. Compared to most of the 433 living birds and crocodilians whose clutch sizes have been studied, the dinosaurs were sitting on far more eggs than animals of their size normally do. The team found that species where both parents chip in, or where mum takes the lead, usually settle for smaller clutches. Only those where dad does almost all of the work tend to rear such large broods.

Among living birds, fatherly care is practised among some of the earliest groups to have evolved - the tinamous of South America and the large, flightless ratites, including the ostrich, emu, rhea and kiwi. A male ostrich, for example, guards a communal nest containing eggs from his many partners, each of whom will mate with many males. He incubates the eggs, raises the hatchlings and defends them aggressively. 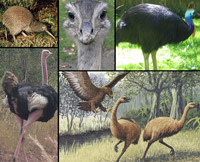 With daddy standing watch and foraging, females can devote more of their energy to actually producing and laying eggs. That allows individuals to lay more eggs, which can then be pooled together to form mega-clutches. Varricchio thinks that the large nests of dinosaurs like Troodon were also communal ones that included eggs laid by many different females. Troodon and Oviraptor eggs are also relatively larger than those of bigger predatory dinosaurs like Allosaurus, and Varrichio suggests that the energetic demands of producing and incubating bigger eggs may have driven the evolution of male-only parenting among small predatory dinosaurs in the first place.

Another clue suggests that the dinosaurs atop the fossil eggs were male. When the time comes to reproduce, female birds lay down a special layer of spongy tissue called medullary bone in the long bones of their limbs. Rich in calcium and phosphorus, medullary bone provides birds with the minerals they need to lay strong-shelled eggs. As they lay and these minerals are used up, the tissue is slowly absorbed back into the body.

Many dinosaurs had medullary bone too, including Tyrannosaurus, Allosaurus, and Tenontosaurus, all of which are more distantly related to birds than Troodon, Oviraptor or Citipati. This means that the females of these smaller species should also have traces of this special tissue during the reproductive season. But none of the fossils that Varricchio looked at did, nor did they have the large cavities needed to reabsorb the tissue after eggs are laid.

Alone, the absence of medullary bone doesn't guarantee that the incubating individuals were male - they could have been females that had either gone past sexual maturity or hadn't reached it yet. A few modern birds also lack medullary bone in both genders, but their food provides them with all the minerals they need to produce eggs. But the fossilised eggs were so large and numerous that it's difficult to envisage how a female could have found enough mineral-rich food without help from a partner.

Together, these two lines of evidence strongly suggest that for the dinosaur ancestors of modern birds, the burden of parental responsibility fell almost exclusively upon father. The earliest birds probably behaved in a similar way, with the more equal partnerships of most modern species evolving much later. Certainly, male-only parenting seems to have predated the evolution of flight.

It's a bit of a surprise result - until now, many camps had argued that the females of the earliest bird speciesworked alone to care for young. Certainly, female-only care is par for the course among crocodilians, the closest living evolutionary cousins of birds. But Varricchio's arguments are strong and the fact that ratites and tinamous - the earliest branches on the bird evolutionary tree - also practice male-only parenting only strengthens his position.

The ancestors of these groups started to diversify into a range of species before the dinosaurs died out and the fact that they have all retained a male-only system of parenting is remarkably resistant to evolutionary change. The breeding methods of today's ostriches are an modern echo of those practiced by Oviraptor and co, many million years earlier. We can only wonder about what the dinosaurs will tell us next about the origins of bird biology and behaviour.