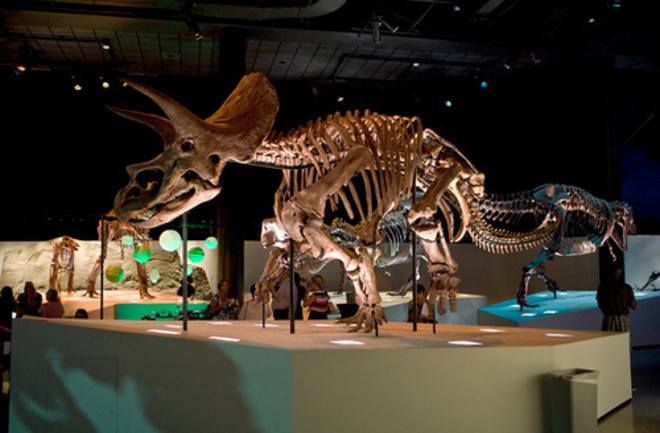 The most complete triceratops skeleton yet found is shown here on display at the Houston Museum of Natural Science. Paleontologists digging in northeastern Wyoming have uncovered fossilized remains of three triceratops---possibly the most complete specimens of the dinosaurs yet found. The triceratops bones were initially discovered by a rancher who owns the land in Newcastle, Wyo., just west of Mt. Rushmore. What is grassland today would have looked more like a subtropical flatland when the dinosaurs called it home during the Cretaceous period. So far the dig has uncovered bones from three triceratops---two adults and a juvenile about half their size. The largest of the three skeletons is also the most complete. In fact, it is a contender for the most complete triceratops skeleton ever found. Only three other fossil specimens are more than 50 percent intact. The main competition, with 76 percent of its skeleton, is on display at the Houston Museum of Natural Science, according to CNN. The dig began in May, and will hopefully be wrapped up in a month, if the rains don't further delay the dig, reported the Rapid City Journal. Paleontologists think the three dinosaurs may have been a family, which could offer new insights into triceratops behavior and development. But there isn't a happy ending to their story. Some of the largest dinosaur's bones appear to have been bitten through, and researchers from the Black Hills Institute of Geological Research are pointing fingers at Tyrannosaurus rex, CNN reported. Researchers think the area the triceratops called home also served as a T. rex feeding ground, and that these newfound fossils may help them find out more about the interactions between these two well-known but little-understood species of dinosaur.