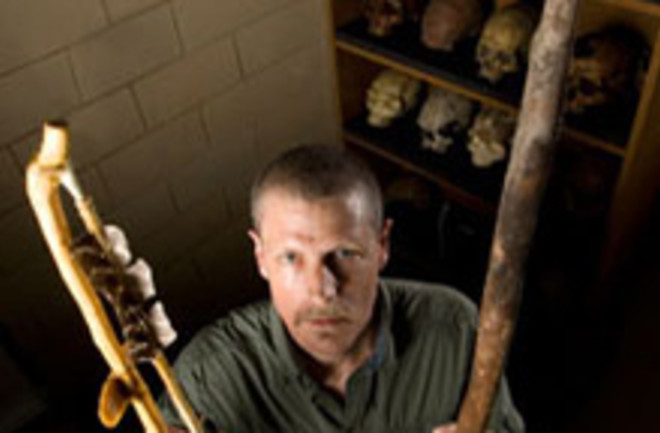 Analysis of a Neanderthal skeleton known as Shanidar 3 found in the late 1950s shows that the he likely died from injuries incurred by a thrown spear, which scientists speculate was thrown by a modern human, according to a study published in the Journal of Human Evolution. Although a nicked rib on his left side provided a hint as to what killed Shanidar 3, scientists remained stumped on the details for decades. To find a probable cause of death for the Neanderthal, the researchers

used a specially-designed crossbow to fire stone-age projectiles at precise velocities at pig carcasses.... At kinetic energies consistent with a thrown spear, the pig's rib bore damage consistent with Shanidar 3's isolated rib puncture [Time]. Higher kinetic energies that matched a knife or spear thrust produced more massive rib damage than that sustained by Shanidar. The scientists also found that the weapon entered Shanidar's body from about 45 degrees above his body, provided the 5-foot-6-inch Neanderthal was standing at the time.

No one knows why Neanderthals disappeared, but they did so around the time modern humans began to spread from Africa across the globe. That has led some to speculate that our ancestors played a role in Neanderthals' extinction. In the specific case of Shanidar 3, because modern humans are thought to have

Still, this case from the files of CSI Stone Age is far from closed. Other scientists have theorized that Neanderthals and humans not only got along, but interbred.

Although evidence of a human-Neanderthal murder remains scant,

another Neanderthal skeleton dating back some 36,000 years and found in France showed signs of a scalp injury likely caused by a sharp object that may have been delivered by a modern human at the time, [lead author Steven] Churchill said. "So if the Shanidar 3 case is also a case of inter-specific violence and if Shandiar 3 overlaps in time with modern humans, we're beginning to get a little bit of a pattern here," Churchill said [LiveScience]. More-exact carbon dating of the remains could provide stronger evidence for Neandercide, since Shanidar 3 is estimated to have lived between 50,000 and 75,000 years ago; modern humans began to spread around 50,000 years ago.

80beats: Neanderthal Mothers Had It Tougher Than Modern Moms

80beats: Neanderthal Tools Were a Match for Early Homo Sapiens