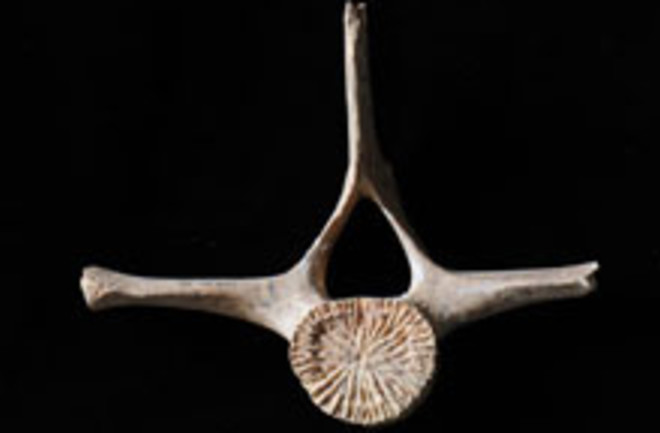 Neanderthals living in coastal caves in Gibraltar hunted and feasted on seafood, researchers say, adding another piece of evidence to the argument that Neanderthals weren’t outmatched and driven to extinction by more skilled and sophisticated Homo sapiens. “I don’t think that the success of one or the other had to do with subsistence, with the way they hunted or fed,” [researcher Clive] Finlayson said. “There may be other factors coming into this, or it may just have been a question of luck” [National Geographic News].

The discovery of seal, dolphin and fish remains in the caves dating from 60,000 to 30,000 years ago provides the first evidence that Neanderthals ate sea mammals as well as land grub. Archaeologists found the mammals’ remains among Neanderthal hearth sites in Vanguard and Gorham’s Caves on the Rock of Gibraltar. The bones of some of the animals have cut marks that were likely made by Neanderthals using flint knives, also found on site, to cut the meat off [LiveScience].

The researchers’ report, published in the Proceedings of the National Academy of Sciences [subscription required], describes hearth sites containing a mix of bones from marine and land animals, including boars and bears, which suggests a degree of flexibility in the Neanderthals’ diets and habits. But the study sheds no light on how Neanderthals managed to capture seals and dolphins, says palaeontologist Erik Trinkaus…. “Seals have a very good escape mechanism. It’s called swimming,” he says. Neanderthals may have hunted young seals during the breeding season, when they were more likely to be found near land, while beached dolphins would have been easy prey for the spear-wielding hunters [New Scientist].

Previous research by Finlayson’s team has suggested that Neanderthals may have made their last stand at these Gibraltar caves; they used radiocarbon dating of pieces of charcoal to determine that Neanderthals occupied the caves as recently as 28,000 years ago. Given the diverse diet, “it may therefore be no coincidence that they survived longest in this part of the world,” said Prof Finlayson [Telegraph].

Read about one scientist’s attempt to reconstruct the Neanderthal genome in the DISCOVER article, “Will We Ever Clone a Caveman?”