Neanderthal Tools Were a Match for Early Homo Sapiens' 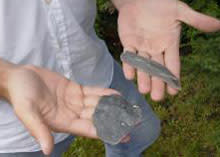 Archaeologists have recreated the stone tools made by Neanderthals, and found them to be as useful and efficient as those made by the earliest Homo sapiens, who survived while the Neanderthal line died off. The new research is one of many recent studies claiming that Neanderthals weren't just dumb brutes that were out-competed by early humans. Says lead researcher Metin Eren:

"When we think of Neanderthals we need to stop thinking in terms of 'stupid' or 'less advanced' and more in terms of 'different'" [Guardian].

Other recent studies have argued that Neanderthals hunted and communicated as well as the early Homo sapiens who arrived in Europe, where the Neanderthals already lived, about 45,000 years ago. But some archaeologists still believed that Homo sapiens had a technological advantage, because they used long stone tools called blades, as opposed to the Neanderthals' disk-shaped flakes. In the new study,

In the end, Eren determined that the Neanderthals' tools may have even had a slight edge over Homo sapiens tools.

Disc flakes, Eren's team discovered, waste less rock, suffer fewer breaks and have more cutting edge for their mass compared with straight blades. "We found that with every respect the Neanderthal technology was just as efficient, if not slightly more efficient, than modern Homo sapiens blade technology," he says. "This was a very strong indication that Neanderthals did not go extinct because of any cognitive inferiority" [New Scientist].

The study, which will be published in the Journal of Human Evolution [subscription required], found only one possible advantage to Homo sapiens' blades: They could be easily attached to a shaft to make a spear or projectile. Eren doesn't believe that difference is enough to explain the disappearance of the Neanderthals from Europe by about 30,000 years ago, but other archaeologists have proposed it as a contributing factor. One such theory involves Neanderthals' tools and abrupt climate changes in early Europe; read about it in the DISCOVER article, "Who Killed the Neanderthals?" Image: Metin Eren Related Post: Give Neanderthals Some Credit: They Made Nice Tools