Did Humans Make Tools, or Did Tools Make Humans? 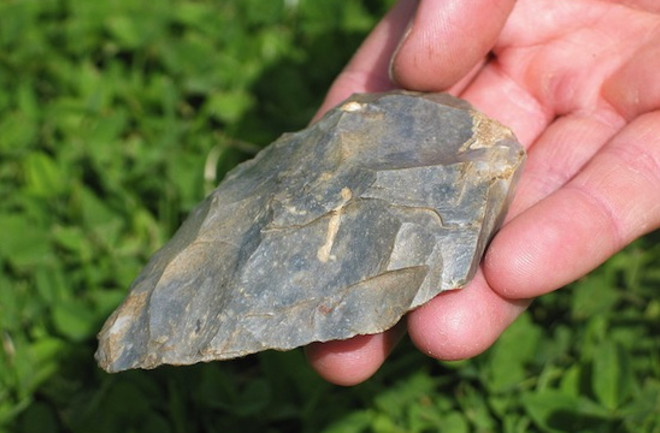 Is our species, Homo sapiens sapiens, the first cyborg species? Gizmodo/New Scientist has a fascinating article up about how humans evolved as a result of technology. Timothy Taylor, an anthropologist and archaeologist at the University of Bradford in the United Kingdom, submits a theory I am very inclined to believe: thathumans evolved from tool-using proto-human primates. This evolutionary path resulted in a "survival of the weakest," which Taylor explains:

Technology allows us to accumulate biological deficits: we lost our sharp fingernails because we had cutting tools, we lost our heavy jaw musculature thanks to stone tools. These changes reduced our basic aggression, increased manual dexterity and made males and females more similar. Biological deficits continue today. For example, modern human eyesight is on average worse than that of humans 10,000 years ago. Unlike other animals, we don't adapt to environments - we adapt environments to us. We just passed a point where more people on the planet live in cities than not. We are extended through our technology. We now know that Neanderthals were symbolic thinkers, probably made art, had exquisite tools and bigger brains. Does that mean they were smarter? Evidence shows that over the last 30,000 years there has been an overall decrease in brain size and the trend seems to be continuing. That's because we can outsource our intelligence. I don't need to remember as much as a Neanderthal because I have a computer. I don't need such a dangerous and expensive-to-maintain biology any more. I would argue that humans are going to continue to get less biologically intelligent.

Taylor is not alone in his belief that technology of some kind came before Homo sapiens. Richard Wrangham's book Catching Fire: How Cooking Made Us Human, argues that the human-making tech was fire and cooked food. Easier to digest and less likely to cause disease, cooked food allowed for a smaller digestive tract to provide the immense amounts of energy required by our bigger brains. Both Taylor and Wrangham could be correct. In fact, many various technologies may have combined over time to allow and influence our evolutionary path. Both Wrangham and Taylor's findings support the thesis that humans are, paradoxical as it may seem, technological by nature. As I stated last year in my IEET post "We Have Always Been Transhuman":

What is so staggering about this revelation is that it means humans are not the product of evolution the way other primates are in that humans, should [Taylor and] Wrangham’s theory hold, are the evolutionary result of technological pressure and selection on a species. Erectus evolved from habilus due to technology and, concurrently, sapiens evolved as a species maximized to use technology. So, if technology is natural, and we (Homo sapiens sapiens) are a natural product of technology, then whither the boundary between the two? Is it us?

In other words, to be human is to be cybernetic. Humans are a species born of technology. Whoa.