Did a Comet Cause the Great Flood?

The universal human myth may be the first example of disaster reporting. 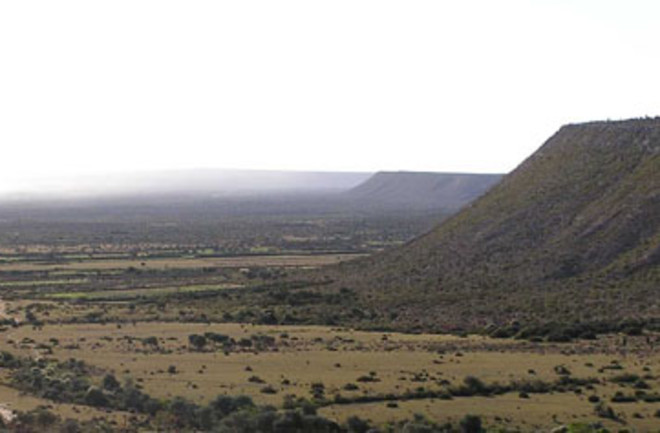 The Fenambosy chevrons at the tip of Madagascar. | Image courtesy of Dallas Abbott

The serpent’s tails coil together menacingly. A horn juts sharply from its head. The creature looks as if it might be swimming through a sea of stars. Or is it making its way up a sheer basalt cliff? For Bruce Masse, an environmental archaeologist at Los Alamos National Laboratory, there is no confusion as he looks at this ancient petroglyph, scratched into a rock by a Native American shaman. “You can’t tell me that isn’t a comet,” he says.

In Masse’s interpretation, the petroglyph commemorates a comet that streaked across the sky just a few years before Europeans came to this area of New Mexico. But that event is a minor blip compared to what he is really after. Masse believes that he has uncovered evidence that a gigantic comet crashed into the Indian Ocean several thousand years ago and nearly wiped out all life on the planet. What’s more, he thinks that clues about the catastrophe are hiding in plain sight, embedded in the creation stories of cultural groups around the world. His hypothesis depends on a major reinterpretation of many different mythologies and raises questions about how frequently major asteroid impacts occur. What scientists know about such collisions is based mainly on a limited survey of craters around the world and on the moon. Only 185 craters on Earth have been identified, and almost all are on dry land, leaving largely unexamined the 70 percent of the planet covered by water. Even among those on dry land, many of the craters have been recognized only recently. It is possible that Earth has been a target of more meteors and comets than scientists have suspected.

Masse’s epiphany came while poring over Hawaiian oral histories regarding the goddess Pele and wondering what they might reveal about the lava flows that episodically destroy human settlements and create new tracts of land. He reasoned that even though the stories are often clouded by exaggerations and mystical explanations, many may refer to actual incidents. He tested his hypothesis by cross-checking carbon-14 ages for the lava flows against dates included in royal Hawaiian genealogies. The result: Several flows matched up with the specific reigns associated with them in the oral histories. Other myths, Masse theorizes, hold similar clues.

Masse’s biggest idea is that some 5,000 years ago, a 3-mile-wide ball of rock and ice swung around the sun and smashed into the ocean off the coast of Madagascar. The ensuing cataclysm sent a series of 600-foot-high tsunamis crashing against the world’s coastlines and injected plumes of superheated water vapor and aerosol particulates into the atmosphere. Within hours, the infusion of heat and moisture blasted its way into jet streams and spawned superhurricanes that pummeled the other side of the planet. For about a week, material ejected into the atmosphere plunged the world into darkness. All told, up to 80 percent of the world’s population may have perished, making it the single most lethal event in history.

Why, then, don’t we know about it? Masse contends that we do. Almost every culture has a legend about a great flood, and—with a little reading between the lines—many of them mention something like a comet on a collision course with Earth just before the disaster. The Bible describes a deluge for 40 days and 40 nights that created a flood so great that Noah was stuck in his ark for two weeks until the water subsided. In the Gilgamesh Epic, the hero of Mesopotamia saw a pillar of black smoke on the horizon before the sky went dark for a week. Afterward, a cyclone pummeled the Fertile Crescent and caused a massive flood. Myths recounted in indigenous South American cultures also tell of a great flood.

“These stories are all exactly what you would expect from the survivors of a celestial impact,” Masse says, leafing through 2,000-year-old drawings by Chinese astronomers that show comets of all shapes and sizes. “When a comet rounds the sun, oftentimes its tail is still being blown forward by the solar winds so that it actually precedes it. That is why so many descriptions of comets in mythology mention that they are wearing horns.” In India, he notes, a celestial fish described as “bright as a moonbeam,” with a horn on its head, warned of an epic flood that brought on a new age of man.

Among 175 flood myths, Masse found two of particular interest. A Hindu myth describes an alignment of the five bright planets that has happened only once in the last 5,000 years, according to computer simulations, and a Chinese story mentions that the great flood occurred at the end of the reign of Empress Nu Wa. Cross-checking historical records with astronomical data, Masse came up with a date for his event: May 10, 2807 B.C.

On its own, the mythological evidence is weak, as even Masse recognizes. “Mythology can help us hypothesize about events that might have occurred,” he says, “but to prove the reality of them, we have to go beyond myths and search for physical evidence.”

In 2004, at a conference of geologists, astronomers, and archaeologists, Masse outlined his evidence for a world-ravaging impact in the middle of the Indian Ocean. Ted Bryant, a geomorphologist at the University of Wollongong in New South Wales, Australia, was intrigued and enlisted the help of Dallas Abbott, an assistant professor at the Lamont-Doherty Earth Observatory at Columbia University. In 2005, they formed the Holocene Impact Working Group (referring to the geological period covering the last 11,000 years) to seek out the geological signatures of a megatsunami. If a 600-foot-high wave ravages a coastline, it should leave a lot of debris behind. In the case of waves generated by asteroid impacts, the debris they leave in their wake is believed to form gigantic, wedge-shaped sandy structures—known as chevrons—that are sometimes packed with deep-oceanic microfossils dredged up by the tsunami.

When Abbott began searching satellite images on Google Earth, she saw dozens of chevrons along shorelines and inland in Africa and Asia. The shape and size of these chevrons suggest that they might have been formed by waves emanating from the impact of a comet slamming into the deep ocean off Madagascar. “The chevrons in Madagascar associated with the crater were filled with melted microfossils from the bottom of the ocean. There is no explanation for their presence other than a cosmic impact,” she says. “People are going to have to start taking this theory a lot more seriously.” The next step is to perform carbon-14 dating on the fossils to see if they are indeed 5,000 years old.

Meanwhile, Bryant contends that chevrons found (pdf) 4 miles inland from the shore of Madagascar were formed by a wave that traveled 25 miles along the coast, moving almost parallel to the shoreline. “Neither erosion nor any other terrestrial process could have caused these formations. The biggest marine landslide ever recorded happened 7,200 years ago off the coast of Norway, and there was a tsunami, but it was a far cry from leaving deposits 200 meters above sea level,” Bryant says.

Not everyone is convinced, to say the least. “I don’t believe the evidence of a crater off Madagascar, and the impetus is on Abbott to prove it,” says Jay Melosh, an impact expert at the University of Arizona and an outspoken critic of the theory. To make a case for the impact, Melosh says, Abbott “should be finding layers of glassy droplets and fused rock in sea-core samples, the sorts of things we find at all other similar impact sites.”

On the other hand, a lot remains unknown about impacts. As recently as 60 years ago, some geologists believed that the Barringer Meteor Crater in Arizona—now considered the prototypical impact scar—was caused by a volcanic explosion, and they regarded impacts as a minor if not inconsequential influence on Earth’s history. Just 25 years ago, Luis and Walter Alvarez raised eyebrows with their idea that an asteroid collision helped kill off the dinosaurs. So Abbott continues to hunt for evidence that will clinch the idea that Noah’s flood was yet another example of extraterrestrial meddling. “It is still up to us to prove it, but if we have unequivocal impact ejecta,” she says, Melosh “is going to have to eat his words.”